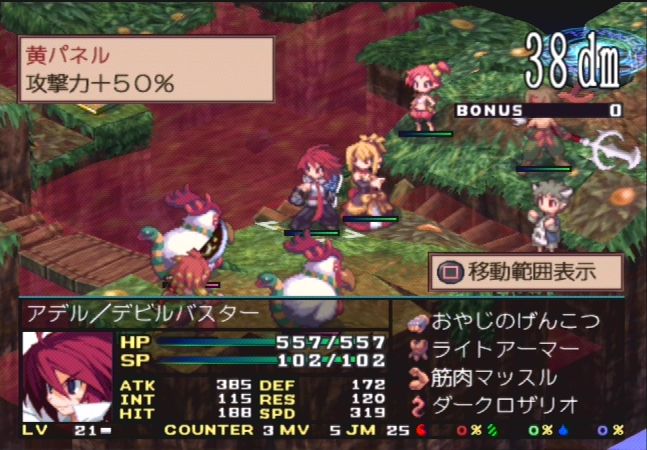 Disgaea 2 is the first true sequel to any of the Nippon Ichi strategy games. Even though the basic gameplay system is pretty much the same as Disgaea (no confining or free-movement, which should please those who hated them), there’s enough that’s different (and improved) from the original to make it stand on its own. For starters, Disgaea 2 introduces an entirely new set of main characters. For those that miss Prince Laharl, Flonne and folks – well, the new cast isn’t QUITE as charming as the old guys, but they’re still a fun gang, and there are plenty of cameos to keep fans of the original happy. 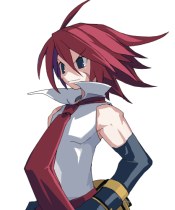 The hero of the game. Adell’s world has been enslaved by the evil overlord Zenon, and while everyone has slowly begun turning into demons, Adell is still human. He seeks to free his land and destroy Zenon at whatever cost. 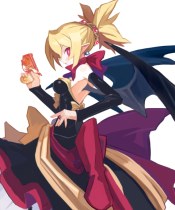 Adell’s mother tries to summon Zenon to give him a good talking to, but instead gets his estranged daughter, Rozalin. She has no idea where her own dad is, so she latches onto Adell and his quest. She’s a bit spoiled and naive, but wields a mean gun. She constantly fights with Adell, and attempts to kill him, despite the obvious sexual tension. 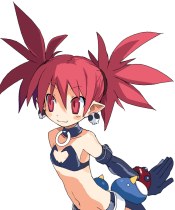 Etna’s back, although she’s your foe through the early portion of the game. She seems convinced that Rozalin has strength equal to her father which doesn’t exactly seem to be true. Etna eventually joins to steal Zenon’s power for herself. Naturally, her Prinny Squad makes a return as well. 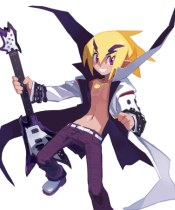 Axel is a dimwitted ex-rock star who attempts to quell the rumors of his death (and takes on the role of the brain-addled nemesis, a la Mid-Boss from Disgaea and Alexander from Makai Kingdom.) He stars in a Z-grade travel TV show and lugs around his poor director everywhere, hoping to get some nice shots for his upcoming revival. 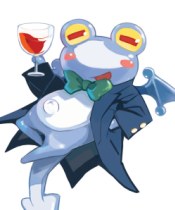 This guy is a flying, schizophrenic frog who wields a baseball bat, who also has a thing for wine and talks in a funny accent. He used to be one of Rozalin’s friends until he was cursed with his current form. 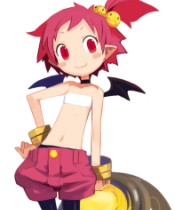 Adell’s little sister seems to be pretty excited to join along in the fight. She seems to have morphed into a standard demon. 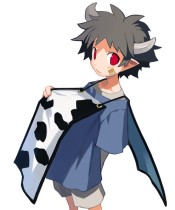 On the other hand, Adell’s young brother, Taro, isn’t nearly as enthusiastic, and is a bit on the shy side. He seems to have morphed into some kind of cow. 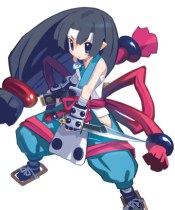 Yukimaru is a samurai who tends to take herself a bit too seriously. She’ll threaten seppuku at a moment’s notice. She also has a brother that eventually gets tangled upon with your party. In Japanese, she talks with an overly formal, medieval way of speaking (similar to Cyan in Final Fantasy VI and Himura Kenshin in Rurouni Kenshin.) In English, she has a weird speech pattern and tacks “zam” on at the end of every sentence. 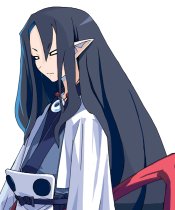 Yukimaru’s older brother, Fubuki is another samurai with extremely powerful magic. He is blind – both literally and figuratively – in his attack against Zenon. 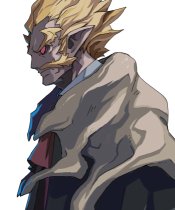 The extremely powerful overlord, and father of Rozalin. Of course, nothing is straightforward as it initially seems… 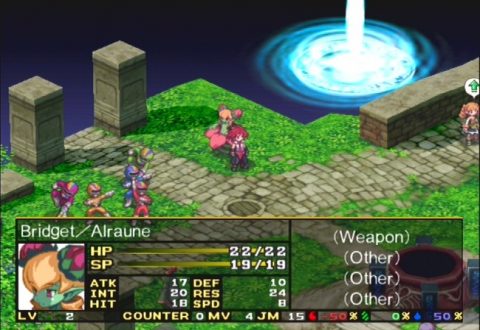 Like Disgaea, the plot is pretty threadbare through most of it – Adell and pals just kinda wander around, getting into shenanigens in their search for Zenon, picking up new recruits along the way. The biggest problem is that Adell and Rozalin just aren’t very interesting characters, but at least the supporting cast is available to pick up the slack. The Prism Rangers return, and the cute TV segments starring Plenair and her little pal Bunny are amusing, but it never quite reaches the humor of the first game. The funniest bit? A feminine looking plant monster named Bridget, who’s actually male, a reference to Guilty Gear.

A number of tweaks have been made to the actual game, of course. The Geo Panel system is back, although this time, certain stones can move on their own, greatly altering your strategy from turn to turn. Regular combo attacks have returned, and look even flashier than the original. You can also pick up and stack several units on top of each other, then attack to execute a “tower” combo. The balance is a little bit better – you can only equip one weapon and three accessories – plus the AI also seems to have improved a bit as well. And now, healers can actually gain experience by casting curative magic instead of trying to kill stuff, which makes them a bit easier to level up. The Dark Assembly has also returned, except this time you can drug them or slip them some booze. You can even appoint yourself to the council to swing the vote in your favor.

It’s also where you find the Prinny Court – after reaching certain milestones, like killing too many bad guys or gaining attack power to quickly, you’ll be issued a summons to the court. When you reach it, you’ll be judged, which can either get you bonus items or status boosts. The only problem is that you need to go into the Item World to reach the Prinny Court. Indeed, most of the subquests and extra stuff you can find revolves around the Item World, which can get quite tedious.

For the first time, Disgaea 2 uses high res graphics (480i, for standard def TVs anyway), and the result is a much nicer looking game. It’s mostly noticeable in the background tiles, the character portraits, the text boxes and interface. On the other hand, the sprites still don’t look as nice as they probably, but they’re a step up. There’s also a gorgeous, fully animated intro which introduces the new characters and shows some of the character classes in action. It also includes a catchy vocal theme song, dubbed “Sinful Rose”, and other vocal themes, including a ballad by Axel. The soundtrack is once again composed by Tenpei Sato, and includes several remixes of old Disgaea themes, including a chiptune-style remix of Laharl’s theme.