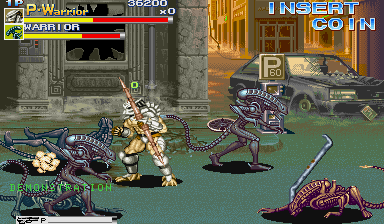 Based on an unproduced movie script, Alien vs. Predator is an arcade side-scrolling beat-em-up that hit arcades in 1994. It’s one of the first games to mash up two separate media licences, after Robocop versus The Terminator the previous year. And what a game it is – Capcom firing on all cylinders at the height of their powers, hot off the heels of Street Fighter II Turbo and Dungeons and Dragons: Tower of Doom, and two of the most revered licences in sci-fi clashing on screen for the first time.

Up to three players can choose between two marines, a Predator Warrior, and a Predator Hunter. In the Californian city of San Drad, the abandoned marines are cornered by a swarm of Alien drones, with no hope of escape. Out of nowhere, two Predators arrive to destroy the Aliens, before offering to help the marines rid the city of the Xenomorphs once and for all. From there, you quickly get sucked into a conspiracy that may be closer to home than first thought. The writing is solid gritty sci-fi fare that suits the game well.

The younger Predator, Hunter has similar stats to Warrior, boasts an effective diving attack, but lacks recovery, priority, and range in some of his offense.

The more experienced Predator, Warrior is the most balanced fighter in the game with a longer range attack compared to his partner.

The game’s tank character and based on Arnold Schwarzenegger’s character from the first Predator movie, Schaefer is the strongest player character, but also the slowest.

The fastest and most agile fighter in the game, Linn is a cyborg whose programming gives her access to every martial art. 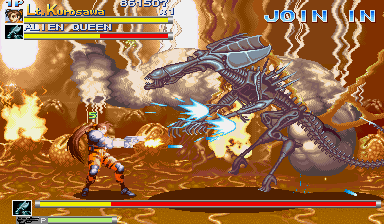 A big part of the fun of Alien vs. Predator is that, beyond just stats, each character plays so differently. With a distinct melee weapon (Warrior an extendable/retractable spear, Hunter a bladed staff, Linn a katana, and Dutch his steel fists) and projectile attack, as well as differences to range and standard movesets, there’s a ton of replayability here as you master each fighter.

The sprites are typical mid-90s Capcom: big, bold, colorful, with bags of character. The player characters move fluidly, although some of the enemies could do with a couple more frames of animation. The backgrounds contain some wonderful pixel art, all dark and moody sci-fi locations with plenty of depth and detail. As well as every type of Xenomorph you can imagine, you also fight human soldiers and zombies. They’re thrown at you (along with environmental hazards) in enough different patterns and variations that they don’t lose appeal. 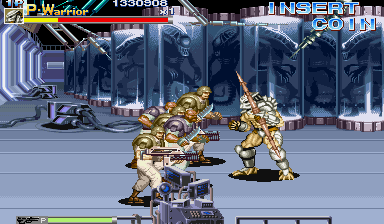 There’s one button for jumping (except for Schaefer, who dashes instead), one for attacking, and pressing one after the other unleashes a flying strike. Pressing both buttons at the same time initiates a special attack that helps if you’re surrounded, but saps your lifebar. There’s also a button for your gun or laser, and it’s here that the game becomes more unique. The key to the game is controlling horizontal and vertical space with your ranged weapon, enabling you to deal with overwhelming amounts of enemies. You are also able to shoot downed enemies before they have a chance to recover. While that may sound easy, there’s a catch: using the gun roots you to the spot, leaving you easy prey if you’ve not timed your attack correctly. Spamming the attack also leads to the weapon either overheating or needing to be reloaded, again making you vulnerable. Having to mix-up tactics on the fly is a big part of what makes the game so unique and fun, and if you take damage you usually only have yourself to blame.

When you’re hit, your melee weapon goes flying, needing you to scramble after it. The same applies to enemies’ weapons, and you’re also able to grab these, letting you play with guns, knives, grenades, a flamethrower, and, best of all, a rocket launcher. It’s a great feature that would be used to similar effect in Armored Warriors, released later that year. Dutch again plays a little differently; instead of throwing melee weapons, he holds onto them, making him an imposing force. You can also pick up jewels and gold for bonus points, foodstuffs to replenish health, and a special icon that grants you unlimited use of your gun.

Alien vs. Predator gets pretty tough in later levels, although extra lives can be earned when you score a certain number of points, and there are eight difficulty levels, both adjusted by dipswitches. 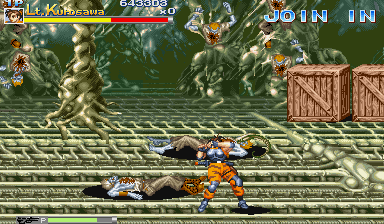 There are seven stages, with you being immediately thrown into the action against a huge horde of Alien grunts. Continuing though San Drad’s streets and container yard, you meet the first boss, Chrysalis, an Alien with a hard exoskeleton and deadly spin attack. Level 2 see you beneath the city, before a showdown with Razor Claws, a purple Xenomorph with blades on its fingertips. The brief third stage sees you atop an APC mowing down extra-terrestrials Metal Slug-style. An old subway station that now houses an alien hatchery is the setting of level 4, leading you to the first fight with the Alien Queen. It’s here that the game missteps, restricting you to one plane of movement, against a boss with spammy attacks as Alien grunts appear left and right. Thankfully, the fifth stage is a lot of fun – you’re in a jungle surrounded by marines, both dodging fire and blasting back, with it feeling almost like a shoot-em-up at times. A battle with a Power Loader greets you at the end. The penultimate level takes you through a maze of corridors before another Predator blocks your path, leading to a boss fight that is memorable, if a little cheap. The final stage pits you against a mini boss gauntlet aboard a Weyland spaceship as you aim to take the Alien Queen for good, in a skirmish much better than the first.

The music was composed by Hideki OK (Hideki Okugawa), best known for writing the tunes for all three Street Fighter III games. Alien vs. Predator was his first work for Capcom, and he starts strong; from eerie synthy ambience to tracks that are almost orchestral, the music fits the game perfectly. The sound effects are also satisfying, with the crunchy and meaty thwack you’d expect. 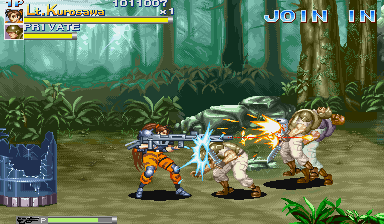 Alien vs. Predator received great reviews at release, and a 1995 port was planned for the Sega 32X. Sadly, it never came to fruition. Similarly, the movie script (based on the Alien vs. Predator comic series) never made it to the screen, with the 2004 film having a different story altogether. A game with the same name was released for the Super Nintendo in 1993, which was developed by Jorudan, published by Activision, and has nothing to do with the arcade game at all. Capcom revealed in 2013 that the arcade game is the HD port of a retro game they receive the most requests for, but alas, was still left off of the 2017 Capcom Beat-em-up Bundle, presumably due to licensing issues. However not just two years later in 2019 Capcom did manage to license and include Alien vs. Predator in their Capcom Home Arcade marking an understated if welcome return for the classic beat’em up.

Lieutenant Kurosawa has made several cameo appearances, appearing in both Ken’s level in Street Fighter Alpha 2 and Ryu’s level in Street Fighter III. In Namco x Capcom, Sylphie (the shopkeeper from Forgotten Worlds) turns into Kurosawa during her super attack. Tetsuhiko ‘Han’ Kikuchi, former Treasure designer, has gone on record to say Alien vs. Predator was one of the inspirations for Guardian Heroes, with the makers of River City Ransom: Underground also citing it as an influence. 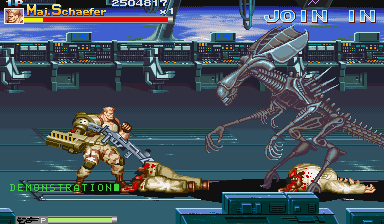 Toy company NECA gained the licence to produce figures based on the game in 2017, and they are truly handsome, with a ton of detail and retro packaging inspired by the arcade game’s cabinet art. While only the Aliens and Predators were in the initial batch, figurines of Dutch and Linn were released the following year.