The “Earnest Evans Series” is a trilogy of games for the Genesis and Mega CD, created by Wolf Team and published in the US by Renovation. Two of the games star a green haired girl named Annet Myer, with her heroic pal Earnest only appearing in cutscenes. 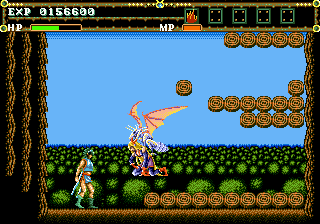 Like most of the Wolf Team games back in the early ’90s, the games aren’t particularly great, but there’s some haphazard fun to be had with them. They also feature soundtracks by Motoi Sakuraba – later known for Tri-Ace games like Star Ocean and Valkyrie Profile – and the CD versions feature some cool cutscenes. Just like Valis, these games weren’t above banking on their cheesecake appeal, although it’s not quite as pervasive. The character designs are by artist Kazutoshi Yamane, who worked on a manga called Gamble Fish, amongst others unfamiliar to the Western world, in addition to other Telenet games like Arcus Odyssey. 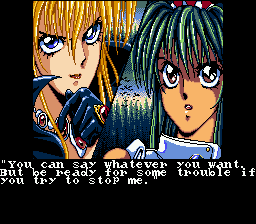 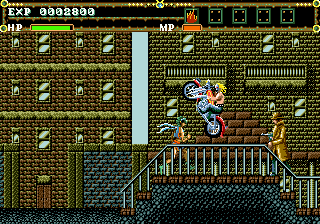 Even though they were produced by different teams, El Viento is strikingly reminiscent of the Genesis versions of the Valis games – it has the same art style (right down to the faceless heroine) and same loose control style. But damned if isn’t a lot of fun. “El Viento” is Spanish for “The Wind,” and the action moves at an extremely brisk pace. Annet blazes forward, rapidly attacking with boomerangs that can demolish practically anything in a few hits. Annet also has some magical powers, which are charged by holding down the Magic button. You start with only a measly fireball, but you obtain different powers (ice crystals, power waves, etc) as you get farther in the game. However, since you need to charge to use them, they’re generally only useful in very specific situations. Annet can also glide by ducking and pressing the jump button, which is useful in a few circumstances where the ceiling is too low to jump. The score also acts as “experience,” which will extend the life meter at certain intervals. 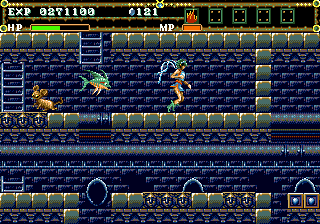 The hook of El Viento is that it takes place in America circa the 1920s. In the first stage, you fight against gangsters in Chicago, though later levels take you to secret caverns underneath Mount Rushmore and through the streets of New York City. Annet needs to stop a cult, including a gangster named Vincente DeMarco (who’s actually Al Capone in the Japanese release – too bad they took out the silly historical reference for the English version) from resurrecting the evil Lord Hastur (a reference to the Cthulu mythos). It’s really hard to dislike a mashup of concepts that is this utterly insane. 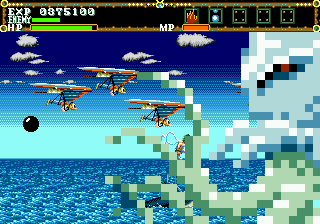 Annet also faces a scantily clad rival named Restiana, who’s really just an excuse to show more skin. Along the way she also meets her mentor Earnest Evans, although he doesn’t really have any effect in the game – he just exists to tie in with the “sequel,” released less than a year later. 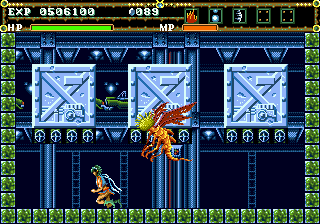 Outside of the cutscenes, though, most of the stages look like your standard video game settings – warehouses, caves, sewers and such. While the graphics themselves aren’t all that impressive, the explosions attempt to emulate the Mode 7 scaling effects of the SNES. They’re huge and pixellated, but actually look pretty cool. In fact, random objects and bad guys explode for no good reason, which is really, really awesome. However, the same effect is used on a giant squid in the sea level, which consists of pixels that are almost as large as Annet, which is a bit silly-looking. Some of the bosses are pretty cool, especially the huge, amorphous blob that molds its shape when you attack. It’s very similar to the mid-boss in the Spark Mandrill stage in Mega Man X. Other than these bits of graphical trickery, though, the graphics aren’t that hot, and the music is pretty forgettable. 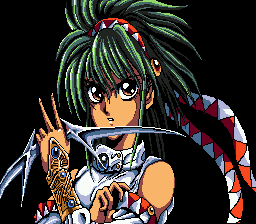 Overall, it’s a bit of a sloppy game, with haphazard action and iffy level design, but the fast pace and overall craziness make this worth looking into, especially since it ends being one of Wolf Team’s better titles. And it has bouncing little guys dressed as pirates as bad guys, which definitely earns it some respect for its goofiness.