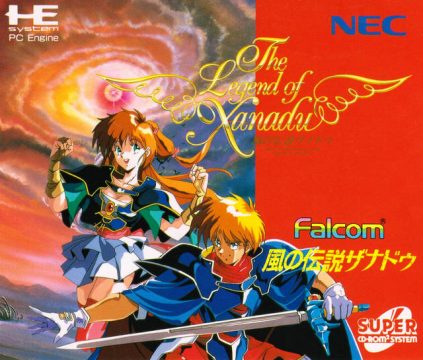 While Falcom’s games were a huge success on video game consoles, particularly their Ys series, they were primarily a computer developer, and all of those other versions were licensed and developed by third parties like Hudson. Seeking to find their own success with a wider audience, they developed and published Kaze no Densetsu Xanadu for the PC Engine Super CD platform. Much like the Ys games, they took advantage of the CD platform, offering huge worlds, expansive cutscenes with lots of colorful characters, and voiced dialogue. It was heavily promoted at the time of release, with a manga based on it, and is remembered as one of the hallmark RPGs on the platform. The title technically translates to “Legend of the Wind: Xanadu”, but the official English translation is simply “The Legend of Xanadu”. It’s considered the seventh part of the Dragon Slayer series, though like all of the others, there’s very little connections to its PC forbears, and almost nothing to do with the original Xanadu. Indeed, it’s not even referenced by name, though the intro theme does include an arrangement of “La Valse Pour Xanadu”. 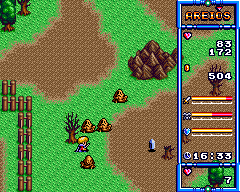 The game takes place in world where magic use is commonplace. As the story goes, 1000 years ago, the legendary hero Aeneas fought the dragon Daldantis. He won and became the king. His descendent, Areios, is a soldier in the imperial city of Ishtar, and he must follow in the footsteps of his forefathers. Some of the visuals and the character names are taken from Greek mythology, although these references are skin deep. The official English romanizations are also a little different from what the Greek names would be (“Daimos” in the game instead of “Deimos”, for instance.)

Legend of Xanadu is very similar to the Ys series, as the “ram into bad guys” combat system (and even the accompanying sound effects) are exactly the same. You can set the speed pretty high, so it moves much faster, but it shares the same simplistic glee of charging straight into legions of bad guys, although money isn’t obtained automatically – you still need to pick up gems. There’s a lot more to the game than an Ys clone, however – you face more enemies at once, and the maps are much bigger. 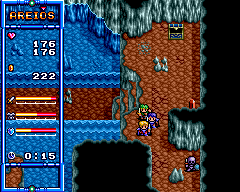 The experience system is a little unusual, and is one of the few areas that borrows from the original Xanadu. You don’t gain levels, per se, but HP maximum is increased as you take damage. The equipment – weapon, armor and shield – also gain experience the more you use them. Although you start the game as the hero Aerios, you eventually gain more party members that fight in formation at his side, creating a veritable wall of destruction.

The game is divided up into twelve chapters, each usually with a number of dungeons and towns, though unlike Ys, you cannot revisit a completed area. The final chapter takes place in a huge 31 floor dungeon, which puts the Tower of Darm from the first Ys to shame. At the end of each chapter, the perspective changes to a short side-scrolling segment. While it seems similar to Ys III, it looks and controls much better. The difficulty in these sections are oddly balanced though, as you can be blasting through enemies without taking a scratch in the overhead segments, but be destroyed by a few quick hits in the side-scrolling stages. While you only control Areios in these scenes, your friends can be called upon to give some quick aid. If a second controller is available, another player can control them in combat.

There are some minor annoyances, and the biggest offender is the excessive amount of fetch questing. You can only progress through the game by triggering certain flags, but it’s not always clear what you’re supposed to be doing or who you’re supposed to talk to. This is a problem even if you can read Japanese. While the characters dash over the landscape with blazing speed, having to run back and forth across the same areas and the same dungeons, talking to everyone is sight, gets really tedious, really quickly. There’s a whole night/day cycle that determines what NPCs do, so trying to blunder into them at the right times just makes everything even more difficult. There is an hourglass that lets you quickly change the time of day, so you don’t need to just sit and wait around.

There are some other odd quirks that separates this from other console JRPGs. Whenever you enter a store, you play a small slot machine game to gamble on the price of the item. Also, when a character dies, they turn into a ghost. This lets them walk where they normally couldn’t, although other than scouting ahead, there’s not much you can do without a corporeal form, so you need to return to a church to be resurrected. These are really interesting concepts, but they also don’t add much function to the game. These aspects are attributed to the developers, particularly Kiya, being more used to the obtuse landscape of computer RPGs, compared to the more streamlined console variations. 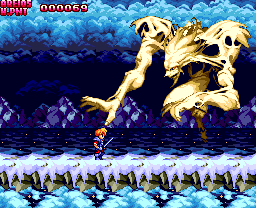 The graphics, outside of the side-view levels, unfortunately aren’t very good, with sprites even smaller than Ys, though the gameplay window is larger. The cutscenes are sparse and not very impressive either. The title screen features chibi renditions of the main characters, which also appear whenever you enter a shop.

Despite being on CD, almost all of the music is chip generated. It’s disappointing compared to the high-powered rocking music of the Ys games, but it doesn’t stop the fact that the music is very, very good. There’s a lot of music too, as the three-disc soundtrack for The Legend of Xanadu has over a hundred tracks. There are a few redbook tracks used in cutscenes, though the arrangements are strangely poor. A separate CD album, The Legend of Xanadu JDK Special, has a handful of tracks arranged with PC-98 synth, in the style of Falcom’s older computer games. 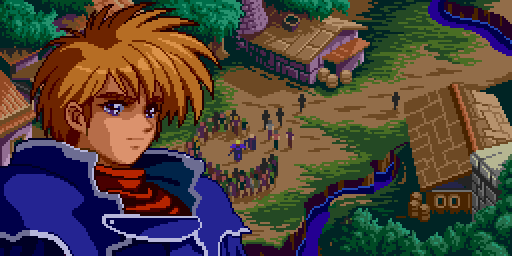 The Legend of Xanadu is an epic quest that’s both huge and challenging, in addition to being tons of gun. As long as you can deal with the fetch questing, the relatively high level of difficulty, and other assorted annoyances, you’ll find one of the PC Engine’s best RPGs. Unfortunately it was also the last game Yoshio Kiya worked on for Falcom before leaving the company, which is why this is the last game in the series to bear the Dragon Slayer name.

While Legend of Xanadu was originally for NEC’s console, there was a DOS version by Digitower released in Korea two years later, with the title Baram-ui Jeonseol Xanadu (which is a direct translation of Kaze no Densetsu). Because it has a slightly higher resolution, the HUD is displayed as an opaque window to the right. Of course it’s also in Korean, but otherwise identical to the PC Engine version. It also found its way back on computers in 2003 as part of the Falcom Special Box 2004. In addition to the game (which is merely an emulated version of the PC Engine version, so it’s exactly the same), it included the entire soundtrack, as well as the Ys VI OST. The game was also released for the Wii Virtual console, but remained exclusive to Japan.