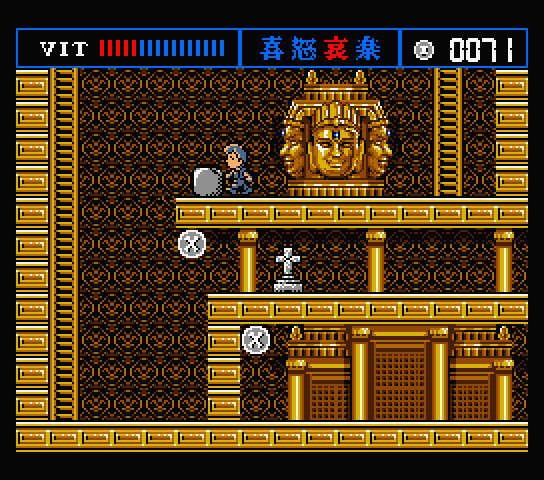 Konami was one of the leading video game developers for the MSX/MSX2 platform, and many of their most famous franchises from the 8-bit era had ports, or even their beginnings on the MSX (such as Castlevania, Metal Gear, Contra and Ganbare Goemon, to name a few). A few of their games, however, did never leave the MSX. One of them is Uşas – or “The Treasure of Uşas” as it is called on the title screen of the English-language version – an archaeology-themed action platformer with a few puzzle elements, that was released in Japan and Europe in 1987. 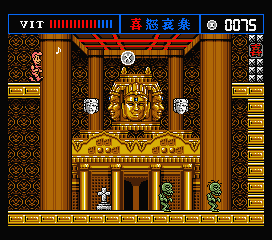 Like many games of its time, the story is presented in different degrees of detail in the game and in the manual. The following story details are taken from the Japanese manual, which is the most elaborate source of documentation for the game. The backstory revolves around the Vedic Mother Goddess Uşas that was once worshiped in the Indus civilization, until she was banished by the war god Indra and the jewel she was carrying was split into four pieces and thrown to the wind. Cut to the present day, where Associate Professor Atley of the Oriental History Department reads in the newspaper that a statue of Uşas has recently been found in India with markings on its forehead from the lost jewel. The department is in financial ruin, and will be forced to close down next year if they cannot raise more funding, so finding this jewel could be the solution to all his problems. In a stroke of luck (or narrative convenience) Atley happens to find an old map in his archive to five ruins that are said to be the last known whereabouts of the four fragments of the gem. He quickly convinces his two students, Wit and Cles, to travel to the Silk Road to try and find the jewel, so that the department can be saved.

The game is at its core a non-scrolling, static-screen platformer with a few obstacle puzzles. However, Uşas is a surprisingly involved game. What sets it apart from other contemporary games in the genre is the emotion system. You can switch the mood of the player character by collecting one of four different emotion kanji: 喜 (Joy), 怒 (Anger), 哀 (Sadness) and 楽 (Ease) (translated in the European manual as Happy, Anger, Sad and Good humor respectively). The moods change how the player character looks, controls and attacks, and also modulate the pitch of the background music up and down by a semitone per mood. Not only do the different emotions drastically change how the player handles, but each stage has a locked door in front of the boss’s chamber that can only be opened if the player has the correct mood. There are also blocks that need to be pushed and dropped from ledges to form structures to reach higher platforms, which combined with how the effects of the mood system improves or limits the players’ mobility, leads to some interesting (but sometimes frustrating) puzzles. 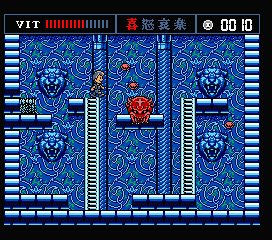 The premise of the game is to explore five different ruins to find the shattered pieces of the jewel, and then reach the statue of Uşas where the jewel will reveal a hidden treasure. Each ruin is basically a hub world with five doors. The first four leads to different multi-screen stages, where the goal is to find the correct emotion that opens the door to the boss’ room, take the key inside and defeat the boss demon. Do this for the four stages and the fifth door in the hub world unlocks. Inside is a single-screen room (The Temple; 神殿) with a statue that holds one of the pieces of the jewel. To no surprise to anyone who has ever seen an Indiana Jones movie, taking the jewel shard will trigger a trap; in this case the statue comes alive and tries to kill you. Once it’s defeated, you’ll proceed to the next ruin in search of the next piece of the jewel. You will also get a password that can be input at the title screen to send you directly to the new ruin. 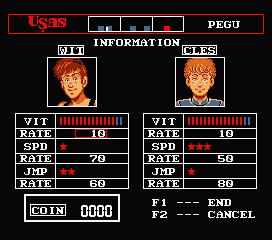 There are two playable characters, Wit and Cles, that each controls slightly different. Wit has a ranged attack (gun) whereas Cles relies on a melee attack (kick) with limited range. On top of this, there is a light RPG system where you can buy improved walking speed and jumping power with coins that can be collected in the stages. The health bar can also be replenished for the cost of 10 coins per bar, and this is the only means of healing. Saving up money for stats and healing will be crucial for making it through the game, especially since each character has his separate stats and health. When a character’s health bar runs out, he will be captured by the boss demon of the stage. If the player manages to beat the boss using the remaining character, both characters will return to the ruin. If the second character also dies/gets captured, the game is over.

Upon entering a door in the hub world, you will be prompted to pick either Wit or Cles. It is actually possible to go back to the hub world and change to the other character by returning to a door in the first screen of the level. This will also reset all blocks in the stage to their original position, allowing you to reattempt a block puzzle if you have happened to put them in an unsolvable state. 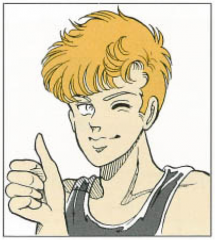 Easier to play as, thanks to his ranged weapon.

Starts out with the slowest speed (1/5 stars) and medium jump stats (2/3 stars).

楽 (Ease): can shoot rapidly by mashing the space bar 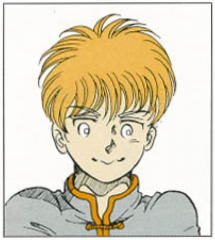 Takes more skill to control due the limited range of his kick attack.

Starts with faster speed than Wit (3/5 stars), and the lowest jumping stat (1/3 stars).

喜 (Joy): the kicks also launch a projectile, can walk off ledges and take a couple of steps in the air, but cannot push blocks

楽 (Ease): can kick rapidly by mashing the space bar 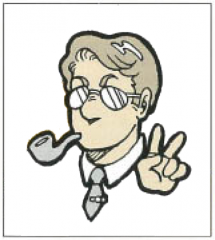 Wit and Cles’s supervisor that send them on the treasure hunt. Except for a line in the game’s introductory cutscene, he mainly features in the Japanese manual. 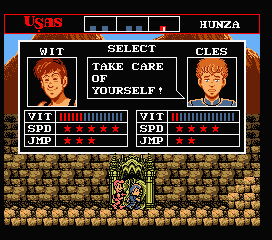 The graphics are charming and colorful, and you can tell that extra care has been put into the details. There are also a few cute animated cutscenes between the ruins that show how Wit and Cles struggle to reach their next destination by e.g. traversing rickety bridges and rafting over waterfalls. The music was composed Kinuyo Yamashita who had debuted as video game musician the previous year with her score for the original Castlevania. Although it was released the year prior to Uşas, this cartridge lacks the enhanced SCC sound chip found in a couple of Konami MSX2 games from the mid-to-late 1980s, and instead uses the MSX’s standard PSG sound chip. Like many other Konami games of the time, the music is truly excellent, and the pitch modifying effect of the mood system is a great touch.

In fact, the game has aged well in pretty much all aspects except for the controls. Despite giving the players the welcome ability to upgrade the movement and jump, the controls are undoubtedly clunky and takes some time getting used to. The level design is not unfair, but can be brutally tough in some places. In particular, the knockback from touching an enemy is huge, and can easily send you back to the previous screen. In the later stages, the mood collectibles are often placed in sinister locations where the level designers know that players are likely to get knocked back to, and in the worst case you will lose the mood that is the key to the boss door and have to backtrack to another room to find the right mood again.

Some MSX2 cartridge games, including Uşas, supported multiple languages based on the region of the MSX2 that it was played on. The Japanese and English versions are more or less identical except for some slight differences in the running speed of the game (NTSC vs. PAL). The Japanese version also has an additional ending screen that was removed in the European version. Without spoiling too much, the ending of this game is so totally unexpected that it is worth playing the game just to see how it unfolds. 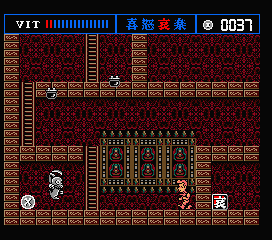 Outside of MSX2 enthusiasts, Uşas seems have fallen into obscurity in the West, which is a shame since there is a lot of great ideas and gameplay in this one. Fans of platformers should definitely look into this game, as long as you can forgive the sometimes clunky controls. Just note that if you are a collector of physical cartridges, Uşas is one of the more collectible MSX2 games and can therefore go for steep prices for a cartridge or complete copy.

The manual for the European release of the game:

A commercial windows version/emulation of the game at Project EGG (Japanese site), including scans of the Japanese manual:

The Japanese Nintendo page for the (emulated) Wii U version:

Japanese fan page that has a text version of the extended story from the Japanese manual:

A patc released for the game in 2018 that enhances a number of aspects of the game, including a custom SCC orchestration of the soundtrack: https://www.msx.org/news/software/en/vicors-usas-patch

Maps of all ruins and stages of the game: 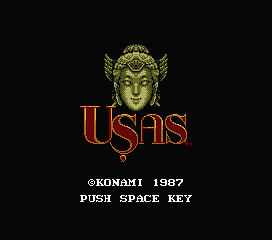 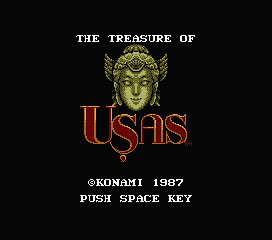 The game is called “Treasure of Uşas” on the European title screen, but interestingly nowhere else in the European packaging and manual. 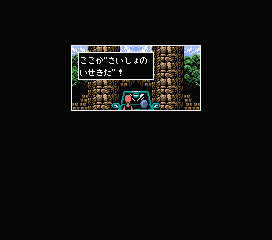 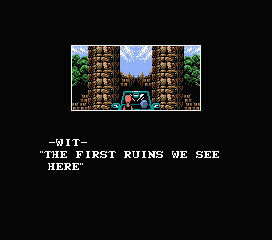 Different dialog placement in the JP and EU versions. 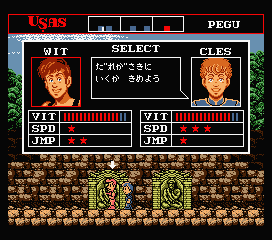 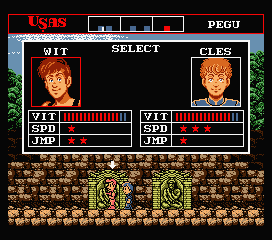 Some of the chit-chat from the first time you enter the character selection screen was removed in the European release. 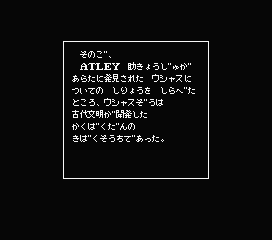 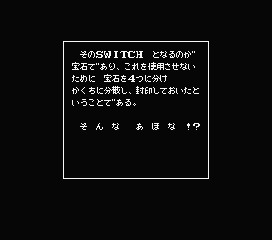 The final ending screen that was cut from the English version.