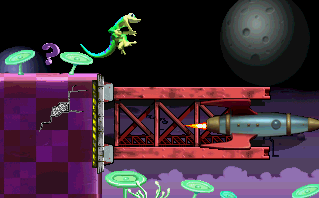 In cinema, there’s been a long-standing phenomenon: the B-movie. The classic example of a B-movie includes low production values, rock-bottom budget, and actors who audiences hadn’t heard of before (and in many cases, would never hear of again). Games have tried to capture the essence of the B-movie numerous times, to varying degrees of success (see Splatterhouse, Duke Nukem 3D, and to a greater extent, Stubbs the Zombieand Destroy All Humans). It’s rare, however, that in attempting to pay tribute to a B-movie, a game ends up practically becoming one in the process. 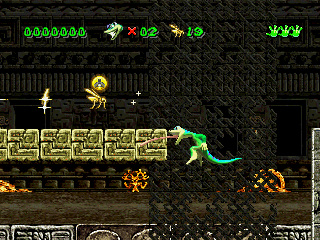 Such is most certainly the case with Gex.

Gex is a talking gecko (not to be confused with his more famous cousin, the Geico gecko) that first saw the light of day in mid-1994 as the mascot for a game company called Crystal Dynamics, during the exit of the now-infamous “animals with ‘tude!” era of videogaming. Crystal Dynamics was, near the beginning of its life, a major developer (actually, the first licensed developer) for Panasonic’s up-and-coming 3DO console system. They released their first games, Crash ‘n’ Burn and Total Eclipse (not to be confused with the Freescape-powered first-person game by Incentive Software), for the 3DO Multi-Player in 1993. Both games ended up being commercial failures, much like the rest of the 3DO (though Total Eclipse did get a sequel for the Saturn, called Solar Eclipse).

They tried again with Gex – originally a 3DO exclusive title, it eventually was brought over to the other two consoles that were quickly building steam: the PlayStation and the Saturn. 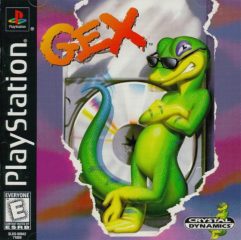 Gex, like most of us at some point, is utterly obsessed with his television. All he wants to do is sit down and watch the latest horror flick when a being known as Rez (no, not that Rez) beams him into his own TV set and forces him to explore all the different channels and try to find a way out. Each are based on different themes, like an Asian landscape for Kung Fu movies, or South American ruins for Indiana Jones-style action. Each level has a punny title with some kind of silly animation, which adds nicely to the character of the game. It’s a premise rather reminiscent of the early-’90s comedy flick, Stay Tuned – and ends up being just as entertaining (for better or for worse). 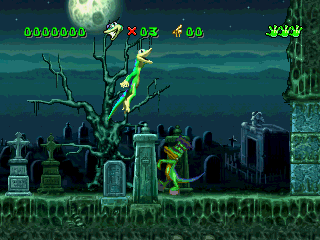 Naturally, Gex had taken about the same direction as most other animals-with-tude of his day. With the – ahem – success of Bubsy, Gex‘s developers decided to give him a series of snappy one-liners to be launched off at random during the game. And who better to launch off these tried and true tidbits than stand-up comedian Dana Gould? (Indeed, Gould’s success was one of the major selling points of the game.) The advantage of this is that, with the recognizable voice and distinct couch-potato personality, Gex doesn’t quite fade away into the background like the silent furries of other games. He also doesn’t get terribly annoying – not right off the bat, at least. Some lines do get repeated more often than one would hope, but often times it’s the shorter ones that suffer from this, so they don’t get annoying very quickly – though I must admit they did start to get old enough that I eventually turned off the voice altogether in the sci-fi levels (“Jane! Stop this crazy thing!”). Kudos to Crystal Dynamics for giving us the option, at least – but the game does feel a little empty without the near-constant movie-quotery of our lizardly protagonist. 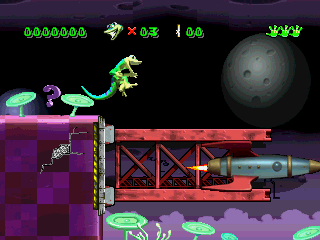 The game is actually quite well put together – it’s a 2D platformer, featuring some smooth animations, high-color graphics, and plenty of graphical variety to keep players interested. Gex is able to run through levels and basically do what a gecko must; that is, eat bugs, cling to walls, and whip things with his tail. You can also use Gex’s tail to bounce by holding down on the directional pad, which can be useful for destroying blocks as well as killing enemies Mario-style. The primary objective of each level is to find a TV remote, which is used on the world map to turn on another TV (a level). Hidden throughout some of the levels are pieces of the Planet X remote, which power up a secret world when all of them are collected. 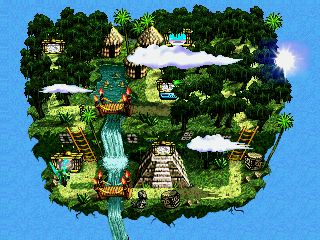 The side-scrolling gameplay is, as mentioned, pretty competent; there are plenty of neat things you can figure out, hidden secrets, and a good number of different worlds (representing the basic archetypes of B-movies: horror, cartoon, kung fu, space, and others). They all have their unique tilesets, a selection of different themed enemies, and a wide array of different one-liners for Gex to spout off. As mentioned above, these lines are actually quite amusing at times, but there are a few that get pretty old. Thankfully the game changes things up between worlds, so you won’t be hearing all of the same lines over and over again (though the generic ones, specifically ones like “It’s tail time!” will play everywhere – cue groaning audience sound). 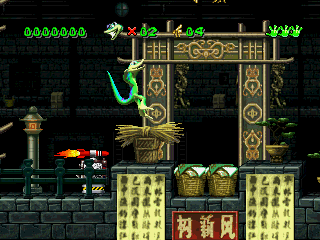 Like any good side-scroller, Gex has an assortment of powerups, each in the form of a colored orb with an insect on it. There are orbs that grant you health (either in single points, complete fills, or bonus health), the ability to spit fire, super speed, or a wind shield that kills anything Gex touches. It’s interesting to note that, when strapped for health, any of the powerups can be used as a makeshift healing item, simply by tail-whipping it instead of using your tongue to eat it. Another interesting feature of the powerups, specifically the “permanent” ones like the fireballs, is that they stack – you can hold up to three powerups, each one counting as another extra hitpoint. If Gex takes damage, the powerup is lost in lieu of a hitpoint, and the next one (if there is one) will take effect. With a possible max health of 5, this means that a fully-equipped Gex can take up to 8 hits before dying. Unfortunately, hitpoints and powerups reset at the end of each level, so you can’t go revisit a previously-completed level and stock up on health and powerups before fighting a boss. Hitpoints also do you no good against bottomless pits or water. That does prevent things from being too easy, though… but this may be more of an all-around curse, as you’ll soon see. Also, annoyingly, the game pauses for about a second each time Gex is injured, which can screw up timed jumps. 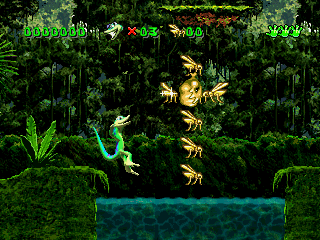 The game can tend to be a little on the difficult side at times, which is compounded by the save system – you must collect a VHS tape in specific levels to save the game – but that’s not all. You also have to actually complete the level with the tape in your inventory in order for it to take effect. Worse yet, the save feature inexplicably only seems to be present in the 3DO version, leaving PlayStation and Saturn owners to write down passwords (or else use the cheat mode, which breaks the game flow, as the levels you’ve beaten previously will not be opened up). Even worse than the need for passwords, you still need to find a VHS tape in order to receive one, and they aren’t always within easy reach (and not even in very many levels, at that – probably only one level in each world has one). Emulators with save states can get around this, these days, but that really shouldn’t be necessary. Oh, and should you die after picking up the tape, but before you reach a checkpoint (a Polaroid camera), you’ll need to pick it up again. What a pain! 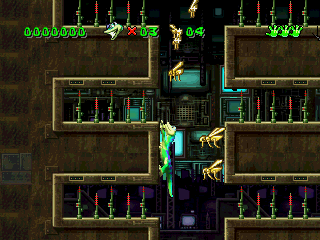 In the Japanese version, nearly all of Gex’s spoken dialogue was removed from the game, aside from his speech in the introduction movie (which was re-dubbed into Japanese), and a single line in English on the title screen. After that, he remains completely silent through the rest of the game. All three console versions were also released in Europe. 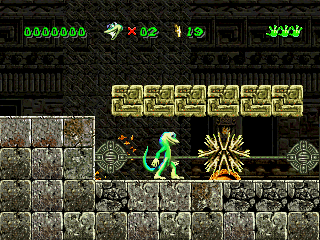 Gex, originally being a 3DO game, was probably not that hard to port to the arguably more powerful PlayStation and Saturn. The 3DO version only runs at 30 FPS, make it noticeably jerkier than most other 2D platformers, through the other versions run at the appropriate 60 FPS frame rate. Otherwise, there is no differences between the three versions, outside of the fact that only the 3DO version has save support. The game was brought to PC’s running Windows 95 a couple of years later, in what appears to be a somewhat lazy port – similar to Earthworm Jim and Pitfall: The Mayan Adventure (released around the same time), the game simply runs in a window which can’t be maximized.