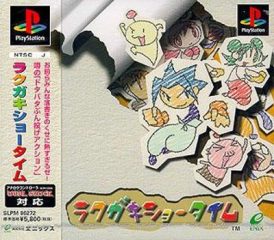 Rakugaki Showtime might be one of Treasure’s most obscure titles. Released in 1999 in Japan for the PlayStation, it’s a multiplayer arena combat game, not too dissimilar to Capcom’s Power Stone. The big draw is its unique art style – each characters are paper thin, crayon colored, animated little scribbles (“rakugaki” is the term for artistic doodles in Japanese) who hop around maniacally and do anything and everything in their power to destroy the others characters. It’s almost like a coloring book come to life – even when standing still, the scribbles continue to animate, like a coloring books come to life. Despite the rough-draft quality of all of the characters, they’re easily identifiable as works of Treasure’s inhouse artist Han, who illustrated the designs for nearly all of their previous games. 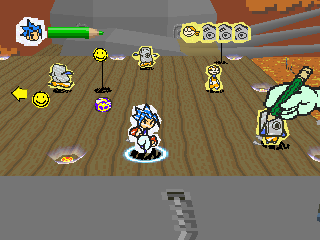 In the beginning, there are only four characters to choose from, as you work your way through the remaining dozen or so characters. Sometimes you fight them mano-a-mano – other times, you’ll face up to three of them at once. As you beat the single player mode, you’ll slowly begin unlocking the rest of the characters, except for the final boss.

Each stage consists of a square playing field, usually flat, with some occasional trees or towers off in the corner. Although the action is usually zoomed in, the camera can pull out so you can keep track of all of the action, and you can rotate the angle with the shoulder buttons. This is all pretty important, because there’s always a lot going on. If you time your actions just right, you can also catch anything thrown your way and toss it back at the attacker. It’s a bit like a super chaotic match of dodgeball, but without the boundaries that would usually separate the teams. 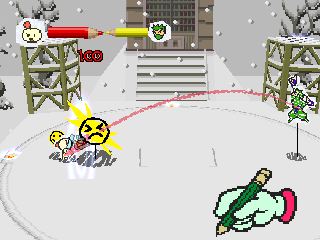 Although your characters have a handful of melee attacks, most of the action is focused on tossing objects around the screen. Whenever you pick up something, you’ll automatically toss it at the closest object, with its trajectory displayed as a red arrow. You can also alter the type of throws by holding the pad in different directions – press it towards an enemy, and you’ll execute a quick but weak lob, but hold away and you’ll toss a slow but extremely damaging attack.

You can pick up and chuck bad guys at other bad guys, damaging them all in the process, but it’s more fun to toss around the rocks and other bits of debris that litter the playing field. You’re “aided” by an omnipotent figure called the “God Hand”, which, similar to the artists’ brush from the classic Looney Tunes cartoon Duck Amuck, will appear on the screen and draw new items into existence, including missiles and miniature ICBMs, which cause mini nuclear explosions. However impressive this may be, the most important weapons are little smiley faces which bounce all around the screen and cannot be destroyed. Each time they’re thrown, they slowly get angrier and angrier, until they begin flashing. Whomever picks up the smiley face in this enraged state will execute a character specific super attack, which usually target the entire playing field. Thankfully, your characters are pretty mobile – all of them can execute a mid-air homing dash by pressing the jump button twice. Like the item tosses, the trajectories are shown with blue lines, making it easier to target where you’re going to land. The game’s pretty fast, and like many brawlers of this type, it’s sometimes hard to see what’s going on. If you want, you can slow down the speed to reduce the chaos, but braver gamers can set it to turbo mode to see everything go berserk. The music is generally grating, but the comical sound effects – like the classic “HALLELUJAH!” whenever a smiley face ball is grabbed – lends an extra bit of silliness to the action. Similarly, the character’s life bars are actually small colored pencils, which break when they’re defeated. 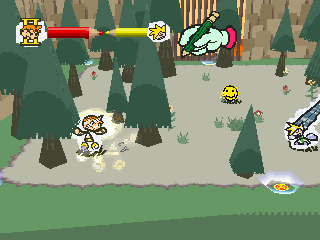 Rakugaki Showtime is a rough, frantic game that’s hard to play skillfully, but it’s not really meant for single player gaming anyway. As a party game, it’s incredibly fun, especially with a multitap and four players. It’s also a lot of fun, but it is kind of shallow.

Relatively speaking, it’s also one of Treasure’s rarest and most sought after games. Rumor has it that there was a fallout between Treasure and Enix (who had also published Mischief Makers in Japan), resulting in the publishing agreement falling through. It would make sense, considering Treasure never worked with Enix after this game, although the truth is shrouded in mystery. However, in 2008 Square-Enix released it for the Japanese PSN, perhaps indicating that any troubles had since been laid to rest.