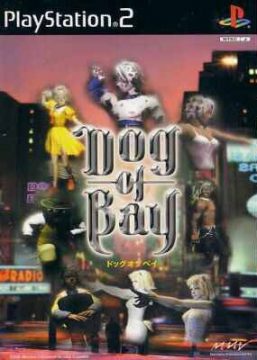 Sony’s Parappa the Rapper was the game that codified the rhythm game genre, a silly title featuring a hip-hop puppy. For a number of years, other developers tried to one up it by amping up its own weirdness, culminating in Dog of Bay, an early PlayStation 2 title from Marvelous. Dog of Bay feels like someone’s very specific fetish put in video game form. It’s a rhythm game featuring anthropomorphic dogs, though they aren’t really what people would refer to as “furries” – it’s more like regular humans wearing dog makeup and sticking on tails. As a result, it sort of feels like a canine take on the 80s Broadway musical Cats. 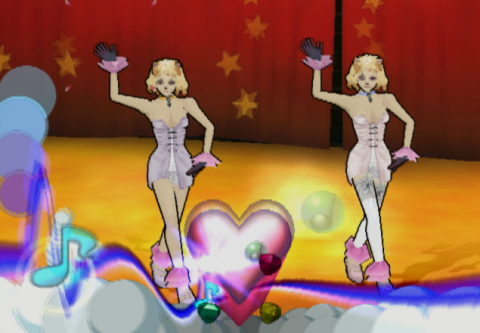 As a game, it’s pretty typical of its genre, though with significant problems. There are four jewels at the bottom of the screen, each mapped to the Up/Down and Triangle/Cross buttons on the controller. When a jewel lights up, you press the corresponding button, but you’re only given about a second to react. The interface is also remarkably cluttered, with a pulsing heart that matches the rhythm, as well as musical notes and other wavy patterns that don’t seem to do much other than distract you. And due to its location on the screen, it’s difficult to match the rhythm while watching the dance number, which almost seems to eliminate the point.

And that’s a shame, because these little productions sure are something. Despite the initial weirdness, the characters are all rendered with color cel-shading, and the motion captured dance routines look excellent, especially for an early PlayStation 2 release. There are only nine characters, but it’s an interesting bunch, including Camus, who wears Dalmatian makeup; Beth, who dresses in a slinky lounge dress; and Vincent, a 67 year old Scottish Terrier who dances with a cane. The original music is quite good and features some well known talent, including Minako Honda (the lead in Japan’s version of the play Miss Saigon) and Hironobu Kageyama (whose distinctive voice provided many of the vocal themes of the Dragon Ball Z anime). The game was produced by Ouji Hiroi, the directory of the Tengai Makyou and Sakura Taisen series, and wrote the lyrics to some of the songs. 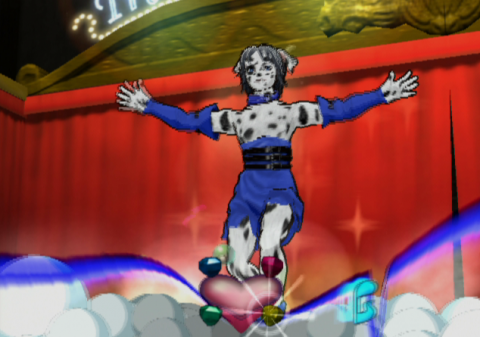 Altogether, it’s a pain to actually play, and it’s quite thin on content too. There are brief cutscenes in the story mode that illustrate some of the drama between the characters, but not enough that it feels worthwhile. Still, its offbeat premise and legitimately excellent soundtrack make it worth a glance.