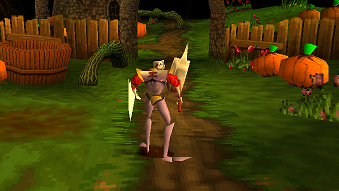 Zombies are now a staple of popular culture, but their role is usually being mindless enemies or metaphors for something else. Games where zombies are the heroes are so rare that the most well-known of them is still a cult classic made in the late Nineties: Sony’s MediEvil. 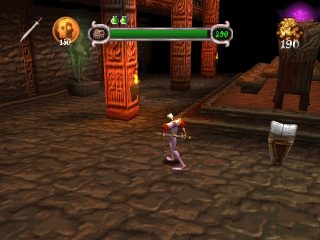 Set in the medieval fantasy kingdom of Gallowmere, MediEvil tells the story of Sir Daniel Fortesque, a knight believed by many to be a hero for his role in defeating the evil sorcerer Zarok. Only he was a liar, a braggart, and didn’t do anything besides dying a stupid death right at the beginning of the battle. 100 years later, Zarok comes back and casts a spell to turn the land’s inhabitants into his personal army of the undead, inadvertently re-animating Sir Daniel’s skeleton at the same time. So, the knight takes this second chance at (un)life in order to become the hero Gallowmere always thought him to be. 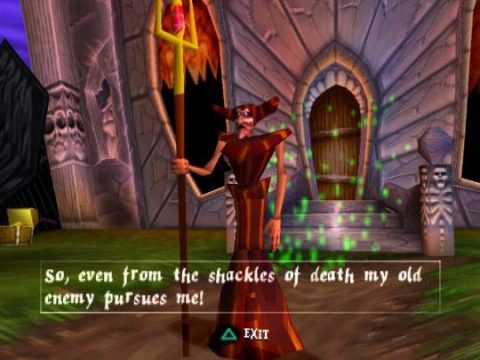 MediEvil is essentially a 3D hack ‘n slash/action-adventure game with light horror tones, and as such has sometimes been compared with Ghosts ‘n Goblins. Actually, Capcom’s series was one of the sources of inspiration in the very early phases of development, when the game was supposed to be a pure action title under the working title Dead Man Dan. Then it was reworked in order to include elements of exploration and puzzle solving, analogue to then-recent groundbreaking titles such as Super Mario 64 and Tomb Raider. Another source of inspiration was the movie The Nightmare Before Christmas, which is evident not only in the skeletal hero but also in the distorted design of environments and especially the Danny Elfman-esque soundtrack that is one of the most praised parts of the game. 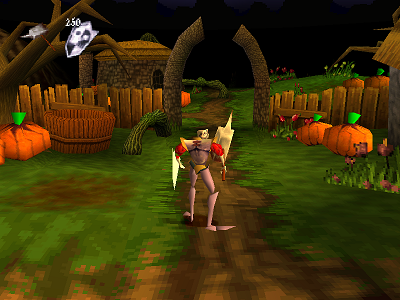 The game starts in the Fortesque crypt, with Dan coming to life and picking up his possessions before leaving the cemetery and starting to explore the land. Dan will traverse villages, haunted cornfields, ghostly pirate ships, swamps, crystal caves, sunken cities to get to Zarok’s hideout, fight against his personal army, his champion and then the evil warlock himself. Pushing the attack button with no weapons equipped will cause Dan to detach his own arm and start swinging it like a club, one of the several bits of humor that can be found throughout. Here the humor is understated and a bit dark, British indeed, but it will be ramped up in the sequels. 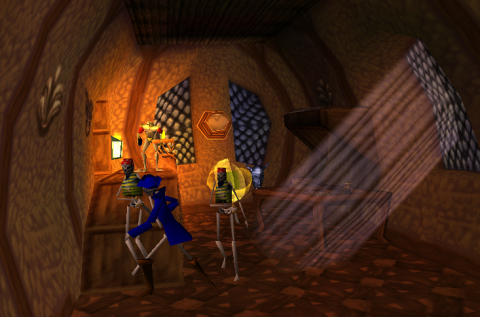 Speaking of weapons, the theme of Dan being a fraud hero is remarked with the interesting way he gains new weapons and items. Every level has a magic chalice hidden in it, but Dan can’t simply find it and pick it up; he must first defeat enough enemies to fill it with their souls to the brim (an indicator tells you when you reached 100%), only then it will become accessible. Collecting it will grant Dan access to the Hall of Heroes, a place where living statues of heroes from eras past can be found. Each one of them will give Sir Dan their own weapon or a new item in exchange for the chalice, meaning that he managed to earn their respect. Also, finding all the chalices in every stage will unlock the secret ending. 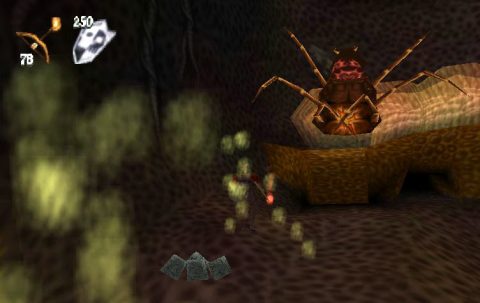 Dan has also only one chance at life, but he can pick up Life Bottles that act as additional life bars and can be replenished by using the Life Fountains that can be found all around the place. Other useful items and weapon repairs can be bought from the sarcastic talking gargoyles with the money found in bags and treasure boxes. Having life bars that can be refilled over and over seems to be a pretty big advantage, but on the other hand it is pretty common to lose energy or lives because of the camera issues. This was the first 3D production of the developing team, and it shows: the camera moves irregularly and is disorienting, especially when facing several enemies together. Hitting enemies with melee weapons is quite frustrating sometimes. MediEvil was also one of the very first games to take advantage of the PlayStation’s joypad’s analog controls, and that added to the difficulty of controlling Dan. 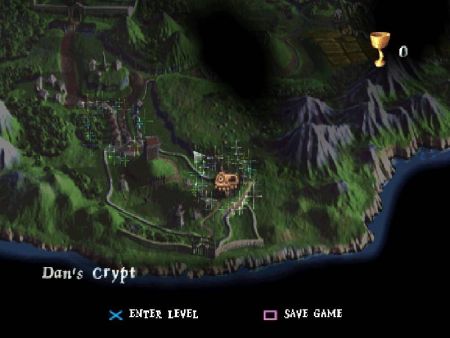 The dev team being independent and a newcomer in the world of 3D games also meant that they had more creative freedom than most, and this is evident in some of the more original levels, for example when Dan is magically shrunk in order to enter an anthill and rescue some oddly deep-voiced fairies from the ants and their queen (a quest inspired by Aliens, according to the game designer). Or when he has to solve riddles given to him by another gargoyle in a hedge maze full of crazy monks and living topiary statues. The enduring popularity of the series most likely comes from the effort the devs made in creating a bizarre dark fairytale world full of personality. Some of their ideas, however, had to be cut because of time constraints. Several pieces of promotional art showed a small worm besides Dan’s skull: its name was Morten the Earthworm and it was supposed to be a playable character in a few platforming scenes which then were removed from the final release. 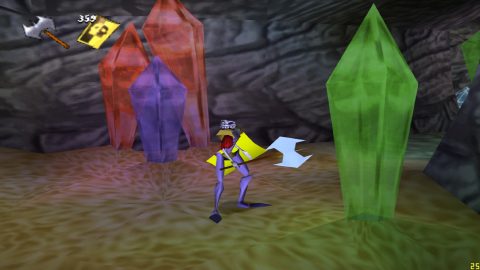 The game was re-released several times: the first time in 2003, bundled with the now-forgotten sci-fi third-person shooter C-12: Final Resistance, and another time in 2007 as a PlayStation Network downloadable title. It was also added in 2011 to Google’s Play Store as an app that can be played on smartphones and tablets, but only those produced under the parent company’s Sony Xperia brand. 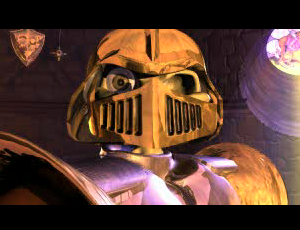 This was also the only game in the series to receive a translated and dubbed Japanese release, in 1999, under the title MediEvil: Yomigaetta Gallowmere no Yuusha. It received several small changes. The most notable are the fact that it’s generally a bit harder, the lightning weapon can be recharged instead of being lost forever, and that Sir Dan has been given an equippable helmet. It’s just a cosmetic item that doesn’t affect gameplay in any way, but still he’s seen wearing it in all cutscenes and loading screens. Maybe the Japanese thought he wasn’t cute enough? Probably, in fact having an undead as player character was too unusual and the game flopped there. So, no further attempts to bring the series to Japan were made.