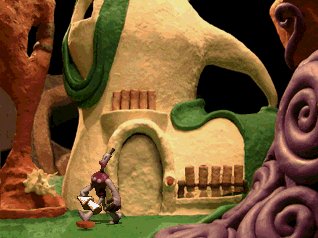 The Neverhood Chronicles is a brilliant little series, which was too good for this world. A loosely connected series of three games, it features a world made entirely out of clay. The art of claymation is rarely seen anymore in any medium, much less gaming, making its existence all the more special.

The Neverhood is the first and best, a point-and-click game originating on the PC. Skullmonkeys is the second, made exclusively for the PlayStation, and is a side-scrolling platformer that can be vaguely described as Super Mario Bros. on LSD. And finally, there’s Klaymen Gun Hockey, which is a kind of unofficial side game only released in Japan. These games (excluding Gun Hockey) were made by The Neverhood (the name of the development team) and published by Dreamworks. This silly little world is credited to Douglas TenNapel, the insane artist who created Earthworm Jim. Much of that weirdly insane humor also shines through in The Neverhood titles, filled with creative characters, goofy slapstick, and some fantastic music.

The Neverhood places you in the boots of Klaymen, a limber clay figure that looks a bit like an elongated duck. He awakens in an empty room, which would almost appear to be a prison, if it weren’t so easy to escape. It’s not immediately apparent what you should be doing, but the ultimate goal is to figure out what happened to make the landscape so barren. 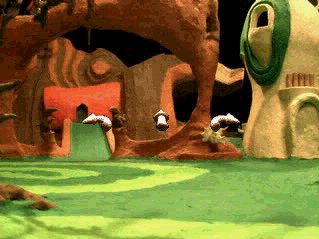 The Neverhood is fairly small, comprising of a handful of buildings connected through a hub. Although most of the experience is viewed from a third person perspective, it switches briefly to a first person camera when traveling in the overworld, lending significantly to the immersion.

And it’s a brilliant little world that’s a total joy to inhabit. Klaymen is gorgeously animated, walking forward with a triumphant swagger. His eyes maintain a perpetually blank stare, as if constantly flummoxed, or at very least confused, at the nature of his surroundings. There are dangers, but if he gets his head snipped off, he just picks it right back up, places it on his shoulders, and resumes business as usual. Per typical animation standards, there’s a whole lot of slapstick, and much of it is hilarious. Watch as he picks up a Jack-in-a-Box and excitedly turns the crank, growing frustrated when nothing pops out… until a gigantic multi-legged monster bursts out of the wall and gives chase over the land.

The clay modeling is absolutely fascinating. During the mid-90s, gaming graphics were overtaken by dull, cold, unfeeling CGI. One might say that the beautiful ruins of Myst and Riven are more attractive, but they exist only as wireframes and textures on a computer somewhere. In contrast, each building, each wall, each bump in The Neverhood was sculpted by someone. Its existence feels far more substantial, far more real, and walking through it is a true marvel. It’s also slightly unnerving, seeing how this colorful landscape seems to be hovering in the midst of a black, empty void. 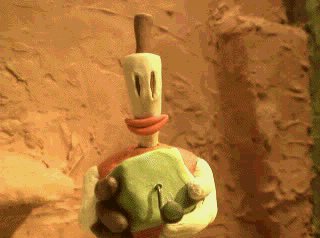 Of course, it also has some of the greatest game music known to man, largely because there’s really nothing else like it in the field. The composer, Terry S. Taylor, wanted to do something a little different than most, so what we get is awesome Dixieland-style jazz, filled with horns, banjos, and some very strange, nonsensical, harmonic vocals. It’s not only incredibly catchy, but at the same time fitting with the game’s unique look and feel. Play it for a few minutes, and just try to walk away without humming one of the impossibly jaunty, happy songs. It’s practically impossible. That being said, the upbeat music usually only plays in the third person areas – when you enter the first person sections in the hub, the music is replaced by creepy ambiance. It’s almost like leaving a party and stumbling out into the cold, dark, dangerous night, and the contrast is a little bit unnerving.

In many ways, The Neverhood has a lot in common with Myst and its ilk, from both a gameplay and storytelling standpoint. Klaymen is all alone for the most part. He never speaks, except for one sole part near the end. There are a handful of other creatures, but most are unfriendly and would rather do him harm than have a chat (although there’s only one way to die, and even then it’s clearly telegraphed). There’s not a whole lot of plot or dialogue during the course of the game, but there is an absolutely staggering amount of backstory.

One of the main goals is to find little brown tiles, which form small parts of a long cinematic narrated by Klaymen’s cousin, Willie Trombone. It all involves an evil villain named Klogg who’s naturally up to no good, as well as the king of the Neverhood, a strange creature named Hoborg. If you’re more interested in learning the story behind the world, there’s a gigantic, forty-room hallway in which the entire history is carved onto the wall. Keeping with the whole creation myth theme, many stories are somewhat silly variations of tales from the Bible, and some are quite amusing. Unfortunately, reading through them requires walking to each part the wall, panel by panel, slowing scrolling the screen up and down. Just sauntering to the end of the hall takes nearly five minutes, which is required to find a video tile, and then it takes five minutes for the return trip. Reading everything can take two hours or longer. None of it affects the game beyond background info, so you can feel free to skip it. 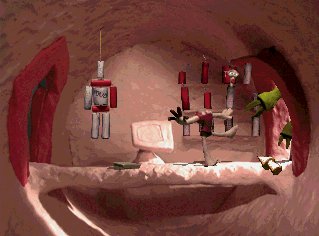 Sadly, The Neverhood falls victim to the same issue that plagues so many high concept art games – it spends so much time building up an amazing style with a fascinating world, but can’t think of much interesting to do with it. Most of the obstacles are simple logic puzzles, acting only as minor roadblocks in your quest. They’re easy enough that they probably won’t hold you up too long, but at the same time they feel remarkably insubstantial, in that there’s no real joy in solving them. Furthermore, many of the puzzles require that you go to some obscure corner of the world to find their solutions. This is why the game’s manual suggests that you have a pen and paper at the ready wherever you go; there are many occasions when you’ll see some strange hieroglyphs, wonder what they are, and leave the area, only to discover much later that you should’ve written them down when you first saw them.

So yes, The Neverhood is technically a case of style over substance, at least in the gameplay department, but the world is so weirdly goofy, the atmosphere so alternately bouncy and creepy, and the characters so likable, that it will likely stick with you for your entire gaming career.

The Neverhood found a fair bit of popularity in Japan where it was released on the PlayStation under the moniker Klaymen Klaymen. Aside from the language, there are a few notable differences between it and the original PC version, mostly due to technical issues. It runs at a lower resolution, but it still looks pretty good, and most of the animation is intact. Unfortunately there are a lot of extra load times, which even stops the game to a standstill during Klaymen’s idle motions. There is also a bit of a tutorial when you start the game. It mainly consists of little signs saying something like “Push the circle button here!”, so it’s not all that special. The voices are also in Japanese, but sadly, they’re very monotone and completely lack the soul of the English voices. The ridiculous two-minute-long belch has been cut out, as has the entire gigantic hallway, probably because they didn’t feel like translating all of that backstory. The worst of the omissions is the lack of the “fast forward” code. In the PC version, if you typed “fastforward”, the action would speed up, and you could also skip the walking segments by pressing the space bar. It’s not horribly detrimental to the gameplay, but it would have been nice to have, especially due to the extra loading times.