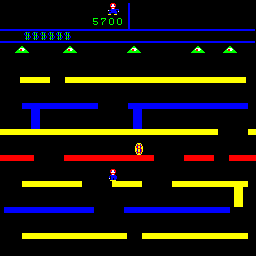 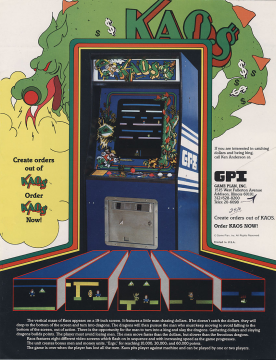 Platformers may be the poster child for what anybody thinks of when the word “retro” is mentioned in tandem with video games. A beloved genre by 8 and 16-bit game enthusiasts alike, some may think of Sonic the Hedgehog when platformers come to mind, or maybe Super Mario Bros. before that, and even Pitfall before either. Many attribute the start of the platformer as we now know it to be Donkey Kong; even if not THE first, it popularized the genre to an insane degree with its variety in level structure and hazards along with impressive graphics for the time. Just as Space Invaders spawned multiple single-screen shooters attempting to replicate its success and Pac-Man having done the same with maze games, Donkey Kong inspired the creation of countless two-dimensional platformers all about jumping and avoiding. One such game in this league of leader-followers is Kaos, an unknown little nugget of arcade history which does more than enough to set itself apart from Donkey Kong.

Unlike Donkey Kong, which is a noble quest to rescue your girlfriend from a burly antagonist, Kaos is all about money and being greedy. It was developed by a relatively unknown developer called Game Plan, an obscure company based in Illinois that is likely defunct today. Nobody knows who they are, but they must have had a fair opinion of themselves to have their name in the same size and font as the game’s title. Your player character is a chalk-white man with red hair and odd clothing which almost makes him look like a mustachioed version of Ronald McDonald. Not much is known about our protagonist, except that he is looking to collect money in the form of mobile gold coins that are the same size as him. Your playscape is consisted of several tiers of moving platforms broken up by gaps, and you have to collect moving coins that drop one-at-a-time onto various platforms. For the first few levels, if you graze up against the edges of the screen, you are electrocuted by an invisible force and lose a life, and the same goes if you fall through the gap at the very bottom set of platforms.

The stage you’re playing on ends when you grab as many coins as those indicated at the top-left of the screen. However, if you lax too much and let a coin slip through the gap at the bottom of the screen, you lose the points you would normally gain for it and it becomes a worrisome dragon-like monster. If all coins are accounted for but you still have any monsters lingering, you will have to get rid of them to conclude the level. Normally contacting these miniature dragons ends with you getting eaten, but there is a workaround; you will no doubt notice the three green triangle thingies at the top of the screen with eyes on them, bearing a great semblance to the “Eye of Providence” as seen on American dollar bills. Known as “Ergs,” jumping up to snag one of these emerald triads imbues your avatar with actual offensive capabilities. Your newfound power is denoted by a king’s crown and a sword, and you get to bulldoze any monsters while gaining a significant increase in speed. Slaying dragons is worth three times as many points as grabbing coins, so you can bring up your point total by making economic use of your Ergs. Unfortunately, you are not impervious against borders and pits, so you still have to be careful where you run, and your power runs out after approximately twenty seconds.

Your goal stays the same for each level, but the stages themselves become slightly more complex the farther in you go. While the first stage is as white bread as you can get, things immediately get dicey in the second stage with the addition of walls on most of the moving platforms. This restricts your movement and makes it feasible to become completely trapped between the wall and a fatal edge, but it also may work to your advantage if a coin bounces off the wall and towards your position. Starting at level four, you will finally be allowed to cross the edges of the screen. For better or worse, coins and monsters now have the same ability, and monsters also gain an unfair advantage where they slip through the bottom of the screen yet somehow end up at the very top. A few levels even have rows of invisible platforms, and later stages are thin with platforms near the top, making it hard to snag Ergs when you need to take care of dragon disposal. All you can do is just keep at collecting coins until you get shocked or eaten too many times.

This is Kaos in a nutshell, and once you manage to cope with the constantly shifting platforms, it’s a fun little game. However, it is unfortunately saddled with frustrating collision detection when attempting to jump up through gaps. There’s this overall unpolished feeling to the game that makes it seem like it could have featured a bit more refinement in its collision and enemy behavior. It’s kind of weird how jerkily dragons ascend through gaps and frustrating how they just suddenly jolt up halfway across the screen and gulp you up. Still, while jumping through gaps above you can be a chore, this game is more enjoyable than its screenshots may suggest. There isn’t usually too much action going on at any given time, but it’s a lot harder to chase the coins than you may think, and if the coin hits the bottom of the area floor right as you’re about to grab it? Prepare to get dragon-chomped! So Kaos is a fine if not flawed game, but it scarcely grazed the same zenith of fame as Donkey Kong. It never came out to any known consoles or computers, not even the ColecoVision which could have potentially emulated its simple visuals without flaw. It’s still worth a play if you can track it down, and it proves that Mario wasn’t the only jumping man with a mustache who starred in his own game in 1981… if only the Kaos protagonist had a known name!