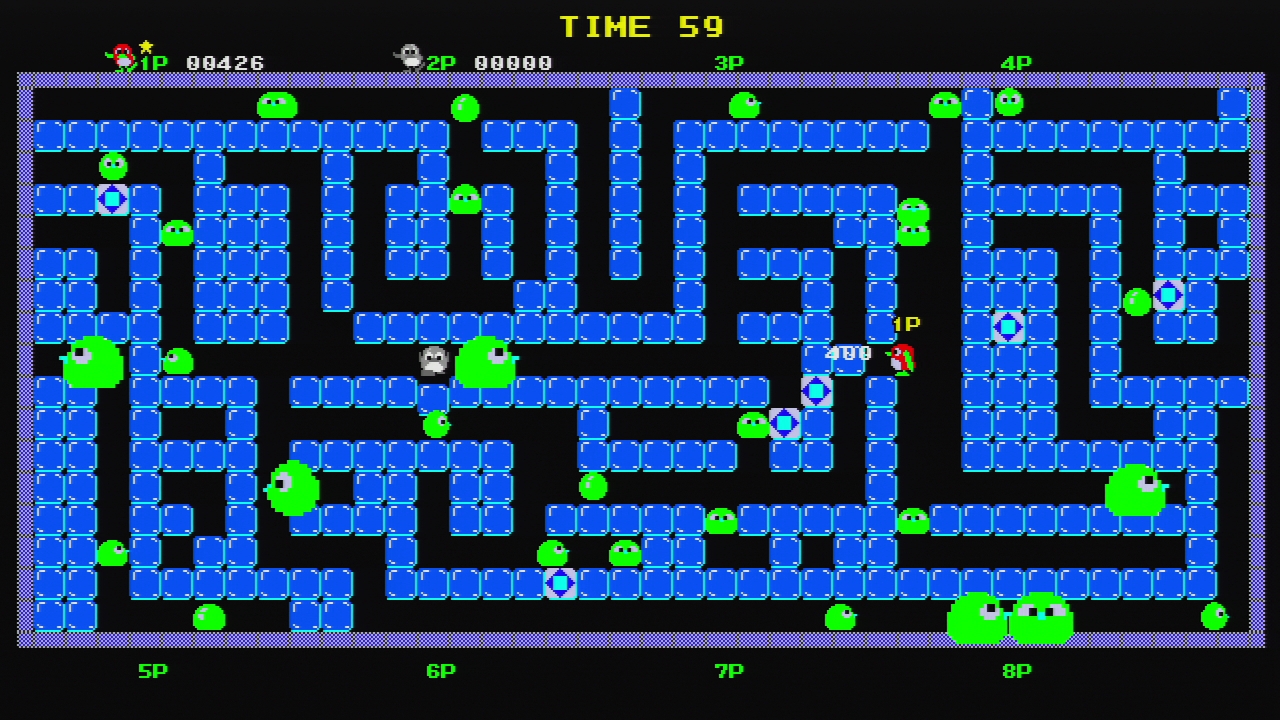 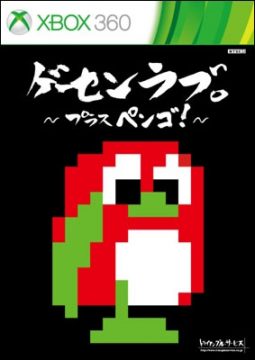 Eighteen years after the original arcade release, Pengo was revived yet again with a new arcade game named Pengo!, this time developed by Triangle Service. It has been reinvented again as a multiplayer Bomberman-style game, sort of like Pepenga Pengo, but hewing closer to the original arcade game. In fact, the visuals are basically identical to the original arcade game. The main difference is that it runs on a modern widescreen HD monitor, so the viewpoint is zoomed out. It doesn’t use any of the old music, though the soundtrack was composed in a similar style of an early 1980s arcade game…which is to say, screechy and not entirely pleasant. 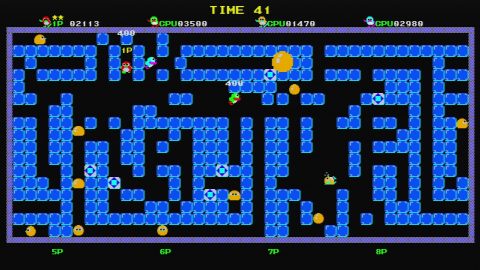 Up to eight Pengos are on the field at the same time. Each match last sixty seconds – the goal is to score as many points as possible. You get some points by destroying bricks or killing Sno-Bees, but you gain much more by taking down other Pengos. Hitting a Sno-Bee won’t kill you, but will stun you for a few seconds, leaving you suspectible to be squashed by someone else. If you are killed by an ice brick, you’re taken out of the game for a few seconds, then return as a Ghost Pengo, making you invincible. Most score values are halved when you’re a ghost, except when killing other Pengos, in which case you get double points. This form last for a short period of time before you resume your corporeal form. When the time is up, the winners and losers are determined based on your points – if you end up on the losing side, you lose a star. Lose all three stars and the game is over. There are also bonus stages, where the game briefly highlights the position of hidden eggs, and you need to remember them and collect them before time runs out.

Pengo! is sort of fun, and its rules make it seem a little less of a ripoff than Pepenga Pengo was, but it’s still fairly basic, and there’s no single player mode at all, not even a rendition of the original arcade game.

Initially released in arcades, it was ported to the Xbox 360 and bundled in the Geesen Love Plus Pengo! package, which also includes Action Skill Test, Shooting Skill Test, and Combat Zeal. Unfortunately there is no network play. It was only released in Japan, but the disc is region free. A limited edition includes a soundtrack CD with music from all included games.

Pengo was going to make his first 3D appearance as a cameo in Sonic the Fighters, with a 3D model that looked just like his 1982 sprite. For whatever reason, he never actually made it in, but if he did, it would have likely been in Bark the Polar Bear’s ice-themed stage. Image from The Cutting Room Floor.