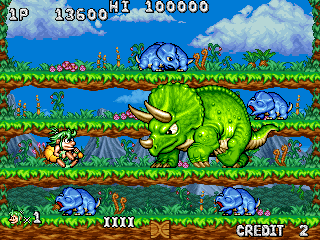 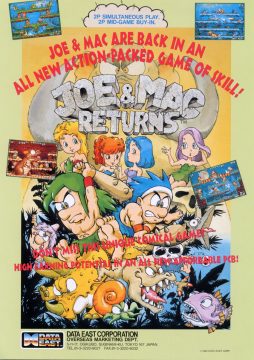 Once again Data East makes another spiritual sequel to Tumblepop, this time by mixing it with another of their properties, Joe & Mac. It sounds strange, but it actually works surprisingly well and manages to merge gameplay elements of both games in a coherent way, as opposed to the incoherent mess that was Diet Go Go. Sadly, this makes the final game for both the Tumblepop legacy and the two cavemen, but at least they went out in style. 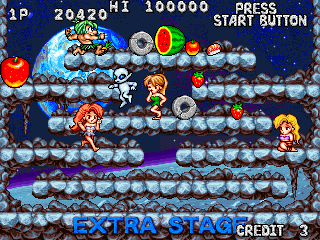 Joe & Mac Returns (the title is somewhat correct if you take it to mean “The game Joe & Mac returns”) has levels set in all the familiar places of the previous titles like the jungle, the icy caverns, the sea, the volcano, the dinosaur graveyard and so on. Every stage features huts in place of Tumblepop‘s enemy generators and includes a kidnapped cavegirl who, if freed, will shower our heroes with multiple bonuses. Since modern science hadn’t been invented yet, Joe & Mac stun enemies (all the familiar faces like neanderthals, dinosaurs, piranhas and pterosaurs, but strangely the Audrey II-esque carnivorous plants are missing entirely) with the shockwave of their clubs, and put them into a sack that works like the vacuum cleaner’s canister in the older game. At the end of every level there’s the obligatory giant boss the two troglodytes already fought multiple times like the half-frozen mammoth, the undead T. Rex skeleton, etc. The last boss fight is the same one as in Tumblepop, as if it were remade by The Flintstones. 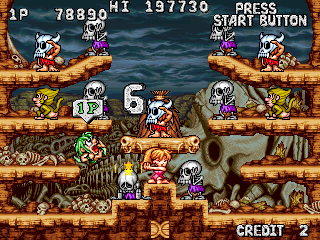 The game disregards Diet Go Go‘s approach and turns back to Tumblepop with fast-paced but not mindless gameplay, removes the slot machine, reinstates the hidden scoring bonuses and replaces the items with ones more fitting to the world of Joe & Mac, such as bigger clubs and stone wheels that turn enemies into bowling pin shapes (complete with “strike” sound effect). The graphics capture well the essence of the prehistoric locales, with several embellishments like snow in the icy stages or ashes in the volcanic stages. There’s even a bonus stage full of cavegirls that recycles Tumblepop‘s “outer space” background and has our cavemen go against robots and aliens for some reason. The music is pretty nice as well, with several tribal melodies and especially a hilarious rendition of the “Blue Danube Waltz” made with grunts and groans for the underwater stages. The garbled voice samples make a comeback as well, but this time the low quality is wholly intentional, since the cavemen hadn’t grasped normal language yet. Though, humorously, it’s easy to make out “I got the power!” in Joe/Mac’s grunts whenever he picks up bonuses. The only real downside of the game is that it’s a bit on the easy and short side, with only seven levels and still a boss rush at the end.