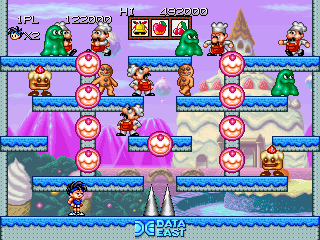 One year after the coin-op’s appearance, Data East developed an arcade-only sequel, Diet Go Go. It’s not actually a continuation of the story, but it plays largely the same, recycles several assets from the previous game and even has some of the same gimmicks, so it can be considered a “spiritual sequel” rather than a totally new property. 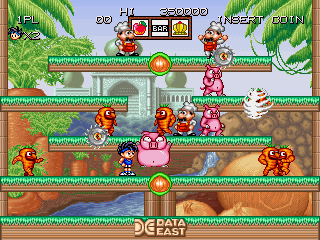 As the intro shows, the main enemy is the same mad scientist from Tumblepop (and several other Data East titles like Spinmaster), who puts in motion the almost sensible evil plan to make everyone on Earth enormously fat. Thwarting the obesity plague is almost the only connection the title has with the gameplay, since to defeat the enemies the protagonists have to act in the opposite way. The playable characters, a boy and a girl who look and dress like a couple of rejects from an 80s aerobics video, shoot the baddies with some pellets that make them first fat, and then horribly bloated, at which point they start floating like balloons and can be pushed around the single-screen levels. The objective of the game is to make the floating enemies ricochet around the levels to defeat other enemies. You can also utilize pinball bumpers, that inexplicably can be found everywhere. It sounds more complex than rolling around balls of enemies like in Tumblepop, but it’s actually the opposite. There’s also a new gimmick, in the form of a slot machine that can be activated by picking up some special coins: getting three symbols in a row makes a large number of bonus items appear, and three 7s takes you to the bonus stage. It’s nothing to write home about.

Some baddies also shoot actual pieces of food, and if the player characters get hit by those they don’t die instantly, but get fat instead. If they get hit another time with these, however, they will suddenly die, possibly because of the excess cholesterol. This can happen also by picking up the food items left behind by defeated enemies. Since not picking up food items is probably the most counter-intuitive thing ever put in a platform game, the designers had to put little skulls floating over some of them to signify their toxicity. It should be noted that everything from hot dogs to sushi and salads is dangerous, and our heroes can instantly become slim again by drinking bottles of some suspicious stuff that can be found as a special bonus. 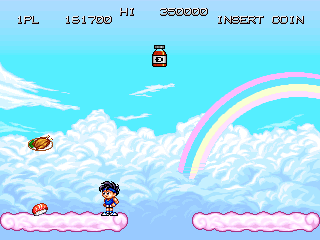 Moral of the story: don’t eat.

This warped view of diets and healthiness is, however, far from the only problem of the game. Food is supposed to be the main theme, but only a couple of levels are actually related to it, like Candy Land. Others are such random locations as an amusement park, a haunted house, a prehistoric valley, some underwater ruins and other even more surreal and bizarre locales. The game also recycles Tumblepop‘s world map to choose the beginning stage, but, since the levels are so disconnected from reality, there’s no real point to it other than not having to draw one from scratch. This goes on to impact the musical selection too: Tom Sato once again uses the same idea of having one melody rearranged for every stage (and using samples, such as “London Bridge is Falling Down” for the amusement park), but not only is the melody worse than the one in the other game, but the arrangements are mostly unrelated to the world nations they supposedly represent, resulting in such weird choices like the BGM from the prehistoric world that sounds like bagpipes! Not to speak of the distorted vocal samples, with “Let’s Diet!” sounding much like “Let’s Die!”. Creepy.

The graphics are nice and colorful enough, but enemy design is pretty lame and unimaginative. Every creature has a cute idle animation; however, it becomes hard to notice when you defeat them almost instantly. And just like in its predecessor the palette swaps are rampant. For some reason, there seems to be an anti-Disney thing going on with some of them, what with the crazy Pinocchios, a boss that looks like Snow White’s evil queen and the clowns dressed like the Sorcerer’s Apprentice from Fantasia. A few of the bosses’ designs are somewhat original, like the Dr. Mario-esque germ hiding among a cloud of other cells, or the crab-legged robotic cauldron that pulls humanoid carrots and spoonfuls of hot soup out of itself. After having defeated the last boss there is one last fight with the mad scientist, just like in the previous game, but this time it’s not a pushover and he can actually defeat you. Finally, the artists put the Data East logo in every single stage to the point of obsession, and some of the intermission images with one or both player characters getting fattened can be seen as vaguely disturbing instead of humorous if viewed today. 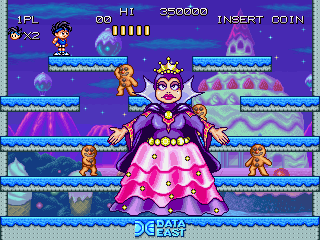 As stated above the gameplay is very repetitive: it’s just a matter of inflating enemies, going in the upper part of the screen and chucking them somewhere. The levels are so small that it’s almost impossible not to hit something else with them, and the same goes for the bosses, making for such big targets that there’s no real reason to have a strategy to fight them. There aren’t even enemy generators like in Tumblepop, so several stages can be beaten almost without realizing it.

Diet Go Go is a lazy mess of a sequel that sucks out (pardon the pun) all the fun parts from Tumblepop and adds useless innovations and a nonsensical theme. Luckily, Data East managed to recover with their third and last game in the series.