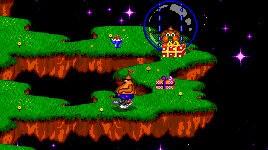 If you mention the Genesis to anybody who’s familiar with it, odds are the first thing people are going to think of is Sonic. That’s understandable, of course, but Sonic’s far, far from the only mascot that Sega’s had over the years. Take a look at poor Alex Kidd, for example. If there’s one franchise that’s endured through the love of its fans, though, it’s ToeJam & Earl. Sure, it might not have the spin-offs or the fancy ports of Sonic the Hedgehog, but in a time before the blue hedgehog, it was probably one of the most radical games you’d find on the Genesis. 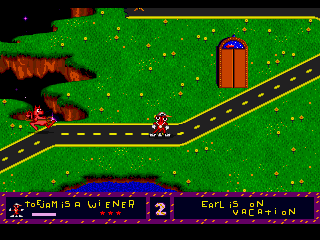 Greg Johnson, one of the designers behind the classic space sims Starflight and Star Control, and Mark Voorsanger, one of the designers behind Night Trap, among other things, went to work on 1991 designing characters and concepts for a game influenced by games like Rogue and Nethack. The two were both heavily influenced by games such as Rogue and Nethack. While their game would keep the random nature, it would also move beyond the simple text graphics and the methodical, turn-based nature of the genre. Forming a company called, simply enough, Johnson Voorsanger Productions, the two went on to create their first game all by themselves. Sega published the game, their American branch making plans to make the alien duo their official mascots. Of course, that whole Sonic thing stopped those plans, but Johnson and Voorsanger went on to create a few more games, including the children’s art program Orly’s Draw-A-Story. Unforunately, after the third T&E title, the creators disbanded, with Greg Johnson going on to form his own development studio, HumaNature Studios, who have currently not released any games.

ToeJam & Earl are two peaceful, hip-hop loving aliens from the planet Funkotron. ToeJam’s the red, three-legged red alien, while Earl’s the big orange guy in the polka-dot shorts. While cruising out one day in their spaceship, the Righteous Rapmaster Rocketship, Earl ends up taking the wheel. And then proceeds to promptly crashland on. Given that Earth is full of quicksand, gaping pits, and people who want them dead, ToeJam & Earl’s goal is to escape from Earth as soon as possible. The problem is that their rocketship ended up breaking into ten pieces on impact, and the only way off the planet is through finding them all. When you start up a game, you can either play as ToeJam, Earl, or both at once. ToeJam has an advantage in speed, although he’s lacking in health. Earl, on the other hand, has more maximum health, but he’s slower than ToeJam. 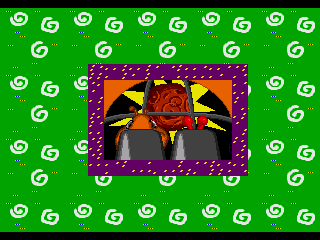 Whatever you decide, your ultimate goal is to find the ten scattered rocketship pieces scattered across the 25 “floors” of the planet. Once you’ve find all ten, that’s it, you’ve won. While the game won’t tell you where they are, it will let you know if there’s one on your current level, which helps cut down on your wandering. There can be times, however, when the game will make you play through several floors before it’ll even give you one rocket piece, which can be a pain. You’ve also got a map you can bring up whenever, which will show you where you have and haven’t been yet. Once you’re ready to leave a floor, just look for the elevator and hop inside, while enjoying one of the funky beats it plays.

While you’re collecting the rocketship pieces, however, you also have to deal withEarth’s terrain. Roads increase your speed, while quicksand will suck you into it, eventually vastly hurting your movement speed. There’s also water, which not only drains your health while you’re in it, but is more than likely full of sharks. It’s possible to swim through it to reach other areas, but you’ll probably want something to make it easier. Even more potentially dangerous than the water, however, is the gaping void that surrounds every floor above the first. While falling off the edge won’t hurt you, it will send you to the floor below you, possibly even more than one if there’s nothing below you on the next floor, as well. 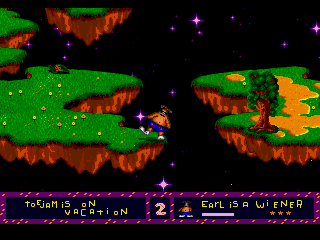 The landmasses themselves can be randomly generated each time you play, if you so choose, which means that you’ll be different with different level layouts every time you boot up the game. If you prefer, however, you can play with standardized levels, but that’s not nearly as fun. If you play with randomized maps, however, you do run a risk of ending up with levels that have things you need stuck in some out of the way place you’ll need special items to get to, which can be a huge pain if you don’t happen to have any.

Even worse are the various Earth creatures who are out for your blood. At first, you’ll mostly have to deal with minor threats like fat devils and giant hamsters. None all the enemies are immediately harmful, either, like the hula dancers who use their feminine wiles to force you to dance in place. The further you get, however, the weirder and more dangerous the enemies get. There’s evil dentists who let off maniacal laughter every time they drill you, boogey men who turn invisible just before going in to strike, and the most dangerous of all, a fat guy on a lawnmower. The problem with the game is that since you don’t get any invincibility time, a lot of enemies can juggle you into oblivion, stealing one of your precious lives. For the most part, there’s no real way to dispatch the Earthlings, so you’ll want to keep your distance from them as much as you can. 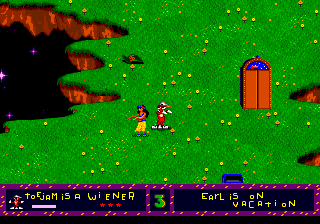 Your main defense comes in the form of presents, which work the same way that potions, scrolls, and wands would in a more traditional roguelike. Presents can do all sorts of things, like giving you sneakers that let you run at super speed, tomatoes you can toss at enemies to destroy them, a pair of wings, and all sorts of other good things. Since you can’t usually see what’s in them before using them, however, it’s just as likely you’ll get something terrible. You could get a rain cloud that follows you around and zaps you, a school book that makes you fall asleep right where you’re standing, or even a present that just kills you instantly. There’s also cash lying around that you can use for goods and services, as well as food, in both ‘good’ and ‘bad’ varieties.

There’s also the occasional good Earthling wandering around, although these guys are sadly a lot harder to find than the bad ones. They’ll usually ask for some of your cash in exchange for a useful service, which is generally worth it. Wizards will heal you, the guy in the carrot suit (He has his reasons, apparently) will identify your presents, and the fat opera lady will serve as a bodyguard for you. You can also use your cash on mailboxes to have presents delivered straight to you. That is, if it isn’t actually a horrible monster that’ll come alive and murder you. This game is not a game that wants you to succeed.

If this is all starting to sound like Nethack by way of Earthworm Jim, that’s not really a bad comparison. There’s not nearly as much combat as most roguelikes, since the tomato power-ups aren’t all that common, and the focus is more on exploration. However, you’re still wandering around a randomly generated environment, and picking up and using different items to see what they do. There’s even an experience system, where get points every time you explore one “square” of the map or open a present. Every time you hit a certain score, you rank up, lengthening your health bar and possibly earning yourself an extra life. Your rank on the status bar will increase, too, starting from “Weiner”, before moving to “Poindexter” and “Dude”, before finally hitting the prestigious rank of “Funklord”. There is also perma-death, in a sense, since there’s no way to save the game, and no continues if you run out of lives. 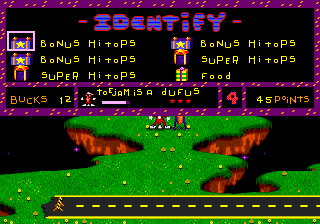 While it’s perfectly possible to play the game by yourself, the co-op mode is where the game really shines. ToeJam & Earl are free to split apart and do their own thing, and if they get too far away from each other, the game will go into a split-screen view, coming back together if they meet up again. If they walk into each other, they’ll high-five and trade some health, and if a player ends up running out of lives, their ghost can ask to borrow a life from the other player to come back into the game. There’s also a few other benefits to the co-op as well, like listening to ToeJam & Earl’s silly conversations while they’re sharing an elevator. 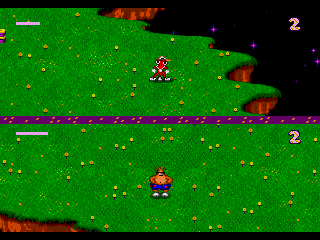 The actual game is full of this kind of zaniness throughout, and everything mentioned before is hardly covering it. The sense of humor is almost something like Earthworm Jim in nature, where the game will throw so much goofy stuff at you that the evil dentists start to look ordinary. All the characters look appropriately goofy, and even the lowliest of enemies have some nice touches of personality to them, like the way they’ll fall asleep when nobody’s around. The odd sense of humor is helped by all the digitized sound effects they’ve thrown in, like the way characters yell out “MONEY!” every time they pick up cash. If you’re into the hip hop that plays throughout the game, you can also mess around in the game’s “Jam Out” mode, which basically functions as the sound test. 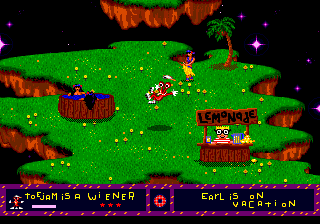 There are a few things that make the game less enjoyable, however. For one thing, the game can drag on a while, and it doesn’t help that for the most part, you’ll be looking at nothing but a lot of green, some blue, and the occasional field of quicksand. Since there’s no way to save your game, you’re never allowed to take a break, either, unless you happen to be using an emulator. Not that you’re likely to finish the game your first time through, given the difficulty curve. Given how rough the enemies get, you’re likely to end up losing your lives faster than you can actually gain them. If you manage to preserve and find all ten parts, however, you get to wander around the surface of Funkotron and talk to the inhabitants, which is a pretty cool reward. 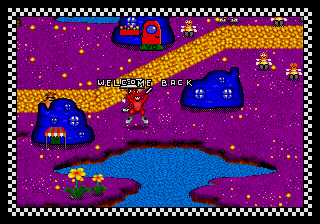 Overall, ToeJam & Earl is probably one of the most creative games on the Genesis, on a system where the only real competition is Fatal Labyrinth. It’s not only a much less cynical game, (We’re talking a game where your gold determines what kind of funeral you get) but a much more fun one as well. The more action oriented style of gameplay makes it stand out, as well as the innovative co-op mode. It could have really used a save game feature, but if you can handle the slog, it’s definitely a game to seek out on one of its several ports.

Sega remembered the game enough to make a port for the “Sega Vintage Collection”. This is mostly a straight port of the original game, which a few extras added on to it. The biggest draw would have to be the online co-op, although you’ve also got now standard features like leaderboards and achievements, along with replays and save states. The graphics don’t seem to have any sort of filter put over them, which means that the screen sides are taken up by borders while you play. The version you can get on Steam, sadly, is lacking all of those features, so it’s not much more than an emulator with a ROM.