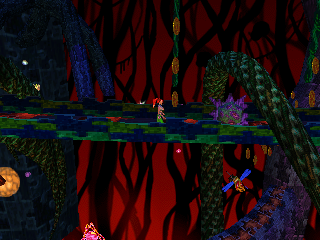 Crystal Dynamics had a more direct hand in Pandemonium 2 compared to the first. The framework for the sequel isn’t all that different. Seeing as it was only released a few months after its predecessor, much of the technical assets are carried over, and a few of the early levels mirror the backdrops previously seen. However, shortly in, the drastic change in presentation becomes quite clear. 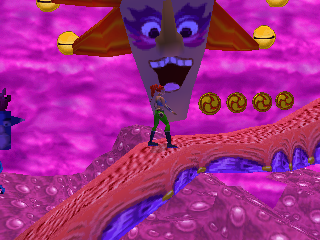 All three protagonists have been given a significant makeover. The star power lending their voices are gone, leaving only the internal staff to supply the shifted tone in each portrayal. As an apparent push to give each character a more extreme “mature” dark comic edge, their respective personalities are amplified in the worst aspects. Any and all signs of friendliness and camaraderie is tossed out the window to make their team-up more of a rivalry and spiteful disdain. Fargus’s idiocy is dialed up to annoying levels, as well as turning into a full-blown pyromaniac, eyes swirling as he hears the voices telling him to burn. Sid is now more crossed with his more moronic owner, outright hating Fargus and wanting to enact revenge upon him. And Nikki, well, aside from the obvious grab for more sex appeal in her new skin-hugging attire, piles on the sass as she’s grown very selfish in her desires. These changes distant the personalities that once had some sense of bonds to bounce off one another as they all seem to try to one-up as the most obnoxious attitude of them all. It’s almost as if they weren’t all pals – which sort of ties into the plot. These character changes don’t have an effect in the game, as aside from different models, it’s the same hopping’n’bopping nature. 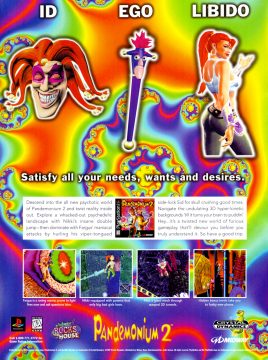 A “Comet of Infinite Possibilities” is making its next 300-year cycle past Lyr, and everyone’s scrambling to make their wish to it. Not only are our trio butting heads trying to get there first, they have to outpace the evil Goon Queen Zorrscha (whom looks rather sexy for a leader of dumb ugly blue monsters). Merely reaching the comet isn’t enough, as all the magical power lies deep within the core. In fact, 3/4ths of the game takes place on or inside the comet, which surprisingly houses lagoons, temples, and mechanical steel-laden complexes within. This acts as another far-flung departure to the style of the first game, as majority of the stages have a trippy, neon aesthetic that only intensifies the psychedelic aura as it progresses. It does push the colored lighting and vivid look of the game, but foregoes much of the fantasy elements for most of the playthrough. 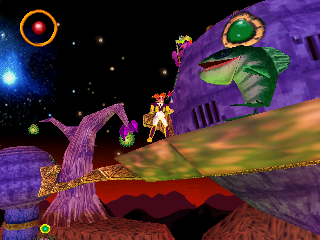 The gameplay did recieve some minor additions. Much of the new platformer content deals with Fargus and Nikki using their hands. Ropes and suspended handrails are added to the layouts, as well as grasping ledges and holding onto flying objects. This gives some more verticality to many stages, but with the camera panning, it can add to frustration traversing or floating upwards. Fargus also got a helpful attack boost, being able to fling Sid like a boomerang. Spells are mostly alters and also affect the jester differently. The normal fireball is back, but the Shrink and Freeze Rays were removed for 2 new powers. One is another fire spell that’s an aimable blast for Nikki and a deadly torch that lights Fargus on fire, and the other is a lightning bolt / inflatable Sid pump. Nikki does benefit more from the spells, but at least Fargus has more offensive versatility in his normal state, despite still lacking a double jump. All shapeshifting transformations are missing, instead replaced with vehicular segments. It now takes 500 coins to earn an extra life, and only a modified form of the Speed Greed bonus game is available at the end of each level. In one final addition, there’s different endings depending on which character defeats Zorrscha. Nikki gets her power and Fargus makes everything look like him, much to Sid’s dismay. In all honesty, this is mostly a expansion pack-level sequel. It brings most of the same issues plaguing the original and coats it all in a psychedelic paint.

Again with the first game, a PC port was created with the same perks and drawbacks. A Saturn release was planned but ultimately scrapped, possibly in no small part to the more intensive color effects and moreover the dwindling demand in the west for the platform. Other than digital PSN versions, Pandemonium 2 saw little ports or releases. This sexy form of Nikki did have a very brief cameo at the end of Gex: Enter the Gecko, sitting on his bed waiting for him in the ending FMV. Quite a disturbing insinuation there, Crystal Dynamics. On the foreign side, the sequel was released in Japan under the title Miracle Jumpers. Unlike Magical Hoppers, there’s zero difference to the game aside from redubbing the dialogue.