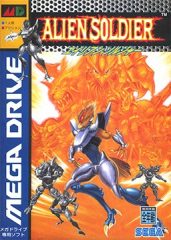 Treasure’s Mega Drive blast-a-thon Alien Soldier is nearly impenetrable, unforgiving, exhausting and infuriating. That said, it is also an almost unequivocal technical masterpiece, and a veritable rite of passage for the serious action gamer. This game pushes the Mega Drive, and the player, to the absolute limits of their powers with a confident, almost arrogant effortlessness. Alien Soldier is game design at its finest. Setting the “68000 Heart On Fire” indeed. The designers of Gunstar Heroes decided to take the solid foundation of play mechanics built by that title, expand the functionality, up the ante, and create a great big Boss Rush orgy. There are small stages full of cannon fodder, but these are mostly reserved for attempting to refill one’s weaponry & life energy, and taking a small breather between the bosses. The amount of practice needed to build technique solid enough to take down all of the 28 bosses and mini bosses throughout the 24 stages is daunting to say the least.

In Alien Soldier, you control a gigantic bird-like human named Epsilon-Eagle, as you fight the forces of the evil Xi-Tiger. It uses an expanded version of the Gunstar Heroes control scheme for maximum xenomorph destruction; allowing the player to select between the fixed & free shot options – in the middle of gameplay this time – as well as four separate weapons with limited ammunition. There are six weapons in total, which are selected at the beginning of each stage and can be selected by hitting A during the game. It also introduces a neat teleport ability which allows the player to dash to either side of the battlefield with a simple Down + L or R + C, and limited hovering for attacking in the center part of the screen. The aforementioned Zero Teleport also allows for a devastating attack when used with full life energy. The player becomes an infernal Phoenix and annihilates everything in their path, using a small amount of life energy in the process. The teleport is the key to progression. You can also switch gravity and walk on the ceiling, which is the key to a number of boss fights.

There is also an interesting Counter Force maneuver that allows the player to change incoming projectiles into life energy with a simple double-tap of the B button (attack). This is especially handy for charging up the Phoenix teleport move as it yields life recharging items. The drawback of the expanded control is that it all takes some getting used to, and can be a bit overwhelming when facing the relentless attack that Alien Soldier continually pummels you with. The limited ammunition can also be a bit of a bear to manage, requiring the player to choose their shots carefully, and picking up an incorrect weapon can spell doom. There are two difficulty levels – Supereasy and Superhard, with the former giving you option to slow down the action – although the game is still brutal regardless of which you choose. Thankfully, the levels are broken up into small chunks, with a password that will restart you right before almost every boss fight. Ultimately, persistence pays off, and everything becomes second nature, turning the player into a merciless killing machine. Satisfying indeed.

Graphically, if you’ve played Gunstar Heroes, or any other Treasure game for that matter, you know what to expect. Over-the-top special effects, parallax, large, multi-jointed sprites, ultra-fast gameplay with no slowdown…the good stuff. The best things about the main character visually are that he is nicely animated and about twice the size of the Gunstars; or as large as a character from a one-on-one fighting game, even though it difficult to dodge smaller bullets. The various bosses are all well-rendered, some are quite large, and their art design ranges from interesting to downright weird, including the return of the weird floating eyes/nose/teeth boss that showed up in Black’s palace in Gunstar Heroes. Per usual Treasure standard, almost all of them are remarkably cool. One of the best is when you’re flying up a tower, holding on to the back of a gigantic insect. Almost without warning, it gets tangled in a web, where you then need to fight the monstrous mechanical spider than spun it. Even an updated Seven Force makes an incredibly intense appearance. Schizophrenic art aside, one thing is certain; the Genesis is running at its absolute shining apex here and we are thankfully along for the ride.

The sound is also quite good, with excellent explosions, some nice voices, and appropriate incidental & weapon effects. The music is the Treasure standard, with their trademark unique instrumentation, and inspirational composition to get you fired-up to kick some multi-jointed tail. The main musical difference between Alien Soldier and its spiritual predecessor Gunstar Heroes is that this time, the tone is much more in the realm of dark and evil. It’s all out war. The music is as intense as the game and enhances the experience considerably. 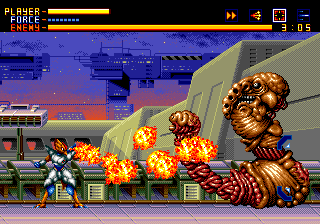 So if you decide to pick up a copy of this game, what’s the damage? Well, for the original release expect to shell out between $150-$200 for a Japanese copy of Alien Soldier. Yet again, we in the US got shafted. The game was also originally released in Europe, and both versions are included in the PS2 Sega Ages Vol. 25: Gunstar Heroes Treasure Box with Gunstar Heroes & Dynamite Headdy. Like the other games on the collection, the sound is a bit off, but otherwise it’s emulated perfectly. There’s some cool artwork included, as well as a great Superplay video that gives some insight into how to hone your skills. (Hint: Almost all of it requires using the Phoenix dash at the precise right time to take out bosses in a single shot.)

The European version goes for markedly less than the Japanese release, mostly due to the fact that it was optimized for the 50 Hz PAL display standard. This was great for European gamers accustomed to horribly poor PAL conversions, but became a snag for US gamers in search of the Alien Soldier experience. The game will play on a 60 Hz NTSC system with a Game Genie or Action Replay (there is a territory lockout as with Yu Yu Hakusho), but the game will run at 70 Hz, resulting in slightly sped up gameplay and some graphical glitches. It is entirely playable, but a sped-up version of an already difficult game can be quite frustrating. In the Japanese version, the intro scrolling text consisted of a huge amount of hilariously bad Engrish, which has been mostly cleaned up for the European release. The PS2 version is a better choice for those unwilling, or unable, to drop the cash for the Japanese original. However, Sega was wise enough to make this an international release for the Virtual Console on the Wii, making this the cheapest and most viable option. The game is also available as part of the Sega Genesis Classic Collection Gold for PC (and as an individual download per digital distribution).

Although Light Crusader was released a few months later and was technically the last Mega Drive game released by Treasure, Alien Soldier was most definitely meant to be their swan song, and it is a sweet one at that. It’s a killer display of the company’s collective talent and would serve as a harbinger of what was to come in the next generation and beyond.