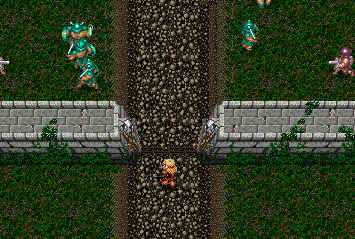 People love to lament about how unoriginal the gaming landscape is, and how everything is a clone of a clone. Even though these same people love to dream about how much better games were in the old days, the fact is, there was plenty of crappy, derivative junk, created mostly to wow arcade-goers with some impressive graphics, all while sucking quarters out of them. 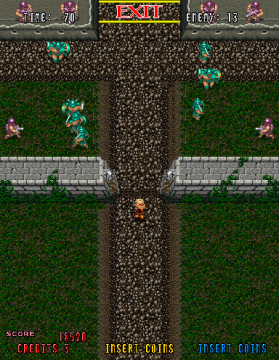 Sega’s Gain Ground stood in opposition to this. There’s some ridiculous plot about humanity finally reaching a state of world peace, but they begin to worry that they may lose their fighting instinct. To quell this instinctive urge, they create a super computer that simulates warfare from throughout Earth’s history. Naturally, the computer goes crazy and starts killing things for real, so it’s up to you to put a stop to this digital insurgence.

You play as an army of commandos, Vikings, valkyries, samurai, Native Americans, knights and robots, as you travel through different time periods, ranging from prehistory to the medieval times to the distant future, killing anything that tries to kill you. Tossing all of the anachronisms into a huge pot and stirring is an intriguing idea – sort of a takeoff on Alpha Denshi’s Time Soldiers – and it’s completely different to anything on the market, then or now, even though it’s hard to see at first. 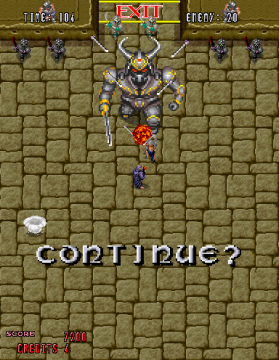 Gain Ground may look like a standard overhead action game, but it’s not a shooter – the pacing is completely different to a standard overhead Mercs-style game. Some people call it a strategy title, which isn’t accurate either; it’s absolutely nothing like Fire Emblem or Command and Conquer-style games. Sega themselves call Gain Ground an “algorithm action“ game, and while that’s easy to write off as some kind of crazy Engrish, it almost kind of fits.

In Gain Ground you are given a single screen, filled with enemies and obstacles. The arcade game runs on Sega’s System 24 board, which results in some incredibly high-resolution graphics and a huge playing field. The characters are tiny, but it gives a lot of room to move around. In the beginning, there are three selectable characters, each with different abilities. In order to complete each of the stages, you either have to kill all of the enemies, or guide your heroes to the huge block that says EXIT. 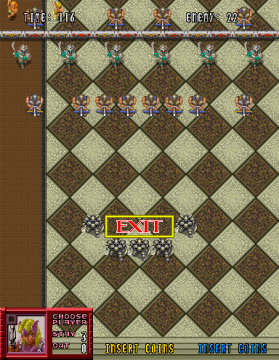 When you first play Gain Ground, you may feel that something is horribly amiss. None of the characters move at a quick pace. Instead, they just kind of waddle around, strolling through a battlefield as carnage unfolds around them. Their weapons are slow, awkward, and often hard to use properly. There are no screen clearing bombs. If you play this like any other run-and-gun shooter, you’ll get demolished pretty quickly.

But therein lies the puzzle aspect of Gain Ground, as it becomes imperative to study enemy patterns and figure out the best way to beat them. Some enemies will only charge at you when you come close to them – in which case, lure them out, run back, and repeat. Most enemies shoot directly at you, so as long as you’re fast enough, you can keep running without getting hit. Most enemies have behaviors that are less scripted, but can be analyzed and exploited This is where the “algorithm“ part fits in.

Most importantly, you need to look at your characters and figure out the best, most efficient way to utilize their unique roles. Each of the 20 characters has a variety of strengths and weaknesses – some are slow but powerful, while others are needed to hit enemies at different heights.

You begin the game with just three characters at your disposal, but pick up more as you go along. On the battlefield you’ll often come across little icons of disabled soldiers. If you pick them up and reach the exit they’ll become playable in the next round. 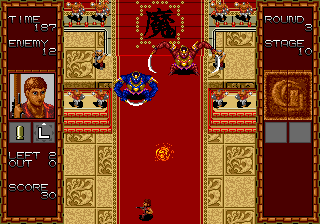 On a similar note, there are no real “lives“ in Gain Ground. If your character dies, they show up as disabled on the battlefield. If the dead character can be picked up and escorted to the next stage, they’ll be resurrected, good as new. However, if your next character dies, or you finish the level without them, then they’ll be lost for good. In other words, building up your ranks and keeping them alive is one of the biggest challenges in Gain Ground. 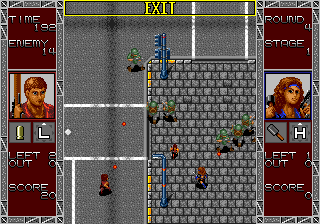 This is primarily because the game is brutally difficult and unforgiving. It’s all too common that you’ll start off a level with a new character, get them killed before you can figure out what their strengths are, and never see them again. Additionally, there are way too many situations where you can screw yourself over if you don’t have the right character. What if there are enemies on the rooftops and you don’t have any characters that can hit them? Well, ha ha, tough luck. It’s not always impossible, and it forces you to improvise if you’re ill-equipped, but more often than not, it just leads to some incredibly cheap deaths. 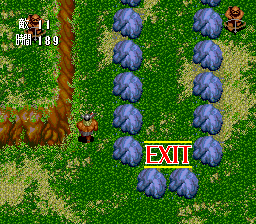 Sometimes the game just gets too overwhelming for its own good. The most obnoxious group of enemies are wizards that transport to various places around the screen, toss out some fireballs directly at your character, and then disappear to some other location. None of your characters are fast enough, nor are your weapons versatile enough, to deal with them properly, especially when they throw some wizards in a level with no maneuvering room. There are at least a few levels that seem completely counter intuitive to the game’s slow-and-steady mechanics. Oh, and you’ve got a time limit to beat each level, so you’d better hurry up. 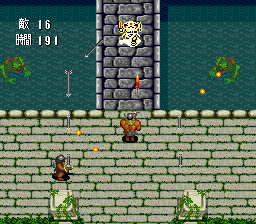 There’s also another quirk to keep in mind. Most of your characters are either left or right handed. This means that they’ll shoot off center each time they fire. This may add realism, and occasionally lends to the strategy, but when you’re getting chased in circles by some bad guy, the last thing you want to worry about is adjusting your aim. 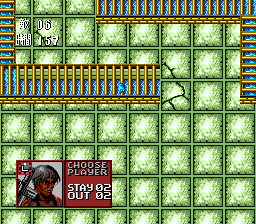 The developers have stated that their original inspiration was Gauntlet. Visually, it’s easy to see the comparison. Plus, both games are about sending multiple players to fight against hordes of bad guys, finding order amongst chaos, and using a character’s skills as efficiently as possible. Beyond those aspects, however, Gain Ground is a completely different animal, adding a bit of brainwork to a genre mostly known for pure brawn. Sure, there are more than a few irritating aspects in it, and it’s almost shameful that there was never a true sequel to fix any of them up. But it certainly gets points for traveling on the path less taken, and most dedicated gamers should be forgiving enough to put up with some issues in order to experience something genuinely unique. 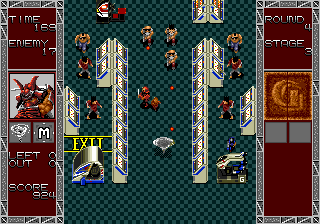 There were several ports of Gain Ground. The Genesis version was ported by Sims and published in America by Renovation. Since there was no way to accurately scale the playing fields from the arcade version, this port shrinks the battlefield considerably. Even though it feels cramped compared to the arcade version, it actually helps the pace of the game quite a bit, especially when you need to move multiple characters to the exit. 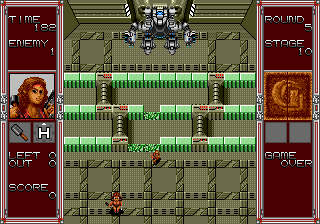 There are also 10 completely new levels in the Genesis version – the added Modern Epoch takes place in the streets of the city, with one stage being inside of an arcade. There is also a “Hard Mode“ which starts you off with all twenty characters. The Genesis version is also included on the Sega Genesis Collection for the PS2 and PSP, and Sonic’s Ultimate Genesis Collection for the PS3 and Xbox 360. 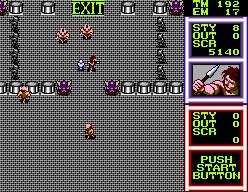 Sega also released a port for the Master System, again ported by Sims, which obviously has some vastly scaled back graphics and some choppy animations. However, many of the levels are changed, and some of the character abilities have been changed around. There are only ten character types, with the first player controlling all male characters, and the second controlling all female, though functionally, their counterparts are identical. There are also ten brand new levels that take place inside of the Gain Ground system. Despite the technical downgrades, it’s worth playing just to see something new. 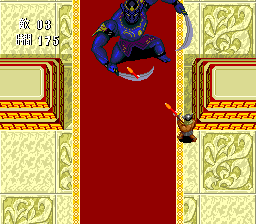 NEC Avenue also ported Gain Ground to the PC Engine Super CD under the title Gain Ground SX. (The “SX” stands for “Scroll Extra”.) Other than the excellent redbook audio soundtrack courtesy of T’s Music, there’s really nothing that takes advantage of the CD format. In spite of this, it’s probably one of the best ports of Gain Ground. In order to faithfully recreate the levels, the action has been zoomed in, and the screen now scrolls up and down. All of the characters move and fire slightly faster, plus many of the enemies are a bit easier. 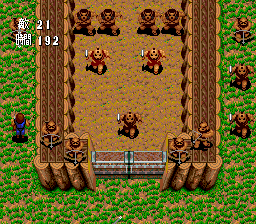 While one can argue that it takes a lot of the challenge out of the game, it’s also much more playable – and fun – than any other version. It also has some nice sound effects, which normally isn’t very important, but they’re very noticeably considering all of the other versions sound pretty lame. Unfortunately, most of the home ports (except for the PS2 version) are missing the goofy “end of level“ messages, like “NOW YOU LOOK OUT“, “YOU ARE BRAVE ONE”, and “NEXT STAGE IS NOT EASY“. 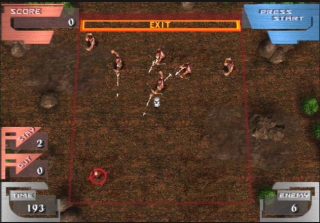 Gain Ground was also resurrected in 2004 as part of the Sega Ages series for the Japanese PlayStation 2. The gameplay is the same, but it uses all new polygonal graphics. While some of the screenshots seem rather ugly, the game looks decent in motion. The only real advantage to the 3D graphics is that you can choose between three viewpoints – overhead, slightly skewed, and a low angle viewpoint, the last of which looks cool but is actually rather useless. 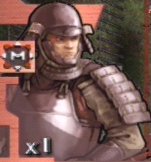 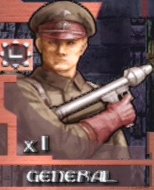 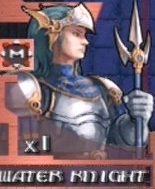 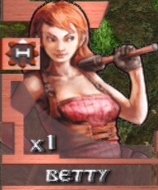 Each character has brand new artwork, most of which is pretty cool, and for the first time it displays their name in English (they were relegated to instruction manuals before). The characters themselves look slightly super deformed, and the goofy egg-shaped renditions of the captured units are pretty amusing. 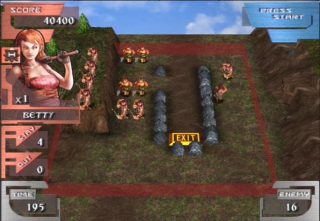 Like the other home ports, the levels have been shrunken so everything fits on one screen, and the three-player mode has been reduced to two. But otherwise this is pretty accurate to the arcade original. There’s even an option to disable an annoying bug in stage 4-8, which otherwise made it very difficult to clear. It is, however, lacking the extra stages from the Genesis version and the rebalanced difficulty from the PC Engine CD version. 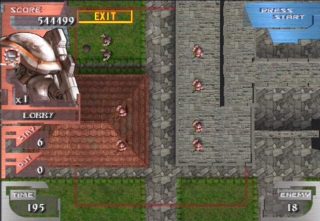 There’s also an “Extra Mode“ which features some slightly different graphics tile sets and altered character abilities. Unfortunately, accessing this requires beating the game on the default difficulty settings (normal level, 120 seconds time limit). Gain Ground is 40 stages long, and gives you unlimited continues right up until the last stage. But if you haven’t saved the right characters, the final boss is incredibly difficult, so unlocking this mode is only for the most hardcore players. 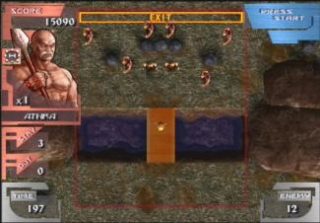 On the plus side, it opens up what is probably this releases’ greatest asset – the music. The entire soundtrack has been provided courtesy of awesome music artist Saitama Saisyu Heiki (also known as S.S.H.), who does some damn amazing stuff with his synth guitars. All of the arcade music has been rearranged in this style, but the Extra Mode features a whole ton of brand new tracks, which are all fantastic in their own right and totally makes this version worthwhile. 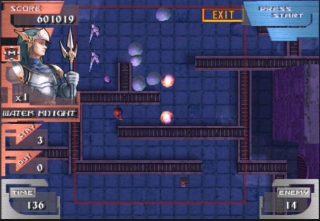 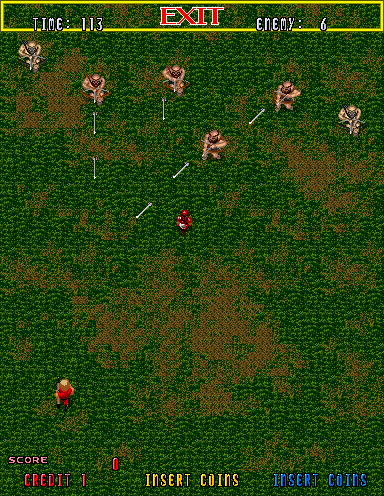 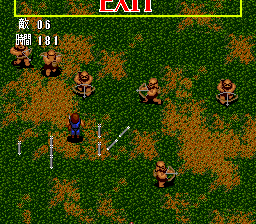 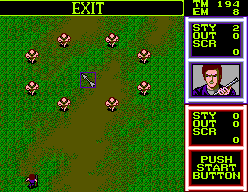