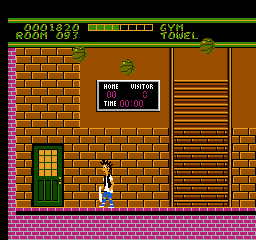 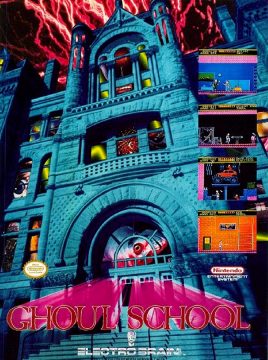 There are several creepy games on the NES that could qualify as a bona fide Halloween game, filled with as many creepy elements as Nintendo’s censors would allow. Castlevania, Ghosts ‘n Goblins, Maniac Mansion, Uninvited, and Monster Party represent a good sample of horror-style games perfect for the month of October, or really any time. Sweet Home is perhaps the ultimate scary game for the Famicom (in addition to being one of the greatest movie licensed games), though Western audiences would never see it due to its disturbing imagery and gore. If it counts as any consolation, Japan never saw the release of Ghoul School, a domestic North American release which can best be described as an action-adventure where Halloween comes to high school. It’s notable for being an early Metroidvania, released several years after Metroid (itself a pretty creepy game) but before the genre became explosively popular, and it was developed by Imagineering, the in-house development studio of Absolute Entertainment formed by Garry Kitchen (developer of the GameMaker program) and David Crane (designer of the first great platformer, Pitfall!). Pretty impressive pedigree and premise, huh? It’s a shame the game doesn’t quite deliver on what it promises, but at least it feels like they tried.

Ghoul School sees punk rebel Spike O’Hara find a large glowing skull in the graveyard and takes it to Dr. Femur, the science professor at “Cool School.” This already sounds like the premise of a cheesy eighties horror-comedy, which was most likely the point. The skull turns out to be a porthole for a realm of dead souls, and Cool School is appropriately transformed into Ghoul School after all sorts of morbid monsters invade it. Furthermore, head cheerleader Samantha Pom-Pom has been captured by the baddies for unspecified purposes, so Spike somehow gets the gumption to try and beat them and rescue Samantha. Spike doesn’t seem like the sort of guy who’d risk his life for another, much less save his own school, but the story isn’t really the focus. No, this game’s all about surviving and eliminating various monsters, most of which are red shambling humanoids with a giant eyeball where their face should be. The ocular cannon fodder is further backed up by goblins who throw their heads and arms like boomerangs, tough Frankenstein-style monsters, haunted basketballs, crawling brains, and adorable monkeys who keep pelting you with wrenches.

The enemy variety is pretty neat and the creatures themselves are well-designed, though the same cannot be said for the map. Most schools aren’t meant to be masterworks of gothic architecture like Castlevania, but the Ghoul School is a bit of a mess to navigate. You’ll be spending much of your time marching down hallways, most of which share the same ugly orange wallpaint. You will occasionally come to hallways of different colors containing important rooms, but most of the rooms you enter will be generic grey classrooms that are also indistinguishable from each other. Metroid may have had an entirely black background, but it still managed to make most areas feel relatively unique and had many areas requiring vertical movement. Here, you’re just walking left and right through a bunch of orange and grey, and a large chunk of that time will be spent whacking eye-beasts who have too much health.

You start out with a horribly-ranged bat that takes four whacks to kill the eyeballs with, and a wet towel is somehow an improvement over your bat. You’ll eventually get other weapons like a gun that has good range but pathetic damage, embalming fluid for hitting really small enemies (Spike is unable to crouch normally), and surprisingly damaging sandwiches. You’ll also get spring shoes for extra jump power and suction shoes for ceiling crawling, but you are a noticeably taller target while wearing either. The only other items you find are apples which restore either a bit or a lot of life, which are necessary to conserve until absolutely needed considering you only get five lives to complete the game. Without any continues, password systems, or saves, Ghoul School demands it be beaten within its viciously strict rules, which most people would likely not be willing to accomplish. In fact, the ending is quite the insult, where Spike holds Samantha’s hand after rescuing her, only for her to shrug his hand off and step away. You have to suffer through an almost impossible maze of bland corridors and buff eyeballs only to get that as your reward? There were a lot of NES games that didn’t have much of an ending, but at least most of them didn’t insult you either.

Ghoul School feels like it could have been a legitimately fine game but ended up as a lot of blown potential. It does get points for occasionally being legitimately creepy, like the Medusa head guarding an anonymous pile of bones just to the left of your starting position, and a nightmarish version of Westminster Quarters plays in the principal’s office (to note, your principal has inexplicably been morphed into the Grim Reaper). There’s also a corpse in the gym that appears to be half-bloody in a moment of censor-dodging, and you die instantly if you run over it. Sadly, these interesting moments are too few and far in between a bunch of boring travel through a sloppily designed map that almost makes the first Metroid seem like walking a straight line. It takes too long to kill enemies and some of them can deal vicious damage to you in return. The odds seem greatly stacked against Spike, which would have made for an interesting survival horror romp, but that’s not what this game tried and failed to do. Ghoul School may get an “A” for effort, but it gets about a “D” in practice, though maybe a “C-” if the teacher’s feeling generous around the end of the semester.