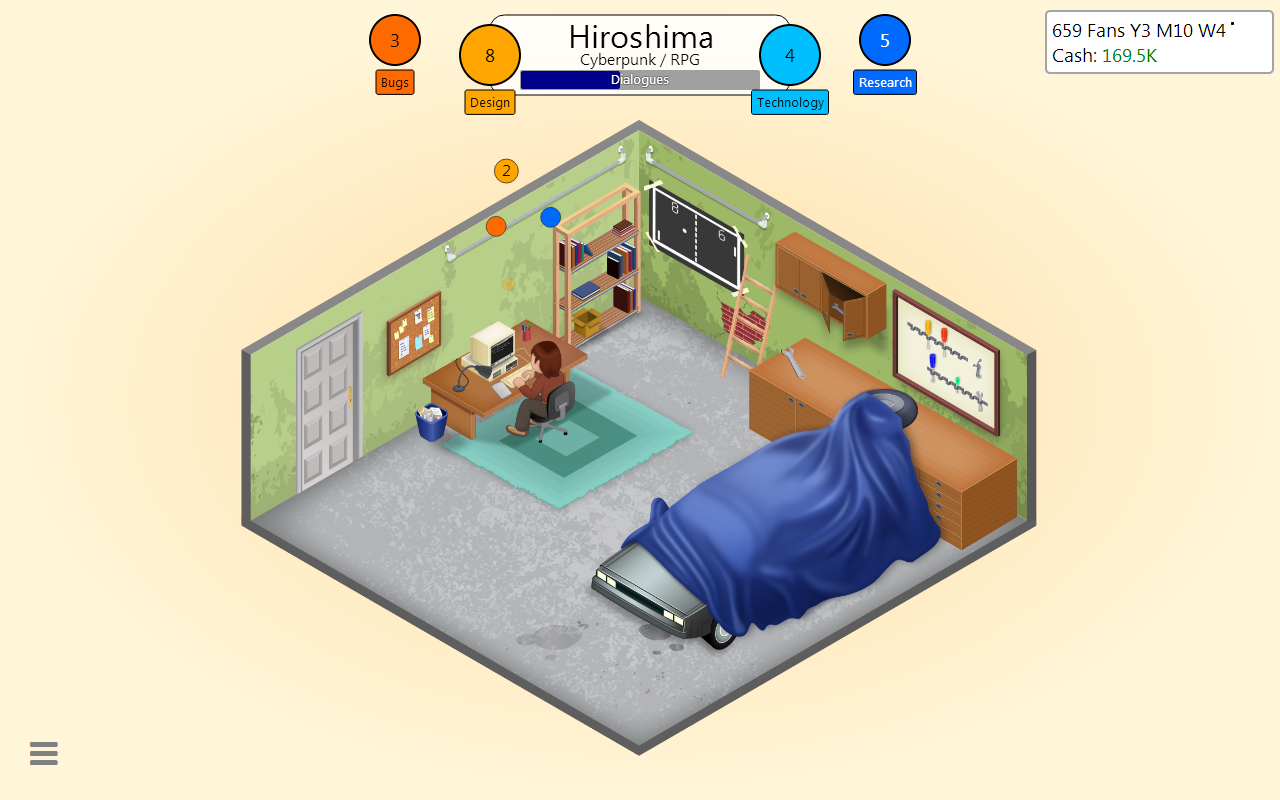 Back in 2012, a small gaming studio called Greenheart Games caught the attention of the gaming media through an unorthodox anti-piracy method for their first major release. One of the studio founders, Patrick Klug, countered early piracy issues by releasing a cracked version himself to pirating sites that played exactly like the finished game, except after a few minutes of play, a message would pop up exclaiming that the player’s games were all being heavily pirated, at which point continuing the game would become impossible because of a stream of lost revenue from piracy. People laughed at the pirates that tried finding ways around this road block, while several who encountered the event and had a sense of self-awareness realized exactly what Greenheart was saying. This was how Game Dev Tycoon became a known title to the mainstream, and that self-awareness is what made it a success.

Game Dev Tycoon is yet another tycoon game, where you start with a small business and explode into financial domination. The difference is that it’s entirely about videogames and the videogame industry. It starts you in the early days of gaming with PC and the C64 (called the G64 here) with a one person start up, then bringing you into the modern era with little knock-offs of the PS4 and beyond while you exercise massive industry power. It’s this coat of paint and love for the medium that sets the title apart, with tons of little visual and text references to famous events and various gaming landmarks, not to mention a healthy amount of shout-outs to other western indie darlings. This connection to gaming itself even becomes important in the mechanics, resulting in an experience more involved than other Tycoon games of its ilk.

The goal is to make games that sell. You have a series of different topics to choose from, five main genres, and various platforms you can release on. Development has you changing values of focus for different aspects at different phases, such as graphics or dialog, and making these decisions based on your knowledge of the type of game being made in question. Once a game releases, the press decides if its good or bad, and that will directly affect your sales. Along with making games, you also have to research new concepts and technologies to make a wider variety of games, generate game reports to see why a certain game did better or worse than expected, move into new offices, hire new staff to make larger or more polished games, and train staff to better improve their ability to make high quality content.

It’s a long grind of a game, but it has all the addictive qualities that come from the tycoon genre in full form, if not more refined. The mechanics and choices are significantly simplified compared to all the resource management of most tycoon games, allowing for more engaging play and experimentation. You can try a run without publishing deals, attempt to make strange combinations that defy the normal styles the game suggests you make, create ever growing mega-engines or specialized ones for different genres, and so on and so forth. While there are some obvious patterns and algorithms to memorize after several hours of play, knowing them only serves to make the game a deeper time sink. There’s also a lot to do late in a game, such as build research centers to look into online distribution and even manufacturing consoles, rewarding skillful play with new mechanics. It keeps finding new ways to hook you in at every turn (including a mess of random events), which becomes its strongest quality.

Game Dev Tycoon was made by a small team, and it certainly shows in presentation. There are only a few short music loops during the entire game, while the graphical assists are lacking, to say the least. Character models are in two completely different styles, based on which direction a given character is facing on the screen, while development progress is expressed through little colored bubbles that would look low end for the DOS era. However, it’s difficult to be put off by this. All the menus, where the game is actually played, are easy to navigate and detailed, and the office spaces added some needed flair in the small details, with little posters and figurines spread around as cute references. The starting garage has a Delorean under a tarp, the first office has a little DOOM homage of a posted titled “MARS,” and Super Meat Boy is hanging out in the corporate office (among other heroes). That’s only scratching the surface.

That sense of humor and self-awareness spreads out through the entire game, referencing famous moments in gaming history with each news report. For example, the announcement of the Nintendo disk system being made with Sony instantly falls apart just a second later in real time, while the C64 is held up as a huge success before crashing and burning a few minutes later. This is definitely a game that respects its history, and has a good bit of fun with it, and modders took notes. The many, many mods out for the game add a few more systems and details, most notably the bizarrely absent Atari.

It should be noted that Game Dev Tycoon is actually based on a very similar title called Game Dev Story, originally a Japanese-only Windows game from 1997 that found new life in the iOS era in 2010. The two games share a ton of ideas, though with significant differences. Game Dev Story is more interested in representing itself as a business simulation, with focus on affecting your employees, while Game Dev Tycoon brings in a role-playing bent with the whole going through the history of gaming angle, along with more creative control on your projects instead of employee control. It’s certainly more than a simple rip-off, learning from the mistakes of its predecessor and creating its own identity in the process.

There are few tycoon games as interesting as Game Dev Tycoon. It comes from a genre filled with profit focused projects over anything of particular artistic merit, which makes the passion put into its creation all the more noticeable. Of course, its greatest addition to the history of gaming is just giving us all an ironic yarn about piracy. It’s going to be a while before someone tops advertising with a rigged crack.