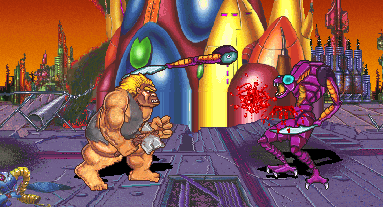 It’s almost always the case that when a particular idea is popular, people will try to copy it. So it goes with Mortal Kombat, a series of fighting games that made a name for itself with its digitzed actors and violent finishing moves. As you may be aware, Mortal Kombat was a pretty big deal on its release, so it stands to reason that everybody would try to top it in some way, whether through more moves, more secrets, or more blood. Sometimes these imitators made an admirable effort at being decent fighting games, like Eternal Champions. Often times, however, they were pretty awful all around. Which brings us to the strange case of two particular games brought out by Incredible Technologies, or more specifically, Strata, their arcade division. 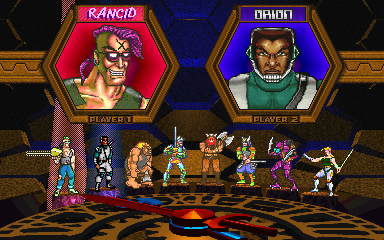 Time Killers and BloodStorm are two games that compare unfavorably to Mortal Kombat, a series that had quite its share of detractors for a long while, itself. The question remains, however, is what makes them special. The thing is, these two games are probably one of the first games to leap into somebody’s head when the words “Mortal Kombat clone” are mentioned. They manage to outgore and be even goofier than the game that spawned them so well that they have at least that going for them, if not too much else. Out of the two games, BloodStorm is definitely the more interesting of the two, for several reasons, but we’ll get there in due time.

The story is one of those “Gather a whole bunch of people from across time and make them fight” sort of deals, only this time, hosted by the grim reaper himself. Somewhat ironically, considering what other games use this plot, the characters themselves aren’t actually dead. And so, as one of these eight losers, it’s up to you to dismember the other contestants, kill Death, and receive immortality. You may wonder what happens when the immortal force that allows for old life to end so that new life may begin isn’t around any more. The game fails to answer this question at any point, but you can imagine that immortality won’t be so hot when the world is full of people who can’t die any more. Should have listened to that one Twilight Zone reboot, Time Killer.

As far as characters go, you’ve got a knight, a samurai, a Viking, a couple of future people, and a caveman, all of whom have as much effort put into their character design as this sentence. Take, for example, Lord Wulf. He’s not just a knight, but he’s the absolute stereotype of a knight in every possible way. He comes from Camelot, and he weilds Excalibur. The only exceptions to this well of creativity are Rancid, a punk from Chicago who goes into battle with a chainsaw, and Mantazz, a goofy looking mantis alien who’s far more interesting to look at then any of the game’s other characters. The game’s boss is Death, and Strata, in a bold artistic move, have eschewed the traditional robe-clad skeleton in favor of a blue-skinned demon guy who wears a blue and lime green jumpsuit underneath the robe. 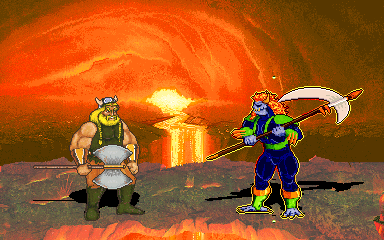 The game’s control scheme is pretty unusual, even compared to the way Mortal Kombat differentiated itself with a block button. On an actual cabinet, the buttons are laid out across a human figure, with two buttons for the front and back arms, two for the front and back legs, and more unusually, one button for the head. You may think that a button solely dedicated to headbutting your opponent wouldn’t be that necessary, but you actually will need to use from time to time, for reasons detailed later. To the game’s credit, there’s been more effort into giving characters unique basic attacks, with stronger attacks generally being done by hitting both of the arm or leg buttons. The game also takes a cue from Street Fighter by having you hold back to block, as opposed to its own button. 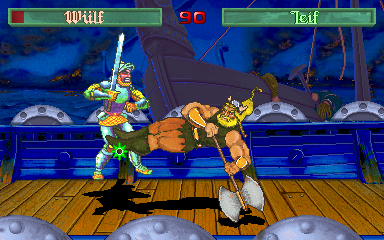 Time Killer‘s major draw is that it doesn’t make dismembering your opponent something cool to do at the end of the match, it also makes it a major gameplay element. Every character carries a bladed weapon of some sort with them, and every so often, a solid hit will actually hack off one of the opponent’s arms. This disables any move related to that arm, as you’d imagine, which can put you at a severe disadvantage. Much like in real life, winning a fight against somebody with no arms is much easier, especially since they can no longer block. If you, on the other hand, find yourself disarmed, you can still use kicks and headbutts to try and eke out a victory. And don’t worry about things like “blood loss”, as characters are restored to pristine condition at the start of every round. 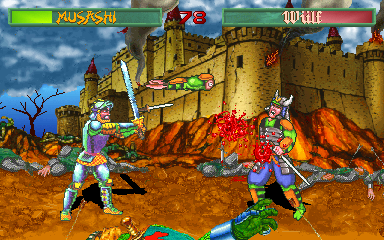 It’s especially great if you can achieve a victory after losing half your limbs, as it proves to your opponent that you’re not mostly armless.

You see what we did there? Mostly armless? Eh? Eh? Oh, never mind.

You don’t have to stop with the guy’s arms, either. By pressing both arm and legs buttons together, you can make your character perform a special spinning strike with their weapon. If you can actually land a solid hit with this, it’ll decapitate your foe, instantly ending the round. Much like the long forgotten pre-Street Fighter II fighter Barbarian, there’s no limit to how many times you can attempt to dislodge your opponent’s head from their shoulders. The one thing stopping it is that it’s got a big windup to it, it can be blocked, and it actually has to land near your opponent’s head. Characters can also be stunned by taking too much damage, much like Street Fighter II, and this opens up a second fatality where you chop off the opponent’s arms before you decapitate them. Sadly, there’s not much variety in killing techniques to be seen here. 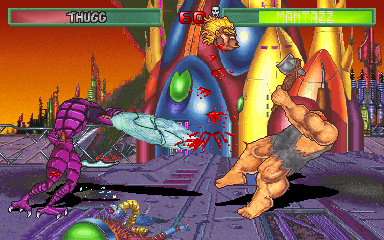 The combat generally feels pretty sluggish overall, and there’s not much room to get fancy, as hits that connect generally push your opponent too far back to follow up on. The real problem is that actually playing a match feels so very random, due to how quickly they can end. If somebody lands a decapitation on you, that’s it. And when you factor in dizzies, which can happen seemingly entire at random, leaving you entirely powerless to defend yourself, it’s really down to luck that determines the winner. It gets to the point where most special moves aren’t really worth using at all, since they have far too much windup for them to really take your opponent by surprise. Your basic weapon attacks alone are generally so much faster and more likely to dislodge limbs, meaning that most matches will devolve to both players jumping around, swinging at random until somebody dies. This is hardly Bushido Blade we’re looking at, here. 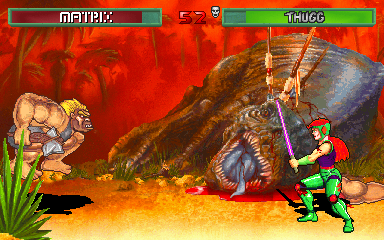 If you’re playing against the AI, it’s especially egregious, because the computer opponents tend to be so aggressive that any sort of tactics besides slashing wildly at them won’t usually work. They’ll often do whatever they can to get right in your face, meaning that the only way to counter it is to try to spam your weapon attacks in an attempt to dismember them a bit. And you better believe that if they get a stun in on you, they willimmediately go for the fatality, no matter what. It’s not the most unfair AI out there, since once you manage to remove an arm or two, the fight gets a little easier. At the end of the game, you fight the aforementioned Death, who can kill you in about three hits, has a flaming dive attack that’s exceptionally hard to avoid, and can only be killed through decapitation. Of course, that’s no surprise for the boss of a Mortal Kombat clone, but you can expect to lose a lot of your credits here.

The graphics are somewhat of a mixed bag. It’s pretty standard sprite art, which has aged somewhat better than a lot of the original Mortal Kombat‘s motion capture, but a lot of it still seems somewhat amatuerish. A lot of the character designs are pretty generic, with the only real standout among the bunch being the purple alien mantis. Between the sprites and the backgrounds, which look like they came straight from a sheet and some colored pencils to the scanner, the entire thing has the look of a high schooler’s art project. It’s somewhat charming, in a way, watching a guy in sunglasses and a chainsaw hacking off a viking’s arm. The music is pretty unmemorable, but there’s a particularly weird gimmick where the game will only play the theme of the fighter who’s currently winning. When you have a character like Orion, who’s from space, fighting Leif the Viking, the soundtrack has a more intense battle than the one occuring on screen. 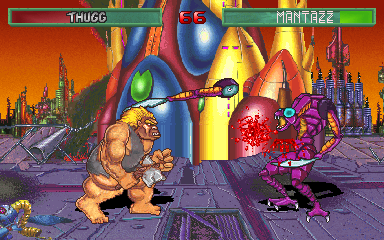 It’s hard to rank Time Killer among the many, many Mortal Kombat clones that have appeared over the years, although it is notable for being the first. It’s hardly as sluggish or obtuse as some of the ones that would come down the line, and it’s at least good for some goofy fun, as long as you accept that any attempt to play this with another human being will devolve into spamming decapitation moves the entire time. If you’re the sort of person who can enjoy mashing a button in an attempt to see who can dislodge the most limbs first, you might enjoy it. 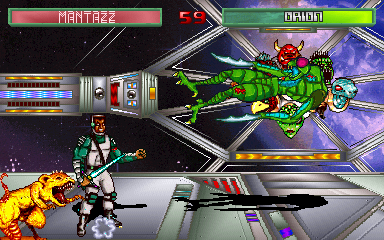 Time Killer was a rather odd case in that it only received a single port for the Sega Genesis. The port was supposed to be released in 1994, but ended up being cancelled entirely. In 1996, four years after its release, and two years after the release of its spiritual sequel, and by the end of the Genesis’s lifespan, the game somehow saw release by publisher Black Pearl. As you may have guessed, the Genesis port of Time Killer was not actually a hidden gem that had been saved from complete obscurity by the benevolence of Black Pearl. Whatever reasons the port had to be cancelled, it turned out that they were quite well founded.

In terms of gameplay, it doesn’t feel especially different from the arcade version. It’s about as clunky as the original, so they got that much right. Visually, however, It’s a mess. The sprites are about half the size of the arcade version and the backgrounds have been vastly simplified, as well as certain other things like the character select screen. It plays closely enough to the arcade version, but with the one thing that made the game look particularly interesting removed, it makes for a pretty tough game to play, especially considering the port’s late release. 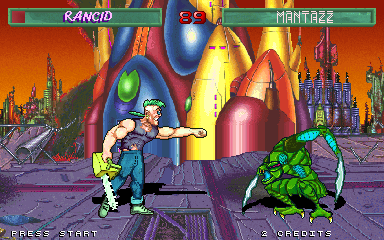 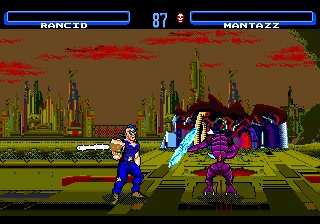