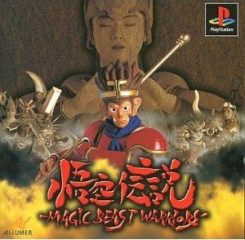 Mortal Kombat had a huge influence on practically every fighting game developed in America. In the mid-90s, the market was flooded with titles with either digitized graphics or extreme violence (or both). Not all of these titles were terrible, but most of them were quickly tossed together garbage, especially the ones released for the IBM PC. In Japan, Mortal Kombat didn’t even have a fraction of its popularity that it enjoyed elsewhere, and so this particular scourge, mostly, passed them over. 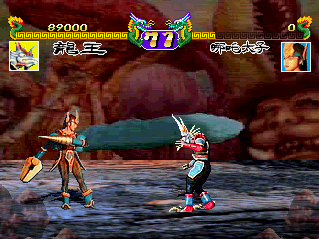 The exception lies with a few bargain basement titles, like Allumer’s Gokuu Densetsu: Magic Beast Warriors. (The company developed a few other fighters previously, including the early Taito arcade game Gladiator and the computer fighting game Blandia.) This early PS1 title reimagines the story of the Monkey King and his Journey West as a tokusatsu-style 2D fighter. Most of the characters are digitizations of actors wearing rubber suits; the few “human” characters forego the suits in favor of outlandish outfits.

This alone looks ridiculous, but the absurdity is compounded by the backgrounds, which are digitized movies of… something? It’s hard to tell considering they’re so heavily compressed that it looks more like you’re fighting in motion JPEG land than an actual environment. The designers also may have been color blind, because the palette consist of sights that no human should be allowed to see. It doesn’t mesh with the designs of the characters, but it wouldn’t mesh with anything that wasn’t a fever dream. 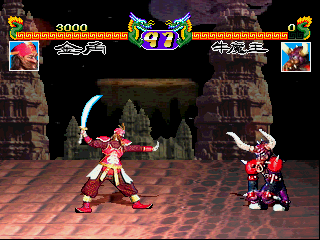 In the main Story mode, you can only control Son Gokuu, but as you defeat each of the opponents, they become playable for the next match. Each fight is preceded by live action footage of rubber suit-clad heroes, as they travel from one preposterous situation to the next. Defeating one character will somehow have you swallowed by… something…? And then end up floating on a rock in the middle of space. Another character has a background that’s apocalyptic conglomeration of several famous landmarks. Such absurdity continues throughout.

The music is glorious butt rock, and it’s about the best thing to accompany something as weird as this. The first fight against Chohakkai has lyrics – it is, unironically speaking, one of the best fighting game soundtracks of the 90s. 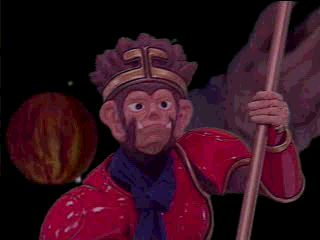 The thing of it is, despite how ugly and weird and bad the game might seem, it’s actually not all that terrible, at least compared to its Western counterparts. It’s incredibly uncomplicated, with no combo meters or special attacks, and the crude animation doesn’t help the overall feel of the game. But it’s not completely unplayable either; it’s the kind of game that you can break out at a party and spend a few rounds awkwardly bashing each other around or watching the cutscenes, without it becoming too painful to actually play.

It is, however, extremely barebones. Outside of the Story Mode, there’s a two player Versus mode where all nine characters are playable. That’s it. No difficulty select, no config menu, not even a pause screen. It appears all of the budget went into the costumes or special effects.