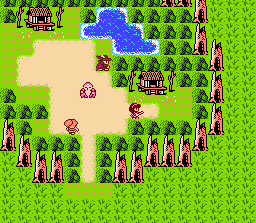 You can’t go two feet into the Famicom library without tripping over a Dragon Quest clone. As an immensely popular NES staple that did its part to help define role-playing games on consoles, Dragon Quest inspired a flood of imitators hoping to cash in on the zeitgeist. But as solid as many of them were, few truly rethought the tropes that Dragon Quest introduced in a meaningful way, instead iterating on the established ideas presented in the series.

This isn’t true, though, for Ghost Lion, an NES RPG by Kemco. This game is special, as it’s one of the few of such titles that was actually localized for North America. Plus it’s a game that feels like it’s ripping off Dragon Quest on the surface, but actually boasts a lot of innovation if you look under the hood for a bit. 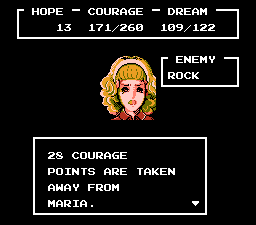 Ghost Lion casts you as Maria, a girl whose village was attacked by the eponymous feline. Your parents set out to find this lion, and as you follow them, a bridge collapses underneath you, washed away by the river below. When you awaken, you find yourself in a strange new world which you must explore in order to find you way home, as well as track down the titular Ghost Lion. Already you can see some familiar threads in this story – namely, the village being attacked – but there are some fresh elements added in, as well. Not only does it star a girl at a time when video game heroes were all masculine, but it also took some very obvious inspiration from The Wizard of Oz, a story that’s not often referenced in video games, at least at the time.

At a glance, Ghost Lion has all the Dragon Quest trappings. You move around an overworld with an overhead view, and random battles will initiate every so often that take place on a black background with enemy sprites representing the foes you have to kill. When you die, you lose half of the money you earn, here called “Rubies”. Ghost Lion feels like it has the most in common superficially with the original Dragon Quest, with only one permanent party member and very few enemies during battles – most feature just one, with only the dungeons and more dangerous areas pitting you against multiple opponents at once. All in all, it’s a DQ clone through and through. 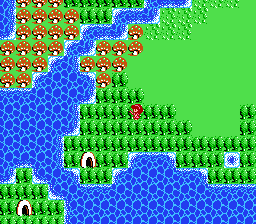 Then things start getting weird. You begin to get items that you can use in battle to summon additional party members. They don’t have a traditional health stat like Maria, but rather a Power stat that both goes down when they act and when they take damage. Once the stat bottoms out, they disappear. Of course, these items are reusable and you can just summon them up again at full Power. At first, you start with a spear-wielding warrior, but you’ll eventually get a cavalcade of potential helpers. Most of them will just be better versions of the warrior archetype, but some will come with magic spells which also cost Power, and can be even more powerful than normal attacks. This completely rethinks the party dynamic in most RPGs.

Another adjusted facet is the concept of leveling up. Instead of earning experience points for winning battles, you only get money. Here, levels are found in treasure chests scattered across the world. This encourages exploration to the extreme, which is a good thing, but it also means that you’ll have some very obvious choke points where you keep throwing yourself against a segment of the game, with no way to improve further until you somehow make it to the next level or just brute force your way through everything. As a result, this isn’t the best innovation, but it’s still enough of a departure from the norm to be notable. 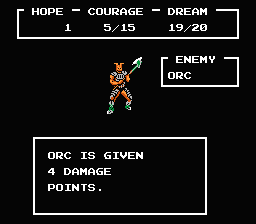 Other than the mechanical tweaks, Ghost Lion also lays on a weird mishmash of themes and content. For instance, you start out in a land of fairies and giant mushrooms, eventually finding your way to enemy towers with human towns on top of them, Egyptian-style pyramids, and castles infested with werewolves. Your stats aren’t labeled the usual stuff like HP, MP, and the like, either. Instead, they’re called things like Hope, Courage, and Dreams. It’s a trippy game that often pulls things from left field.

The graphics are serviceable sprites with generic-looking map tiles, but the soundtrack is catchy enough. The flow of the game is weird thanks to the leveling being tied to treasure chests. Aside from the aforementioned choke points, this method of leveling makes the game easy at some spots before slamming you against a wall, leaving you to pray you can find another Fragment of Hope – Ghost Lion‘s label for Levels – soon.

All said, the game itself is merely okay. It’s still very much an 8-bit RPG and doesn’t quite have the charm of the series it draws from. Even so, Ghost Lion provides an interesting gaze into a type of game that wasn’t seen all that often at the time. Plus the American cover art, featuring a woman in an aerobics outfit, is worth something for the hilarity. 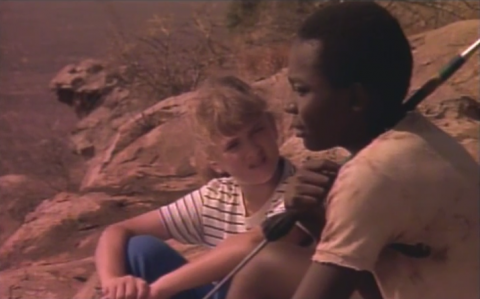 Perhaps the strangest part of Ghost Lion is how it’s based on Pyramid no Kanata ni: White Lion Densetsu, a Japanese movie starring Anne Marie McEvoy, a minor American actress who’s best known for her parts in Children of the Corn and Full House. What’s more, the content of the movie doesn’t match the game’s at all. Instead of a girl transported to a strange land after her village was attacked, Maria and her mother are vacationing in Egypt as her mother is studying the titular lion.

The “other world” in the movie centers on an African tribe who are hunting the lion, and features a boy called Moja, the same name as the first summoned ally you gain in the game. Other than Maria and Moja, the movie and the game only really have pyramids in common. It’s almost as if Kemco only took a cursory glance at a summary of the movie when building the story for the game. Either way, the two share very little in common, so the connection is merely an odd curiosity. The spoken dialogue is entirely in English, though the movie never received international distribution.