In the English speaking world, the text adventure genre was dominated by the likes of Infocom (Zork), On-Line Systems (Mystery House) and Adventure International (over a dozen games by one Scott Adams.) The evolution in Japan shared in a similar path, though with some different games. Zork was translated into Japanese, while Microcabin had their own Mystery House that was sort of similar to On-Line’s, but different enough that they didn’t have to license it. 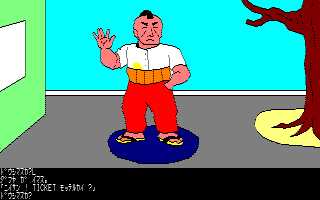 One of the earliest Japanese companies developing games in this field was Hudson, who would later go on to become one of the most prolific video games publishers in the late 80s and early 90s. Their most well known entry is Salad no Kuni no Tomato-hime, which was later ported to the Famicom, translated into English, and released as Princess Tomato in the Salad Kingdom. Their other two prominent titles, Dezeni Land and Dezeni World, are comical parodies set in amusement parks that are ever-so-similar (but not identical) to Walt Disney’s. The title is, like most humorous Japanese things, a pun. “Dezeni” sounds like “Disney”, of course, but when spelled in kanji (“出銭”), it means something like “a display of wealth”.

In Dezeni Land, your job is to find your way into the theme park, make your way through its six attractions, find the treasures that lie within and escape on a helicopter. Each of these attractions is patterned after a prominent area of Tokyo Disneyland from the early 80s – the International Bazaar is the World Bazaar (an adaptation of Main Street USA, as it’s known in America), The Pirates of the Sento Island Sea is The Pirates of the Caribbean, Jungle Claws is the Jungle Cruise, Horror Mansion is the Haunted Mansion, Space River is Space Mountain (and features Momotarou taking a spaceship into orbit) and Underneath Plum Manor is a spoof of Meet the World, the equivalent of the Carousel of Progress. The progression through the game is linear, with puzzles often requiring items from previous areas. Most tasks simply revolve around simple lock and key type fetch quests, and are fairly straightforward. 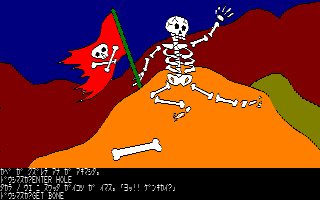 Like many early 80s text adventure games, the visuals are quite basic, and are drawn and colored in while each screen loads. Interestingly, while most of the text is in Japanese, all user input is handled in English. It’s tough enough to struggle with a parser in a language you do know, but imagine being a Japanese person with only the most basic knowledge of English gleaned from movies and grade school, and being forced to figure out what to do? The “look” command is kind enough to translate all objects into English so they can be easily interacted with. But many Japanese gamers had complained about the use of more advanced words like “Attach” and “Polish” in order to solve some puzzles.

Beyond the language barrier, the parser is extremely basic and can’t even handle prepositions, so a command like “kill lion with dagger” will need to be typed as “kill lion dagger”. (Yes, you do need to murder a lion in the jungle ride. But, to be fair, he is in your way.) And strangely, while most English text adventures required that you use the cardinal directions for movement – (N)orth, (S)outh, (E)ast and (W)est, Hudson’s games instead use (F)orward, (B)ackward, (L)eft and (R)ight. 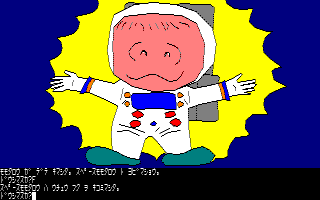 Dezeni Land isn’t much different from similar types of games of the era, Japanese or otherwise. The color palette is limited but insanely bright, and the pictures are drawn with lots of straight lines and angles, creating a sketchy, though still goofily charming, visual style. (The piano monster in the Horror Mansion is most amusing, and the Hudson Bee shows up in a few places.) It may not be much, but it helped set the tone for the substantially more off-the-wall sequel.

Interestingly, Dezeni Land was ported to the SPC-1000 computers in Korea, where it was actually called Disney Land and featured actual Disney characters on the cover, even though none appear, not even any parodies, in the actual game. The graphics are drawn entirely to black and white (similar to some of the weaker Japanese computers), although they have also been translated fully into English. 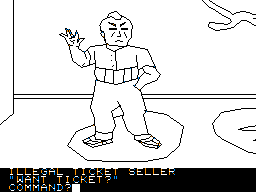