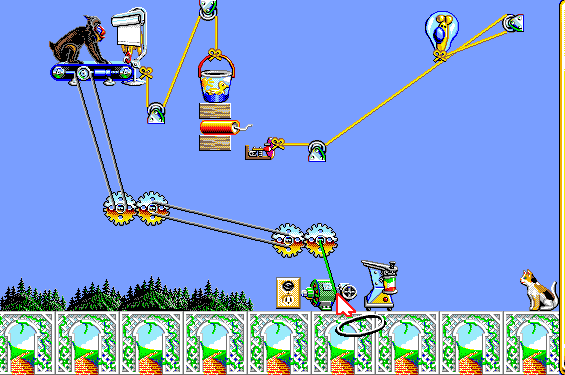 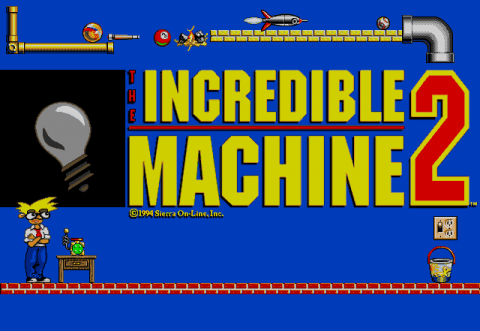 While Incredible Toons made for an interesting detour, it’d take one more year for the series to receive a true sequel. It was worth the wait – Incredible Machine 2 offers everything that made the original game work, while adding on just about everything that a sequel at the time could have needed. It makes for a much more solid, polished work all around, and it’s not a huge surprise that this one game served as the basis for almost the entire rest of the series. To be truthful, it’s not that different at from the original game, but this sequel also took what worked from Incredible Toons and applied it to what was a more solid foundation.

Just about every part from The Even More Incredible Machine makes a reappearance, along with a wide supply of new tools to work with. Unlike the weird toon logic of the previous game, the new parts here make a little more sense – in that weird, Rube Goldberg way, at least. Laser emitters need power but will fire off a beam that’ll light fires, reflect off of mirrors, and activate certain switches. Fire itself can be created through candles, bumping flint rocks together, and can be used to get tea pots boiling, light fuses, or send hot air balloons soaring. Pipes are useful for getting anything that’ll fit through them quickly from one place to another, with curved pieces helping them reach further off into new directions. There’s a lot to play with, and it’s generally fairly intiuitive. 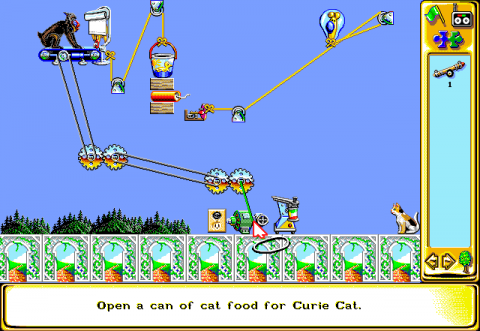 There’s also can openers, which somehow aren’t as effective as luring cats as they are in real life. Curie won’t care unless the food is in her line of sight.

Much like Incredible Toons, puzzles are now separated into four different difficulties, plus a set of tutorial levels. Unlike previous games, every puzzle can now be played at once – to be honest, it didn’t really make a lot of sense that it didn’t work that way previously. The difficulty curve feels a little smoother here, with puzzles that have a few less red herrings and are somewhat more obvious what you’re supposed to – at least for a little while, before things begin to ramp up. Some of the previous issues of earlier games still remain, like times when pixel perfect item placement can mean the difference between victory and failure, or the way repeated attempts can’t be made any faster.

The entire game is a little more user friendly overall, from the puzzles themselves to the user interface. The menus offer a help button to explain what the various buttons to, along with a “tour” mode that runs a demonstration on how the various modes work. In the game itself, the easier puzzles offer optional hints you can click on, which will give you clues on what needs to go where. It’s never too game-breaking, since the further you get, the less hints you’ll receive, until they eventually stop showing up entirely. What really helps, however, is that every item you can move comes with an icon you can click on for a brief description on what it does and what will work with it, which can save you a big headache. 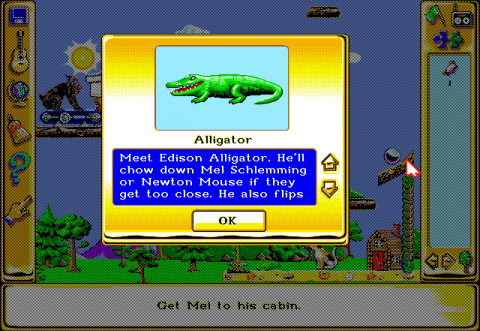 The two player mode also makes a return, with 50 unique puzzles you can challenge your friends to see who can come up with the faster solution. It’s possible to play any puzzle in the game like this, as well, which while not the intended experience, makes for a neat touch. The sandbox mode is also here, and for the very first time, it’s possible to set things so the game actually recognizes when a solution has been achieved. It’s fairly robust in that regard – you can set it so victory happens when certain things are in the right place are off the board, when objects have reached a certain state, or if there needs to be a delay before victory happens. It makes something much more usable than what was basically just a toy, and it’s actually pretty fun putting parts together into an actual puzzle. 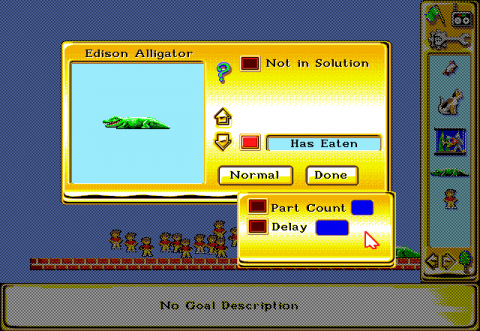 Hey, kids, here’s a fun way to make your parents worry about you.

The resolution has seen a bump, which makes for a larger playfield and bigger sprites. While the animation isn’t quite as extravagant as Incredible Toons, there’s some cute touches, like the alligator’s little Muttley laugh every time it eats something, or the way the cat will stop to meow at you if you leave it idle in a running puzzle. There’s also the addition of ‘scenery’ objects that , like clouds, mountains, starfields, or wallpaper that help give a sense of place to the puzzles instead of being stuck with the same sky blue playfield. It’s a small touch, but it makes a difference for sure. 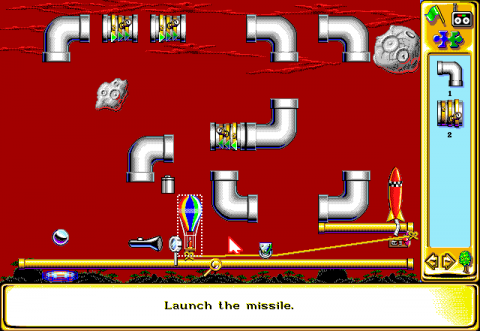 The music remains just as varied as previous games, especially if you choose to use the optional CD soundtrack. More of the tracks make use of vocals, like a hip-hop track with theme-appropriate lyrics, or a hoedown-style track where a country guy in the background keeps making comments about his broken truck and hogs. Not all the tracks are quite that silly, but there’s quite a few tracks that are charming enough to be memorable. 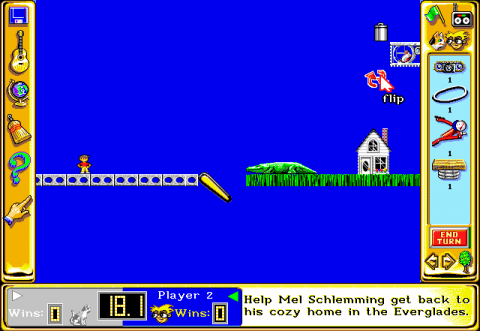 Overall, unless you’re absolutely dying for more puzzles to solve, it’s this particular game that obsoletes every game in the series that came before it. While it’d be improved upon somewhat with later versions, if this is the game you chose to stick with, you wouldn’t be missing terribly much. Sure, it still has some flaws it couldn’t shake from previous games, but if you can live with that, you’ll find a pretty approachable puzzle game here.

A year later, the game would be rereleased for Windows 3.1 under the somewhat misleading title “Version 3.0”. There’s no new content to be found here, rather, the interface has been changed to make sure of Microsoft Windows’s use of toolbars and draggable windows. The sandbox mode now also places the various pieces in different categories selected with various tabs, which makes finding the part you’re looking for a lot easier. 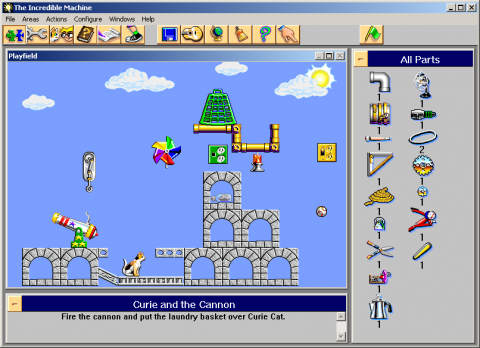 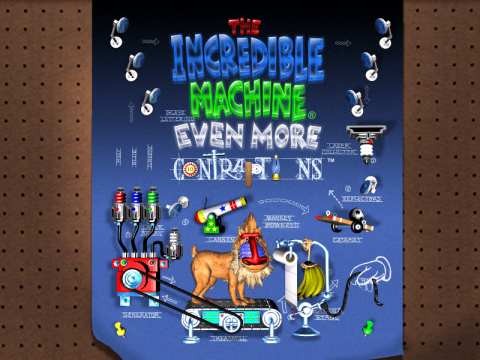 Return of the Incredible Machine – Even More Contraptions

Despite a title that makes it sound like more than it is, Contraptions is more or less just an updated version of TIM2. The part list is almost exactly the same, aside from a few holiday easter eggs and a ball you can customize the physics of, and even all the puzzles from that game have returned. On top of those, however, there’s about a hundred new puzzles scattered across the various difficulties, which makes for a decent amount of extra play time. 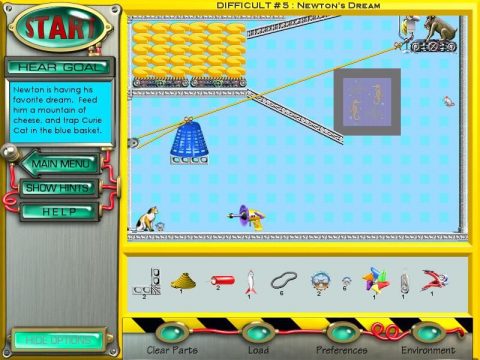 Return of the Incredible Machine – Even More Contraptions

On the visual side, everything has had a computer rendered makeover, which must have looked good in the year 2000, but lacks the charm of the pixel art of previous versions. There’s also some new music tracks to go along with the old tracks, which helps the soundtrack stay just a little bit fresher. Overall, if you can handle a possible overdose of CG rendering from the year 2000, the new puzzles and minor interface tweaks mean there’s no reason to not make this version your preferred one.

A year later, The Incredible Machine: Even More Contraptions would be released. It’s the same game as Contraptions, only with a set of 200 new puzzles and some extra music tracks, including some returning from the original TIM. The CD also comes included with a smaller game made for Palm OS machines. This was formerly a shareware game sold under the title Puzzles-In-Motion, but at some point, Sierra bought the rights to it and had it included with Even More Contraptions. 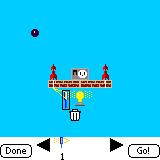