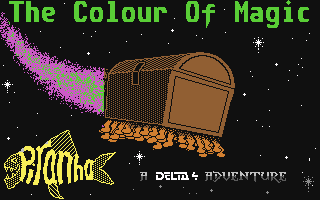 Terry Pratchett is one of Britain’s most popular, and most valued, humor writers. Since he began his Discworld series in 1983, he’s written nearly forty novels set in the same universe, providing an expansive library that outstrips other fantasy authors many times over.

Discworld is about a world, appropriately shaped like a disc, which is held on the back of four elephants, who in turn are standing on the back of a giant turtle that flies through the cosmos. The Disc is a fairly typical fantasy universe, filled with wizards and barbarians and the like, although all of the common tropes are skewed and lampooned relentlessly, and there are numerous parodies, of both other fantasy fiction and of real life figures. At the heart of the Disc is the city of Ankh-Morpork, a den of filth and villainy that most would rather steer clear of. It’s a city so rank that it contains legalized Thief and Assassin guilds, because regulated crime is easier to maintain than unregulated crime, or so their logic goes. It’s a funny, richly detailed world, and there are dozens of recurring characters.

Despite its popularity, Discworld‘s transitions into other media have been relatively limited. There have been a few comic books, some radio shows, a brief animation series of Channel 4, and a handful of live action made-for-TV films released in the early 21st century. There are, however, four adventure games based in the universe, many of which take elements from various books but are largely original. The first game, a text adventure, is a pretty faithful adaptation of the first book, but the other three are graphic adventures. In fact, the games often do a better job of representing the Discworld universe than any of its other adaptations, making them quite unique in that sense.

Like many licensed games, the rights for Discworld are in limbo, making it difficult for any re-relases. Hopefully something can be ironed out in the future, to make the first two graphic adventures more easily available, or make Discworld Noir run more readily on modern systems.

Now, The Hitchhiker’s Guide to the Galaxy proved to be one of Infocom’s most successful games, so why not go down the same route and adapt Discworld into a text adventure? The Colour of Magic, based on the very first book in the series, puts you in the shoes of hapless wizard Rincewind, as he becomes a guide for the naive tourist Twoflower. The game is divided into four acts and follows the book closely, with the first two acts taking place in the city of Ankh-Morpork, the third in the upside-down dragon city of Wyrmburg, and the fourth in the country of Krull, which is perched on the edge of the disc.

There are occasional graphical portrayals of certain locations, although they’re bland and ultimately pointless. The game is slightly bizarre in that it refers to the player in the third person as “Rincewind” rather than in the second person, as typical of other text adventures. It also tried to add to the flavor by requiring that you navigate via Discworld directions – instead of North, South, East or West, you need to use Hubward, Rimward, Turnwise or Widdershins, respectively. It purports to be clever, but it’s more confusing than anything. Indeed, the whole of the text parser is pathetic. In order to converse with someone, you have to first type “TALK TO ___” and then “SAY ____,” unnecessarily dividing a single command up into two. Good luck trying to get it to understand what you’re talking about anyway. At one point you need to feed milk to a cat. You’d think “GIVE MILK TO CAT” would work, but the correct solution is simply “DROP MILK.” Certain events occur on a timer, and it’s possible to miss them, rendering the game unwinnable. While the text captures Pratchett’s prose well (and seems almost to lift from it in spots), these issues immensely hamper the enjoyment and doesn’t provide anything new or interesting like the Hitchhiker’s game did, so you’re better off just reading the book instead. 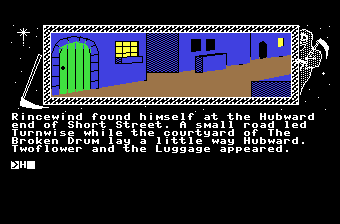 Another adaptation of The Colour of Magic was released in 2006 for mobile phones, although it’s an isometric action game rather than an adventure game. 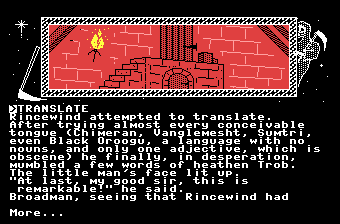 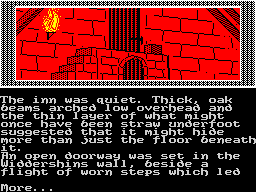