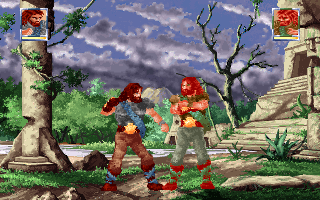 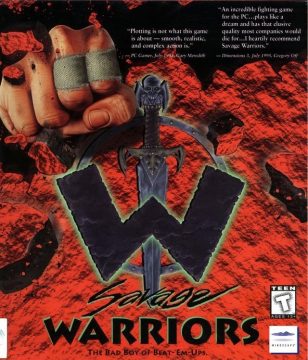 Savage Warriors proclaimed itself as “The Bad Boy of Beat ’em Ups” on its box when it was released in 1995, a title that looks pretty silly now. To be fair, it was a technically impressive game for its time. It had 3D graphics (with 2D gameplay), a cast of 10 characters, and interactive environments. Back when it first came out, Savage Warriors received generally positive reviews praising its graphics and cheat mode. Unfortunately, Savage Warriors’ graphics have not aged well, the cheat mode means nothing, and all that’s left is an anemic fighting system with tacked on “interactive” environments. 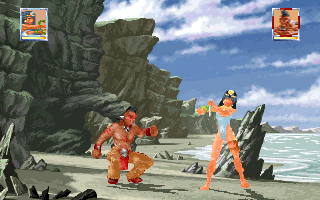 The visuals are quite strange. Just looking at it, you can see low resolution, blocky, and sometimes ugly character models amongst beautiful hand painted backgrounds. There is something to be said when a game looks both stunning and awful at the same time. The sound features a handful of voice clips per character, most of them being grunts, but there are a few words here and there. The announcer has a distinct French accent, adding a bit of character to him.

The story involves characters from many different time periods from all around the world fighting each other for a character known as The Master. Other games use a similar premise, notably Time Killers, Eternal Champions, and World Heroes. The characters are all goofy in their own way. Some of the more interesting ones include a soldier from the Vietnam War that looks suspiciously like Arnold Schwarzenegger from Predator, an anarchist with a club hilariously named Meatball, and a dinosaur-like monster that seems very out of place next to the rest of the cast. The moves themselves would be pretty easy to execute, except the keyboard was never meant to be used with fighting games. The keypad is terrible for rolling motions, and even if you use a gamepad, it’s still pretty unresponsive. You can also disarm characters that use weapons by hitting them hard and fast enough, which can be useful when fighting the computer and frustrating when the computer decides to cheat. 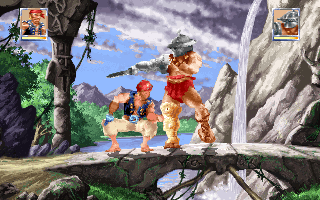 The AI is inconsistent. Sometimes enemies will just sit there and let you beat them senseless and other times they will effortlessly dodge all of your attacks, perform combos, and even button read. This applies to all difficulty levels, as the higher ones have substantially more cheating in them than the lower ones.

Speaking of cheating, Savage Warriors has an extensive cheat menu. Most of the cheats are kind of boring, but one of them turns the game from a 2D fighting game into a 3D fighting game. The 3D cheat may seem kind of cool at first, but it’s basically using the same clunky controls and the same silly, but sadly shallow characters, but with an extra dimension. A CD version was produced that includes a new soundtrack and some new characters. Sadly, the new characters are all clones and are not very interesting. 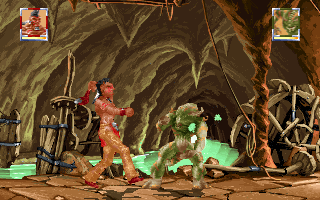 Savage Warriors was developed by Atried Concepts, which was later bought by Mindscape and turned into Kalisto Entertainment. The lead programmer, Sebastien Wloch, continued work at Kalisto Entertainment and went on to make Nightmare Creatures, an action horror game that is actually pretty good.