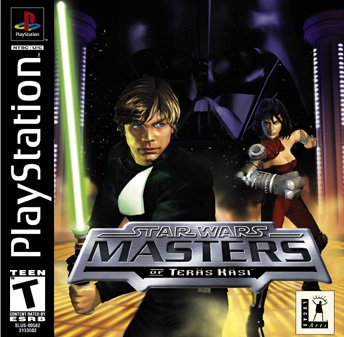 On paper, a Star Wars fighting game sounds like a terrific concept. After all, some of the most famous parts of all the films are the lightsaber duels, thrilling, choreographed battles where blades clash and glow, with one false move leading to dismemberment. It’s no surprise that there have been many, many attempts to recreate the excitement of these fights, with some games having far more success than others. And then there’s Masters of Teras Kasi, which takes the concept of “Star Wars fighting game” and runs in the opposite direction entirely. It’s also not a very good game at all.

The game takes place sometime between A New Hope and The Empire Strikes Back. With the destruction of the Death Star, the Empire seeks revenge on Luke Skywalker and the Rebel Alliance. To this end, they hire the assassin Arden Lyn, which may or may not be a terrible pun. Arden Lyn is apparently really good at kicking people in the face, which may seem like a disadvantage, considering she’s fighting people with guns and lightsabers. (Apparently, she’d end up getting a surprising amount of backstory in the Extended Universe, although that’s all been thrown out by now.) The Rebel Alliance finds out about this plot, and decide to stop Arden by beating the crap out of each other. Which you think would be counterproductive to the survival of the Alliance, really. 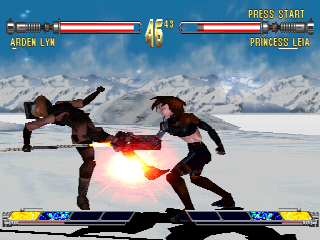 It’s a little odd, even for a fighting game, that Luke is supposed to beat the crap out of his own sister with his lightsaber, although even leaping into the air and slamming it through her chest will always be a “knockout”, at worst. Ah, fighting game logic, where would we be about you?

All the big names of the original trilogy are here as playable characters, even the ones that you wouldn’t think would even fit in a fighting game. You could let Han Solo slide, since he’s a tough guy who probably punches people a lot. Suspension of disbelief is a lot harder when you’ve got Boba Fett kicking people square in the face. There are also a couple of other nobodies, including a random Tusken Raider, and a Gammorean named Hoar. Which is pronounced exactly how you think it might be. The final boss is Darth Vader, who disapprovingly enough, fights just about like his light-sided son.

There are no shortage of fighting games on the PlayStation, and Teras Kasi isn’t one of the good ones. There are certainly far worse, but trying to play it is a complete exercise in frustration. The biggest problem is that the controls and animation feel far stiffer than what’s comfortable for a fighting game. Every time even your most basic of moves, it takes far too long to get to a point where you can do another attack. Even something as trying to get up from a knockdown isn’t a sure thing, and it’ll be completely random if you’ll either get up right away, or be stuck on the ground so long that your opponent will be completely free to stomp you for extra damage. 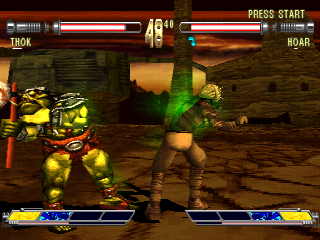 There’s also an odd gimmick where most characters have weapons, but they have to be equipped with a separate button for you can actually use them. For somebody like Han Solo, you might imagine that you’d want his blaster out at all times, anyway. The problem is that your special moves change entirely if you have a weapon out or not, meaning that’s twice the moves you have to memorize. A lot of the special moves are actually done with Street Fighter-style motions, including a lot of half circles, and it’s a matter of luck if the move you’re trying to do will actually come out, meaning that special moves usually aren’t worth the trouble when just punching your opponent usually works better.

If you’re playing this, you’re most likely going to end up playing it against the AI, which has no issues with the controls as you do. It’s not completely insurmountable, but it can be rather frustrating to fight, especially when it never has trouble pulling off its special moves like you will. This is especially rough, considering how much damage some of these moves can do. Luke, for example, has a move where he throws his lightsaber at you. Not only does this move do about 75% of your life on hit, it’s also entirely unblockable. The AI can and will use this move against you if it has the meter to do so, and it doesn’t have to worry about trying to get in the half circle motion required to do it.

The problem with the game is that, for one reason or another, most of your moves aside from the one that use up your entire meter are generally never worth using. Most of your special moves barely do enough damage compared to your basic attacks, if they aren’t too hard to reliably pull off in an actual fight. It doesn’t help that many of your special moves are more likely to launch you right off the side of the arena, which instantly ends the round. This is actually an incredibly common occurrence, even for the AI, and watching Darth Vader accidentally walk right off the arena and fall to his death will be the most joy this game can offer you.

It’s a shame, because there could be a decent fighting game in there, with a lot of work. At least the production values are pretty decent. The models are surprisingly well crafted, given the year, and make use of some rather pretty lighting effects at times. Every song you’d expect from the John Williams soundtrack is in this, and most of the voice acting is taken right from the films. Except for Darth Vader, who rather jarringly doesn’t sound like James Earl Jones in the slightest. It’s sad that Teras Kasi looks so much better than it plays, because there’s actually a lot of wasted potential in the concept. At the very least, the concept must have inspired somebody to add in the Star Wars characters to Soul Calibur IV, which was a much better game. On the bright side, at least Yoda isn’t in this game.