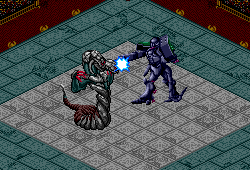 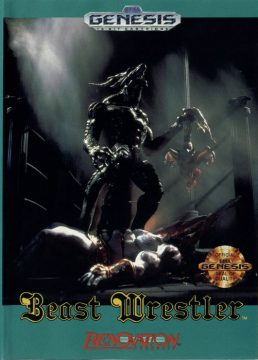 The year 1991 was huge for the Sega. The infamous “Genesis does what Nintendon’t” campaign began airing on televisions across the US. Streets of Rage was released and universally praised for its fast action, incredible soundtrack and cooperative gameplay. In the summer of 1991 Sonic the Hedgehog exploded into the public consciousness and spawned countless imitators as well as a merchandising empire Sega still profits from now.

About three months after Sonic the Hedgehog‘s debut, Beast Wrestler was released to zero fanfare and almost immediate obscurity. 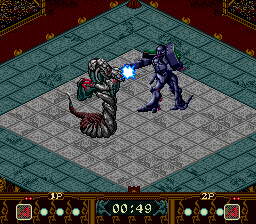 Developed by several Telenet/Renovation regulars under the name Riot, Beast Wrestler is a project that, in the hands of anyone else would probably have become a great game. Instead, it’s plagued with a questionable English translation, bizarre hit detection, and the extreme simplicity for which most of their games are infamous. Other titles from these developers like Valis and Last Alert get by on personality and being fun to play, but Beast Wrestler is probably one of the most tedious wrestling games ever made.

Everything here is slow as molasses. If you get knocked down, you’re not getting back up for a solid six seconds or more, which is forever in terms of a game about giant monsters struggling with each other. The animations for each move are very short but are looped for way too long before a move is completed, so you spend a lot of time watching some of the laziest animation ever play out over and over again rather than actually playing the game. That said, in a lone flash of competence, I do appreciate that the developers use the Fire Pro Wrestling controls for grappling with an opponent. So instead of having to furiously mash a button like in most wrestling games of the time, with the fastest button pusher winning, the game is supposed to reward timing and strategy.

Much like everything else in the game, however, this ends up not being very fun as the computer opponent works by reading your inputs instead of reacting to what’s happening on screen. Also, while the game is viewed from an overhead perspective, the sprites are drawn in profile, meaning you have to move a character “lower” or “higher” on the screen to make sure your attacks connect properly. This makes for a weird disconnect between the sprite design and the actual controls that makes the action look at stupid as possible. It also has the unintended effect of making many of the attacks look highly sexualized. Speaking of which, one of the beasts, Airhohle, attacks by lashing at enemies with its two story tall penis.You can improve your particular beast by buying items to make them stronger or faster, and you can also use a genesplicing device to combine their abilities with that of another beast to get a new unique creature once you’ve beaten them and gotten their combat data. Again, great idea, but you only have two opportunities to do this during the entire tournament, making for a small variety of monsters to use. The worst part of this is that you can’t use your uniquely developed creature while playing against your friends! Instead you can only choose from a set of pre-made ones, which you cannot use in the single player game. The game uses passwords to save up your creature’s abilities and type, and with such a small selection it’s crazy that you can’t have two players put in passwords to use their own creatures at the same time.

The story in the single player tournament is pretty basic. You want to become the DRAGON WARRIOR, this is the title given to the person with the most powerful beast, so you buy a giant dragon man thing from a mad scientist and go at it. The most important thing about this story is the term “bovice.” It’s a typo, they meant to call you a novice, but it’s the most fun thing in the game. The game refers to each contestant as a Ruler, though each in fact is just another person who grew a huge monster in a vat. The opposing humans that control each beast were designed by someone the game credits only as “Sandman.” Despite the pseudonym, they look no different from what you’d see in a typical Japanese adventure game of the time like Exile. So they had a different person do character portraits that clash greatly with the rest of the game’s style.

The one notable thing about this game is its setting and creature designs. They were done by model maker/character designer Yasushi Nirasawa, famous for creating many of the beasts in the Kamen Rider franchise. Beast Wrestler was one of his few video game works, though much more importantly he designed many of the new demons in Atlus’ Shin Megami Tensei IV (2013). This is actually pretty fascinating as you can look at models he made for his Creature Core column in “Hobby Japan” in the late eighties and see the clear resemblance to his designs for both Beast Wrestler and in Shin Megami Tensei IV. Sadly, Riot had difficulty really translating the detailed skeletal anatomy of his designs into the game’s graphics, which are generally indistinct and uninteresting in motion. Though the various forms you can take throughout the one player tournament are at least clearly his work. Of all the wasted potential that is Beast Wrestler the monster designs are the one thing that, due to Yasushi Nirasawa’s talents, almost succeeds in spite of the game. The game’s awesome cover is also his work. 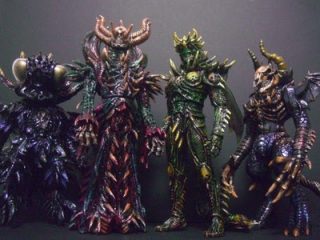 The game takes place in 2020, but most of the beasts are more fantastical in appearance (a few like Ploguraz and Micara are clearly inspired by Assyrian and Persian mythology). The arena the beasts fight in is also fully medieval themed, but with a poorly executed futuristic city scape in the background. If more work was put into this it would make for a unique setting, but every aspect of the game’s visuals are half-baked. To show off the massive size of the beasts, the spectators are a mass of undetailed pixels in the distance, though the ring perspective and layout makes their actual size vague. The game lists them at an average height of eight meters but the perspective makes them look almost double that size. It might seem harsh harping about the background, but it actually isn’t because guess what: It’s the ONLY BACKGROUND IN THE GAME. 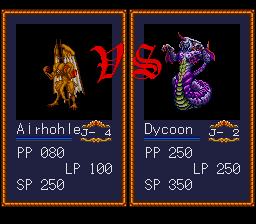 Beast Wrestler‘s music is mostly a joke. It’s puzzling how you can get a model maker/sculptor to design some really out there monsters, come up with the even more out there setting that mixes European medieval trappings with five stories tall genetically engineered cybernetic monsters, and have that inspire in one of the Sega Genesis’ least impressive soundtracks. The menu select song is particularly “impressive.” Sound design was handled by Takaharu Umezu and Shinobu Ogawa. They are responsible for several of Telenet’s other mediocre soundtracks, so this isn’t surprising. And yet, here we are, decades later, everyone gets a kick out of seeing how horrible this game is. It lives on because its premise is great and they did at least have some serious talent on hand in the monster design department. It’s a game that should have been amazing, if only anyone other than Riot had developed it.