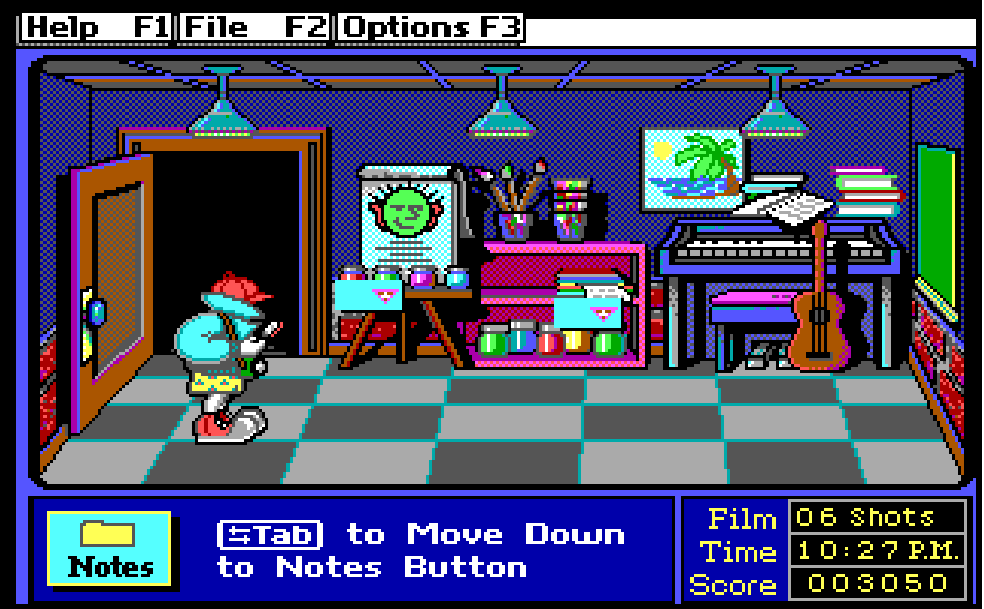 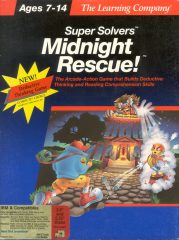 The Learning Company created many of 90’s kids’ favorite edutainment games including Reading Rabbit. One of the lesser-known titles that came out at about the same time was the Super Solver series with the first entry being Super Solvers: Midnight Rescue! This reading comprehension and logic skills-centered program was targeted for ages 9-12. The Super Solver walks the halls of Shady Glen High School in search of the robot Morty Maxwell is hiding in. They have to find the Master of Mischief before midnight otherwise he’ll make the whole school disappear!

The Super Solver is armed with a camera to take pictures of the robots that will abruptly reveal themselves in puffs of smoke in the school halls and rooms. These photos are needed to find out where Morty Maxwell is hiding. If the player quickly takes a picture of the robot, it will disappear, but if the player hesitates, the robots will lobby attacks such as a squirt bottle, paint, or a cream pie. To avoid these silly volleys, the player can dodge the attacks and then take a picture. However, if the robot hits the Super Solver, the player will be knocked to the ground, time is lost on the clock, and the robot disappears. 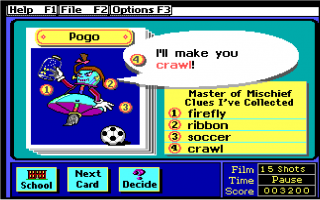 At any time, the many named robots such as Turbo and Rollo will appear randomly. It’s very easy for the Super Solver to accidentally run into one and be knocked to the ground. Sometimes more than one robot in a row will manifest. This can cause the player to run out of film for the camera. If this happens the Super Solver is at the mercy of the robots unless they can run into another room or upstairs or the robots just disappear after pummeling the player repeatedly. Film can be restocked at a film station, but only to a certain max amount. The location of the film machine changes with each round.

To determine which robot is correct, the Super Solver must find multiple triangle envelopes on the two floors of the high school. Morty hid them both on objects in the hallways such as water fountains and corkboards and the many rooms of school like the Principal’s Office and the Auditorium. Once a player finds a clue, they open it to find one of over 400 newspaper articles, letters, diary entries, or another form of reading material to peruse. These are roughly a page or two long and occasionally even include excerpts from popular books such as Doctor Doolittle and Winnie the Pooh. There is also a handy button that helps players decipher the meanings of tougher words. After the player finishes the reading, they’re asked a question about the material. 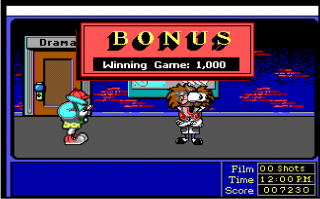 If the question is answered correctly, the player earns the answer as a clue to finding Morty’s location. The player has two tries to guess the correct answer, though the second guess earns the player fewer points. If the player can’t guess the right answer, then the clue is hidden somewhere else in the school and must be found again. Some of the envelopes found will award the same clue though the player gets additional points for solving the question. Other envelopes are dummy clues that consist of taunts or hints from Morty Maxwell.

All these tasks have to be done before the games’ inner clock runs out, though the timer is paused every time a player looks at clues either in envelopes or the ones already collected. The clues consist of what the correct robot is holding, wearing, and saying which can be anything from a rubber nose to an owl to a big jar of paste. The correct robot must match the clues exactly. To win the game, the player must decide with their collected material which robot is correct. If they guess correctly, Morty Maxwell is found and his plot is thwarted. If they guess incorrectly, Morty succeeds and the Super Solver is turned invisible along with the school, and no points are awarded for the round.

Each round of the game is the same process. With each win, the player gains points that are tallied at the end of each round. As points are accumulated, the player gains a new rank and the difficulty of the game escalates. Points are earned primarily by answering clues correctly and taking pictures of robots, but at the end of the game, the player is given bonus points for catching Morty, for how much film they have left on their camera, and for how much time is left on the clock. As the player rises in the ranks, they slowly build a trophy and more challenging is gameplay is added such as a lack of hints and having to take more pictures of robots. 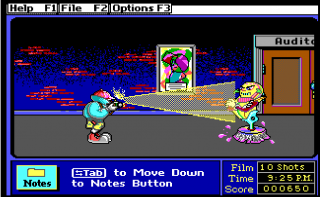 The visuals are decent for a late 80s IBM PC title. The characters move smoothly and the rooms have a decent amount of detail. Though no voice acting was possible at the time, the game did have sound effects and music throughout. “The Sorcerer’s Apprentice” by Paul Ducas played in the halls and “The Hall of the Mountain King” by Edvard Grieg played in the rooms.

The Super Solver is just a vessel with which the player can interact with the world of Shady Glen and the robots don’t speak. The only character who has any development is Morty Maxwell himself. The player only actually sees him at the end of each winning round, but the player can find diaries he’s written or diaries other people have written about him, so the player learns more about the villain’s love for mischief and magic over time. 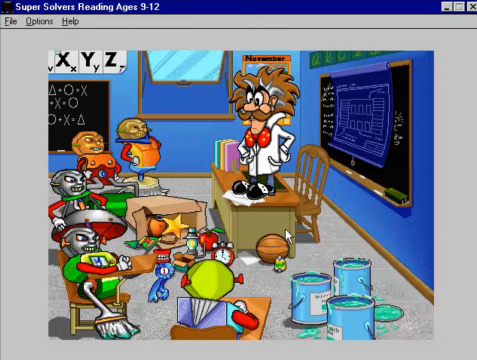 Despite the game scaring kids, the program was so popular that in 1995 it got a graphics makeover and voice acting for a narrator and Morty Maxwell. The gameplay didn’t change except for the new use of a mouse instead of just the keyboard, but the game did get two fully-animated and voice-acted cutscenes. The first is an opening cutscene where Morty talks to his robots about his dastardly plan and at the same time gives a tutorial to the player. The second cutscene is available if the player loses and in a very unnerving fashion, the Shady Glen High School slowly disappears into darkness.

This success of this game inspired subsequent games in the series such as Super Solvers: Outnumbered! (1990) and Super Solvers Treasure Mountain (1990). Outnumbered! has very similar gameplay to Midnight Rescue!, but the game is set in the Shady Glen TV Station and the player has to find Morty’s location in a room by solving math problems while occasionally encountering Telly the Robot and Livewire. Treasure Mountain diverted from the formula and adopted a fantasy setting where the Super Solver catches elves with a net to find clues and uses coins to find treasure as they climb the mountain to stop Morty Maxwell.

To some 90s kids this game produced fond memories and for others nightmares, but it will live on in emulators forever.