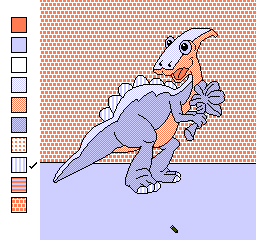 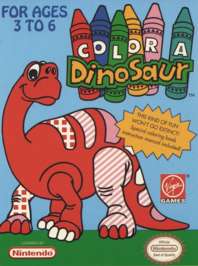 In the early 90s, a developer called Farsight Studios got their start in the industry working on the notorious Action 52 as well as a series of art programs for home consoles. First came Videomation, a very primitive drawing program for the NES, and then Art Alive for the Genesis, which is a sort of antecedent to Mario Paint, only harder to use and not as fun. Both of these games were fairly clunky, and it would take considerable effort to actually draw something, but they did technically fill an otherwise neglected niche. Their third and last game in the series is another story altogether.

In an attempt to appeal to that untapped market of 3 to 6 year olds, Color a Dinosaur delivers exactly what it says on the box; you color dinosaurs, and that’s pretty much it. Now, at first blush, this type of game might seem like an unfairly easy target for an ostensibly hardcore gaming website to pick on, but on a conceptual level, the idea of a game like this isn’t altogether terrible. After all, coloring is a pretty good activity for keeping small kids entertained, and hey, dinosaurs are pretty rad, so if you’re gonna to be coloring something, why not? The trouble with this game (some of which can be blamed on the limitations of the NES) is that, even when judging it on its own terms, it’s not a very good coloring book.

Once past the title screen, you’re presented with the dinosaur select screen, where you can choose from one of 16 different cartoon dinosaurs to color. When choosing your dinosaur, whether you press the A or B button will determine whether you use a free-roaming cursor, or one that jumps automatically to different points on the picture, though both are clunky in their own special ways. Pressing A colors whatever selection the cursor is pointing to, and B selects which color or pattern you’ll use. Select allows you to cycle through the games 8 color palettes, though half of these are just the same palettes wherein one of the colors is constantly changing. The start button takes you back to the dinosaur select screen.

Each palette has 3 colors to choose from, and yes, you just read that correctly; three colors. The rest of the choices in the palette are just patterns comprised of the three original colors. When you switch palettes, all the colors on the screen switch over, so you can’t actually mix colors from different palettes, though you technically can mix and match patterns from different palettes. When you do choose to color in a certain area, the color doesn’t fill in all at once, but instead goes through an elaborate (and depending on the size of the area being colored, a painstakingly slow) sequence.

The dinosaur drawings themselves are kind of cute, and the music, by none other than Tommy Tallarico, is at least catchy, though there isn’t a lot of it, so it does grate a bit after a while, and the interface is simple enough that you could reasonably expect a small child to handle it. The problem? With 16 pictures, and 4 palettes of 3 colors each and no save feature, the game stacks up fairly poorly when compared to the much cheaper option of just buying an actual coloring book and a box of crayons.