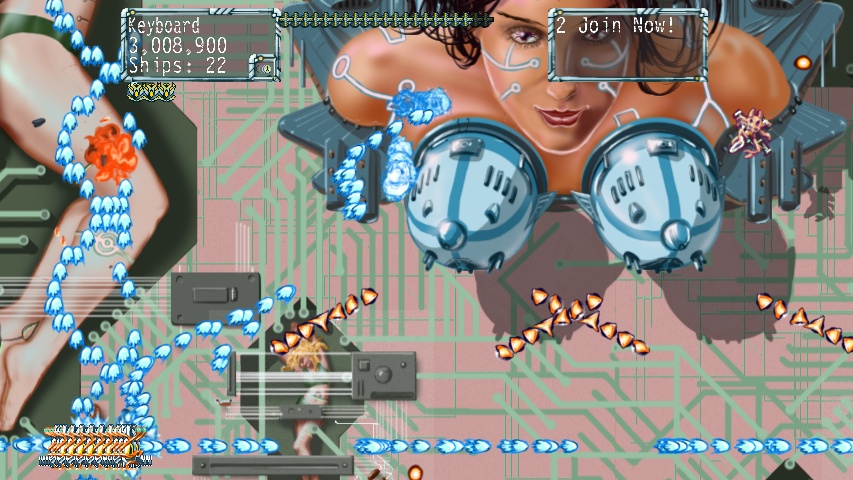 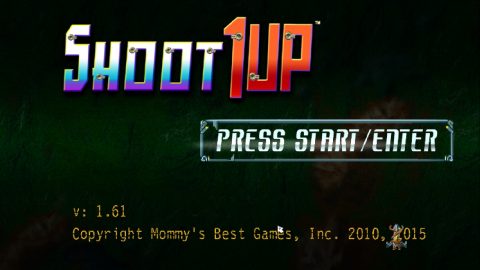 Shoot1up is a self-described “manic shooter for normal gamers”, although it isn’t quite a bullet hell game. It is, however, a surprisingly well developed game with some very compelling core mechanics. For anyone familiar with it, it’s most well known for the gigantic woman robot shooting missiles out of its nipples, a testament to the “why the hell not, we don’t have suits to impress” mentality of independent game development.

In Shoot1up, you don’t control a single ship, but rather a whole squadron of them, with each counting as a life. (The in-game terminology is “phalanx”.) You can expand and contract your phalanx with the L and R triggers. Spreading out your ships will not only earn higher points, but will also trigger a laser in the center if the formation is wide enough. Of course, in doing so, you’re also more exposed to danger, turning it into clever risk/reward mechanic. If you lay off the trigger for a moment, a small circular shield will also form around your ships. If you lure an enemy close enough and press the trigger, it’ll cause the shield to dissipate but kill the enemy in the process, awarding 10x the standard point value. Obviously, waiting for it to charge and then getting close is even more dangerous, but is really the only way to score big.

Like many modern shooters, the goal is to reach the end of the game on a single credit. (You aren’t allowed to credit feed, at all – once your ships are all gone, it’s Game Over.) In general, dying isn’t something you need to precisely avoid. In fact, when you’re controlling twenty ships on the screen at the same time, it’s almost impossible to get through completely unscathed. You can make a series of mistakes and wipe out a huge chunk of your squadron, but with some smart flying, you can eventually rebuild them. In other words, it takes more than a few misjudged bullets or mistimed maneuvers to put an end to your game, and more how you deal with the general flow of gaining or losing power. While it can get hairy in the later levels, it’s not a terribly difficult game on the Normal setting, and with a few games you can probably get skilled enough to reach the end without much of a problem, and can then concentrate on score.

Shoot1up is a great little game, one that distills the better parts of modern shooter design without backing itself into a corner than only a few can master. Its only major issue is that, as a vertical shooter that uses the full 16:9 widescreen aspect ratio, the camera is zoomed in too closely, making it feels claustrophobic. The original XBLIG release lacked scoreboard support, but this has been added to the Steam version, along with achievements.