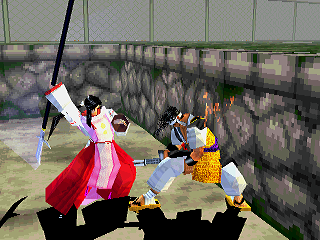 Though short-lived and long dead, the Bushido Blade series remains relevant, a rare phenomenon among fighting games. This is mostly due to its concept: it aims for realistic weapon-based fighting. As obvious an idea as it seems, it has remained oddly underexploited to this day.

Another draw is the “Bushido”-inspired setting. Ancient Japan, samurai and their code of honor have long been objects of fascination, but no other videogame has approached them as this series does, with seriousness but not the dryness of historical accuracy. In fact, it’s hard to place it within a specific time period; they have things like helicopter landing pads and foreigners with modern firearms, yet their characters dress and think as if in feudal Japan. In truth, they aren’t samurai, but assassins belonging to secret societies. 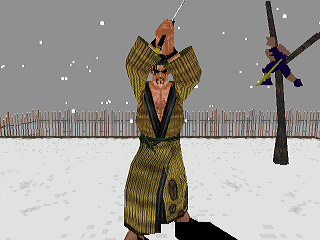 Like Dream Factory (Tobal, Ehrgeiz), developer Light Weight was set up with Square’s help and largely consisted of former Namco and Sega staff, with Virtua Fighter / Tekken character designer Kunihiko Nakata at its center. The Bushido Blade duology were both their first games and their finest moment.

By 1997, combos were already a major aspect of the VS fighter genre, and it seemed as if they would only grow longer and more impressive as time went on. To balance things out, the power of individual moves had to be gradually reduced, so that in combo-heavy games, single hits became essentially meaningless. Bushido Blade went in the opposite direction, and there lies its appeal: this is a fighting game in which a single hit can kill.

There are attack buttons, which hit High, Mid or Low. Short attack chains of 2 or 3 hits can be performed, along with individual moves with a longer reach. For every weapon, there are three stances, which determine what moves can be performed. Typically it is safest to match the opponent’s, however a riskier stance may provide a great offensive advantage. Switching between them is somewhat cumbersome, with separate buttons to raise or lower your stance; likewise, jumping is weirdly complicated, involving three button presses, which is mitigated by the fact that it isn’t very useful, unless you include the potentially fatal pounces on downed opponents. 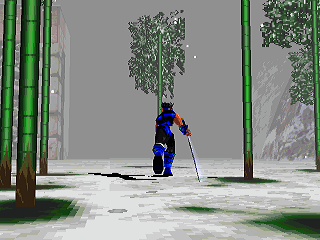 Unless your current stance leaves you wide open, a single hit to the head or body will usually clash against the opponent’s weapon by default; in order to score a fatal hit, one must either strike at the right moment ? right after dodging or parrying the opponent’s attack, for example ? or perform an attack chain that will first move his or her weapon out of the way, then hit the newly-exposed spot. As one character puts it in one of his endings, swordsmanship is about timing, not power. Another tactic is to maim the enemy, so as to impair their capacity for fighting. A clean hit to the legs will bring them down on one knee, limiting their movements and leaving their head exposed to overhead attacks. A fighter in this position has a variety of offensive options nonetheless, including a desperate lunge that can prove deadly. Injuring the opponent’s arms slows and weakens them, on top of stopping them from using certain moves requiring two hands. Similarly, each character has a sub-weapon, which can also be thrown; the weaker types are used to create an opening, while others are heavy enough to kill on their own. Once they hit the ground, either fighter can pick them up to throw them again. 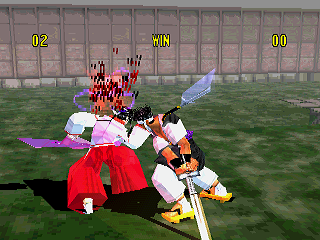 What’s more confusing, at least in the first game, is the defensive aspect. Rather than a standard block, you get a sort of timing-based parry, but it’s efficiency depends on the weight and power of both weapons involved, as well as the fighters’ stances. Depending on all these factors, you may perform a proper block, leaving you with a slight advantage, or be left staggering and open to further attacks. To make up for this, you can perform a backwards roll whenever you block or get wounded, so as to get out of range. You can also dodge many moves with side-steps and back-dashes, but these movements are a little slow.

Bushido Blade is also an early arena fighter; by holding L1, you can run freely around the large areas you battle in, climb to a higher plateau, hide behind trees for protection or throw snow at the enemy’s eyes to blind them. Of course, running attacks are also a valuable tool at your disposal. 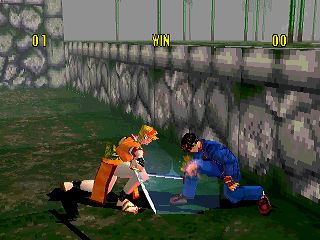 There are only six characters in the main roster, but the eight weapons provide as many fighting styles. The Long Sword and Saber are the fastest and shortest blades. They’re both one-handed, so there’s no penalty for using them with a wounded arm. The Rapier is similar, but used for stabbing rather than slashing. This elongates its range of attacks, but the lightness of its blade makes it nearly useless for parrying. The Katana is the standard weapon, well-balanced in every area. The Nodachi resembles a long Katana with a more pronounced curve in the blade; great range, but slow. The Sledgehammer is the heaviest and most sluggish, though it also allows for quick and deadly attacks to the head. It is better avoided than parried. The Broadsword, nearly as slow and heavy, is a good defensive weapon. Finally, the Naginata is very long, keeping the opponent at bay, but its moves leave its user open longer and more often than any other weapon.

In addition to varying stats, each character tends to favor a particular weapon (or two); they wield them with more speed or power and usually gain a few extra special moves. The game doesn’t really tell you this; at the time, you would’ve had to read the manual or experiment to find who’s good with what. Today, you’ll probably run to a FAQ. 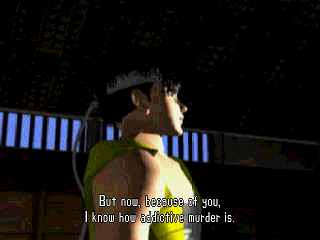 This is also one of the best-looking PlayStation titles; areas like the snow-covered fields and forests or the beach at sunset retain a certain beauty despite the outdated technology, and the character models are detailed and stylish in their VS mode outfits. For some reason, their Story mode attires are a lot goofier.

While 2-player VS. is the heart and soul of any fighting game, Bushido Blade’s single-player modes are worthy of mention. Slash mode works as a nice little side-game of its own, teaching you how to deal with specific stances and attacks, as you fight 100 ninjas whose patterns change with every group of 10. In the original version, it was known as Chambara mode; Chambara is the name given to sword-fighting movies in Japan. Practice mode lets you fight continuously against a CPU-controlled opponent using a bamboo sword, though you’ll have to go back to the manual (or the Internet) for a movelist.

And, of course, there’s the Story mode. This mode introduces the Narukagami Shinto, an ancient school of martial arts that hides a secret; it is really a cover for a band of assassins known as the Kage. Its members are sworn to secrecy and cannot leave the Meikyokan dojo of their own volition. Recent events revolving around a leadership upset and the massacre of an Okinawan village have convinced whoever you pick to do so, forcing their co-disciples to go after them. The details of the plot remain vague, as the narrative is limited to short, cryptic conversations between battles, but the tone is surprisingly dark and tragic. Tatsumi, a mere teenager, kills his comrades in order to survive, only to come to realize that he enjoys the slaughter; Black Lotus, an Irishman who’s moved to Japan to live according to the Bushido, ends up committing suicide. 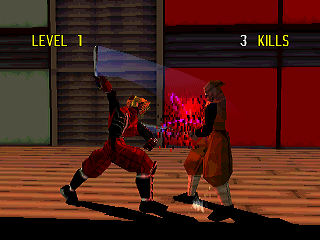 This is because the “good” endings are hidden and reaching them involves a complicated method you’re unlikely to stumble upon on your own, though it ultimately makes sense within the story; suffice to say that in this mode, the fighting areas are interconnected, and the playable character’s true goal is to escape the compound, not kill his or her comrades. To enhance the realistic atmosphere, there is practically no music during battle, only ambient sounds. Even on the default path, you must fight honorably; underhanded tactics, such as throwing elements at the enemy’s eyes or hitting them in the back, are disqualifying, as is attacking before they’re finished talking. Adhering to this code opens the way to the four bosses, one of which, the gunslinger Katze, can be unlocked with some difficulty.

There’s even a P.O.V. Mode. It’s more novel experiment than solid alternative, though it does look cool at the very least. The developers must have believed in it, though, because they made a Link mode for it; all you’d need is two TVs, two PlayStations, two copies of Bushido Blade, two controllers and a Link cable, and you and a friend could have at it in clumsy first-person glory.

As an aside, the game was made slightly more violent in its overseas releases; the blood that splashes when a warrior is killed was only a spark of light in the Japanese version. Another interesting piece of trivia is that the actors used for the motion capture belong to the Japan Action Club, a martial arts / stunts school created in the 1970’s by popular actor Shin’ichi “Sonny” Chiba, who starred in dozens of samurai and ninja movies and TV series. Coincidentally, one of those movies was titled The Bushido Blade, though it was released almost 20 years earlier and has nothing to do with the games.