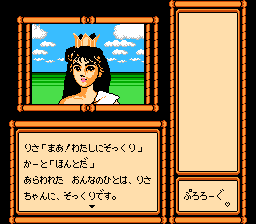 This FDS adventure game, translated as “Risa’s Fairy Legend”, stars idol Risa Tachibana, who was a famous pop singer and actress in the late 80s. You play as yourself, a huge fan of Ms. Tachibana’s, attending one of her concerts. All of a sudden, the two of you are transported to a fantasy dimension. You now must explore the world so you can find the Harp of Peace, the Sword of Justice, and Gem of Love, all in order to defeat the evil Witch of Darkness, Delira and return home. Along the way, you’ll run into situations and meet characters from assorted fairy tales and myths, like the Matchstick Girl, The Honest Woodsman, Hansel and Gretel, Tarou Urashima, Medusa, The Little Mermaid, Cinderella, and others. The game also shares the name of a song released a few months prior. Oddly, this uses a blue disk card, but doesn’t use the fax system. 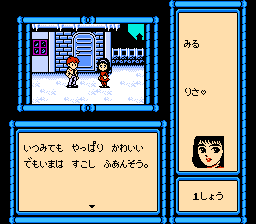 As far as Famicom adventure games go, this one’s not too bad. The premise is ridiculous, and the reverence with which it treats its heroine – there’s even a heart by her name – is simultaneously embarrassing and endearing. Still, per usual Konami standards, the art is attractive and the soundtrack is great. It even uses the same screen-warping transition effect as the NES MacVenture games, like Deja Vu and Shadowgate.