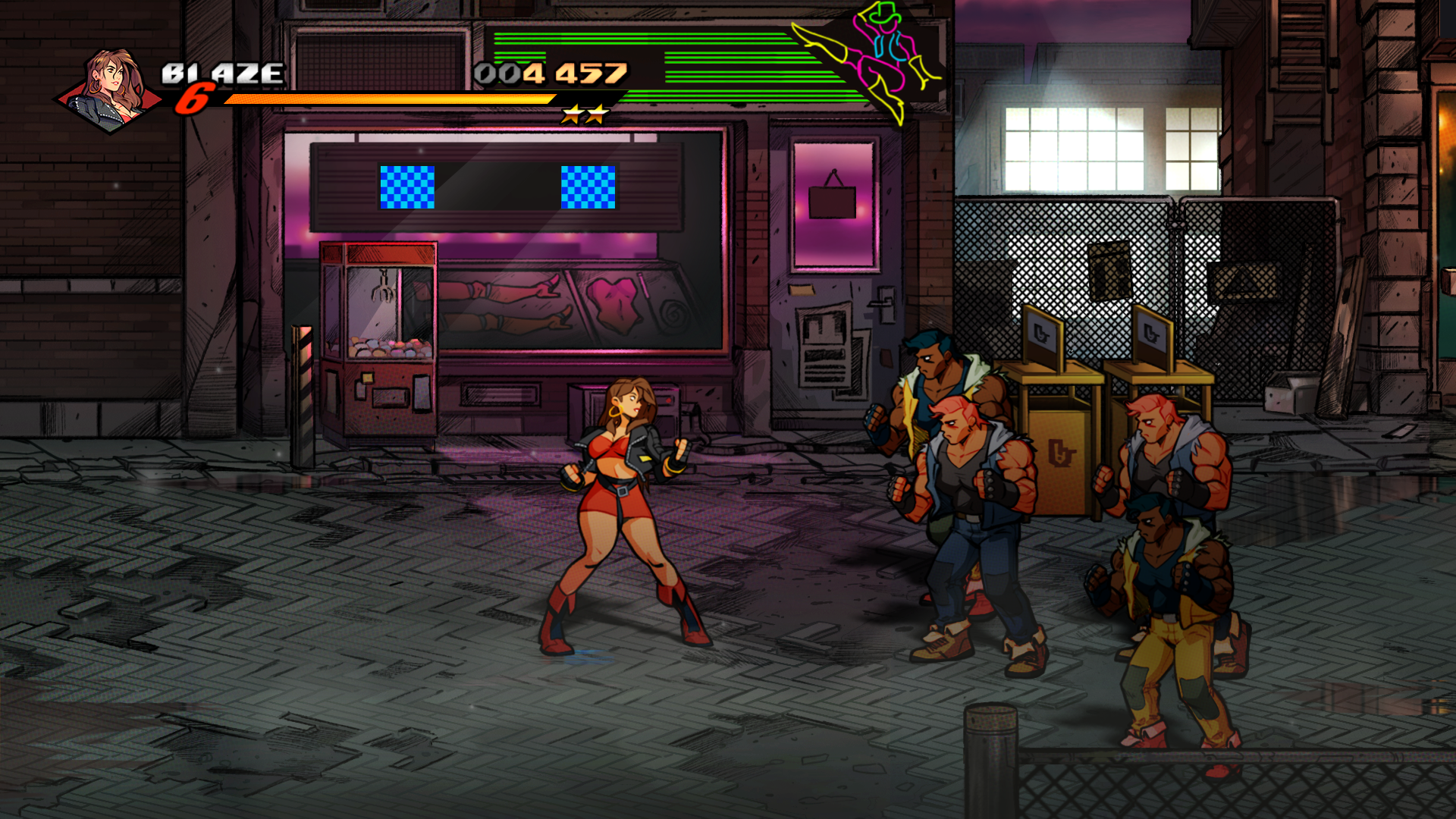 There were several attempts at a fourth Streets of Rage game – one that ended up becoming Eidos’ Fighting Force, one pitched by Ancient and Yuzo Koshiro, and some concept art by Swedish studio GRIN (Bionic Commando Rearmed) – but none of these attempts came to fruition. However, in the late 2010s, Sega began working with outside studios to resurrect some of their legacy IPs. This finally resulted in a proper Streets of Rage 4, released in 2020, over twenty years after the last game on the Genesis. It was co-developed by Guard Crush Games, previously of the excellent indie beat-em-up Streets of Fury, with visuals from Lizardcube, who worked on the Wonder Boy: The Dragon’s Trap remake from a few years prior.

A significant amount of time has passed in the world of Streets of Rage (though not as much as in the real world). Axel and Blaze have left the force again, but a new threat has descended upon Wood Oak City, in the form of hypnotic music. Mr. X is long gone, but his two children (Mr. Y and Ms. Y) have taken up his evil mantle, and are not-so-secret behind the conspiracy. The two old heroes gear up to fight back, along with Cherry (Adam’s daughter, basically acting as a Skate replacement) and Floyd (a hulking guy with robotic limbs similar to Dr. Zan). Partway through the game, Adam also shows up, making his first playable appearance since the original Streets of Rage. 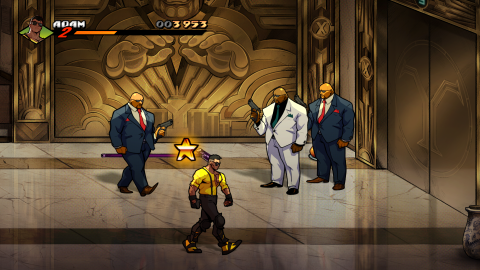 The visuals are now high definition, similar to the aforementioned The Dragon’s Trap remake, and it looks marvelous. The style is a perfect evolution of the 16-bit games, with a colorful comic book look that still maintains the original’s grittiness. Any individual screenshot looks like a work of art, particularly the meticulously detailed backgrounds, but it’s also a fully animated video game – imagine sending this to the 1990s and telling the kids back then that this is the kind of beat-em-up you’d be playing in 2020. (Some background graffiti jokingly demands “Where are my pixels?”) There are familiar beat-em-up stages like bars, rooftops, and back alleys, while Streets of Rage 4 will also send you through art galleries and airports. And opulent skyscraper mansions are a thing of the past, as the ultimate baddies have used their ill-gotten wealth to use an entire castle as their stronghold.

A large number of composers contributed to the soundtrack, with returning highlighter Yuzo Koshiro providing a handful of tracks, primarily the opening themes and the final boss fights. Unsurprisingly, these sound the most like the first two 16-bit games. Boss themes were handled by a variety of musicians, both Eastern and Western, including Yoko Shimomura (Legend of Mana, Kingdom Hearts), Keiji Yamagishi (Ninja Gaiden), and Harumi Fujita (many Capcom games), as well as Motohiro Kawashima, the co-composer of the 16-bit Streets of Rage games; also contributing are Das Mortal, Scattle, and XL Middleton, who provide a number of synthwave tracks.

However, a bulk of the soundtrack was Olivier Deriviere (Remember Me), and did most of the level themes. Rather than the single looping tracks in most 16-bit games, the track flows and evolves as you play though areas of the stage. These pieces might not make much of an impression on the first playthrough, but when you replay them or listen to the music on their own, they begin to sync up, so when a certain part of the track hits, your mind goes “oh, this is when the cells open and the bad guys leap out to attack”. Dynamic music is rarely used in these types of games, but it’s used very effectively here. 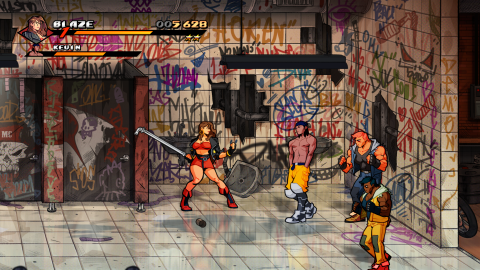 The older games were heavily influenced by dance music of the time, but rather than keeping with that now-retro feel, much of the soundtrack updates it to sound like modern, 21st century club music. The end result sounds much different, and while it’s nice to dream what an entire soundtrack from Koshiro and Kawashima would sound like, particularly using more modern synth, it still sounds absolutely brilliant. There’s also a retro soundtrack consisting of songs from the first two games, both the Genesis and Game Gear renditions.

As for how the game plays, it’s most close to Streets of Rage 2, albeit a little punchier due to the emphasis on juggling and combos. Beyond the special move, attack and jump moves, a fourth button is used for picking up items and throwing weapons, a utility which isn’t strictly necessary but is very welcome. Not all of the characters can run/dash anymore though, so it’s not quite as fast as Streets of Rage 3. Instead, those moves are only given to specific characters (Cherry can run, Adam can sidestep horizontally) in order to give them more individuality. For the most part, this works – however, there are certain enemies that use powerful attacks that either have very short wind-ups or cannot be hit out of them while they’re charging them – without any quick way to avoid these, you really need to approach these characters carefully.

There’s a wide variety of enemies too – the same Y. Signals and Galcias as the old games of course, but there are also cops with recharging riot shields, long-haired punks which have devastating spinning kicks, stout helmet-wearing rockers with a powerful charging dash, robot fighters that can magnetically attract metal items on the screen, karate fighters with counter moves, bad guys that chuck vials filled with poison, fire, or electricity, and plenty of others. Many are introduced through the levels as the game progresses, and challenge you to fight different combinations of them, so your skills are always being put to the test. While the “Galcia with a knife” character first appeared in Streets of Rage 2, here he’s almost comically overpowered, a threat that needs to be dealt with immediately before taking on any other foe. Hilariously, in the Chinatown level, he can also pick up gigantic spears, which makes him even more of a threat. A nice touch is Estel, a recurring antagonist who’s a police officer, and can summon a cop car to bombard the screen with explosives, a callback to the skill from the first game. 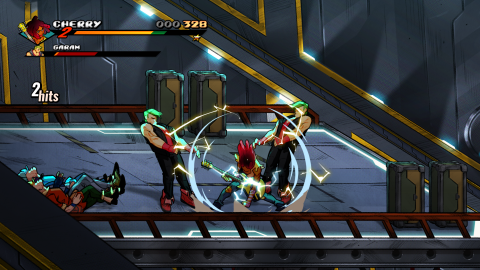 The special move system has been changed too; when you execute one, you’ll temporarily lose some health, which you’ll gain back after landing a few hits. However, if you get smacked by an enemy, then you’ll lose that bit of health. It promotes using special attacks regularly while still requiring that you don’t play too sloppily, encouraging a healthy mix of offense and defense. There are also new “star” moves, which can used based on how many hidden star icons you can find throughout the stage. These aren’t quite as powerful as the “cop car” moves from the first game, but they’re also more suitable for crowd control than your other special attacks.

There are twelve stages altogether, making it significantly longer than the 16-games, which capped out at eight levels. Beyond its aesthetics, the Streets of Rage series was so well regarded because they were made for the console audience, and so it wasn’t as brutally difficult as its arcade counterparts often were. Streets of Rage 4 evolves this by drastically changing its balance. With the 16-bit games, you were given a handful of lives and continues, and were expected to make it all the way to the end. In Streets of Rage 4, your life count and score reset at every stage, and running out of lives while require restarting the levels; this then divides the game into twelve smaller challenges instead of one large one. With this focus, enemy attacks are much more powerful, and you’re more often threatened with losing lives. However, restoratives are also placed more regularly, so you can always keep yourself as full health stock, if you’ve played well enough. Most bosses also have at least one health restorative, which you can save until you need it, providing you can make your way to that part of the screen before getting knocked out. However, once you’ve beaten the main mode, you can unlock an Arcade mode, which requires that you beat the whole game on one credit in a single run.

Combos will provide extra points the longer you can string them along; however, if you get hit, you lose the entire bonus, so it’s always a risk/reward balance to attempt to hit it higher. Not only will this grant extra lives, but your score is added to a global points total, which can then unlock retro versions of the characters. The chunky sprites look hilariously out of the rest of the game, but they all play like how they did in the old days, often with enormous power to compensate for their smaller moveset. (The gang from the first Streets of Rage also gets the screen-clearing cop car move.) In the initial version of the game, Max and Shiva appear in the game as bosses, and only their old school sprite versions are unlockable; Roo pops up in the background of a bar but is only playable in his retro form in the DLC. There are also hidden retro-style arenas based on the old games, unlocked by using a taser on the arcade cabinets found throughout the levels. 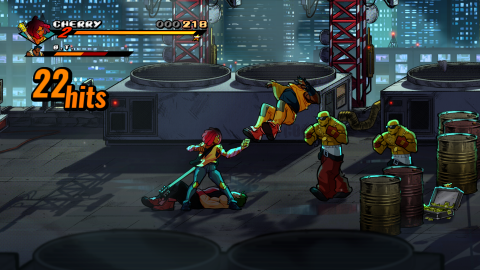 Mechanically there’s very little of this that’s actually new, as these are aspects that have long existed as part of the beat-em-up DNA, but here they’re skillfully implemented by the folks at Guard Crush, who shown extraordinary expertise in the genre. Indeed, Streets of Rage 4 doesn’t just want to be old school throwback game – it’s something that not only looks and sounds modern, but polishes up 1990s game mechanics with decades of design hindsight; it’s a game that’s welcoming to newcomers, particularly with the easier difficulty modes, but also something with veteran players can appreciate. It hits pretty much every mark of a high quality beat-em-up – it’s no understatement that this is one of the best in the genre.

This package was bolstered further by the Mr. X Nightmare DLC, released in 2021. This includes three new characters, all bosses in the original release – Max, Estel, and Shiva. Max is still a powerhouse but he’s faster than Floyd, largely thanks to a sliding kick move. Estel is super fun, with a special move where she leaps across the screen, grabs an enemy, and pummels them on the ground, as well as a grenade toss. And Shiva is incredibly flexible when it comes to combos, but his body is such a powerhouse he refuses to use weapons.

Additionally, there’s an extensive survival mode where you enter a simulation based on Mr. X’s memories, structured similar to a rogue-like. Each stage is a randomly generated arena, filled with a variety of enemies and weapons. When you beat one, you’re offered a perk that lasts for the rest of the run. Some of these add elemental attacks to your hits, some increase strength but restrict another ability in some way, and so forth. You only get a single life, and points will unlock extra stars. When you die, your points are used to unlock extra customizable moves for your character, which can be used in any other mode. There are quite a lot of new backgrounds here, including some retro-style arenas, along with a ton of new music composed by Tee Lopes (Sonic Mania). There’s also some new weapons (some of which are quite silly) and added difficulty levels. The DLC would’ve been worth it just for the extra characters, but along with the survival mode and extra moves for all of the characters, it further improves what was already a brilliant game.