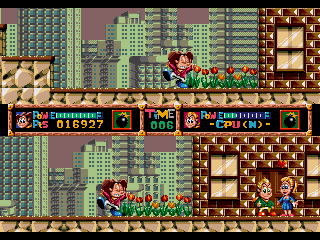 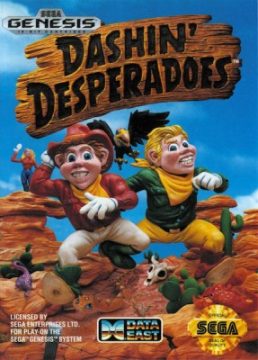 The same year as Spinmaster, Data East would release another game using the same characters. It’s kind of strange they didn’t just try to port Spinmaster to the Genesis, given that the hardware could have probably handled it with some cuts. What we got instead was something entirely different, although it’s still worth playing if you’ve got a good friend around to play it with. Much like Mario Kart, this is a game where the AI is best avoided as much as possible.

It’s not entirely clear if Dashin’ Desperadoes is supposed to be a prequel, sequel, or something removed from Spinmaster entirely. They both share the same main characters, although Totally Not Dr. Wily doesn’t make a second appearance. Johnny and Tom are now known as Will and Rick, while their girlfriend now goes by the name of Jenny. Will and Rick are both trying to win the affection of Jenny, who seems perfectly happy to exploit their rivalry for her own personal gain. It’s a tragic, almost Shakesperian tale of a lost friendship and the woman who destroyed it, and the depths two men will sink themselves to for a woman’s love. Or something.

Dashin’ Desperadoes is basically best described as a cross between a platformer and a racing game. At the beginning of most stages, Jenny will beckon Will and Rick over to her, and the first person to reach her wins. If you reach her first, you’ll move on to the next stage, but if Rick gets to her, you’ll have to spend a credit to try again. It’s an interesting concept, although it’s one that isn’t really as fun when you’re playing against an AI opponent. It doesn’t help that the game is set up as a split screen even in the one player mode, so while you can see what Rick’s doing, it doesn’t really help you to see what you’re doing, at times.

All the levels are generally pretty short and linear, which makes sense for a game about racing. Every world generally has its own obstacles, like doors that open up to hit you in the face, quicksand, and spikes. There’s also random wildlife like dogs and sharks, which can’t be killed, but can be jumped on to send them off in a random direction. The game does a pretty good job of giving a lot of alternate paths, so there are plenty of shortcuts you can take if you know what you’re doing. Much like Sonic, the upper path is generally clearer, while the bottom path tends to have more obstacles. The higher paths also generally have more powerups, so you’ll find more stuff like speed boosts and invincibility. One bad jump can send you right to the lower path, though, so watch where you jump.

Some levels also have some unique features you can use to your advantage, if you’re good enough. One of the beach stages, for example, has a boat you can ride on, at the risk of being a sitting duck for seagulls, not to mention the other player. If you can stay on, however, it’ll let you move a lot quicker than it would through the water below, which cuts into your movement speed pretty hard. There’s also things like skateboards and surfboards you can jump on for a boost of speed, although if you’re not careful, you’ll ride right into something and get knocked over, giving your opponent the perfect opportunity to steal it and ride off. This is the sort of game where victory is best achieved by screwing over the other guy as much as possible.

Given the arc you throw weapons at, and the size of the screen, it’s not always easy to actually hit your opponent with the weapons. Not that the AI seems to have any trouble at it. You can also hold down the A button to roll, which gives you a speed boost and can trip your opponent if you hit them with it. You can only roll for so long, though, shown by your energy meter. Energy slowly recharges when you aren’t rolling, or you can pick up chicken for a full boost. You can also sweep kick by pressing down, which is also good for tripping your opponent.

Unlike Spinmaster, Dashin’ Desperadoes is a genuinely hard game, mostly due to the AI. While it’s not quite as cheap or as omnipotent as your average Mario Kart game, it still feels like the AI’s playing on a level far beyond you. It still makes mistakes from time to time, but it’ll usually capitalize on any hits you take to roll right past you. Either that or it’ll land enough lucky hits on you once it falls behind that it catches up anyway. You’re generally only allowed a few mistakes before the AI gets too far ahead to catch up, short of an amazing comeback from your end. Given that you only get three continues to start, and don’t earn that many afterwards, you can see how this might be an issue. There aren’t any passwords, either, so you’re expected to clear all six worlds, which totals up to about 18 levels, in one run.

The first two stages of each world are races, both of which involve getting to Jenny before Rick does. In the third stage of each world, Rick decides to just forget about the racing thing entirely and just kidnap Jenny, because Rick is kind of an asshole. All the bosses involve Rick moving forward in a vehicle of some sort, with you having to blow it up before he reaches the end of the course. These aren’t ever generally as hard as the races, since Rick is a little more predictable in his attacks. There’s also only three different bosses, with the first three repeating once you reach the fourth world. Oddly enough, despite the fact that Jenny gets kidnapped by Rick no less than six times, she still seems perfectly to see him if he wins a race. Maybe the whole race thing is some kind of BDSM thing. 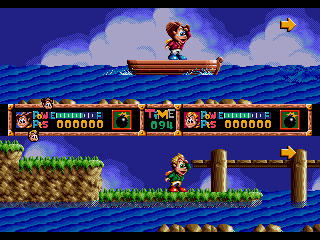 The game is really meant to be played in two player mode, given how much content there is you won’t see in the one player game at all. You get the same six worlds that you play through in the one player game, but they all have new levels. One is a race to the end of the stage borrowed from the one player mode. Each world also has a second, longer race where you have to get an item at the end of the stage, and THEN bring it back to Jenny, who’s waiting at the beginning of the stage. Instead of a boss stage, which wouldn’t work as well with two players, every world has a challenge involving stomping on ten enemies before the other player can.

There are also a couple of secret minigames, accessed by putting in passwords at the main menu. One involves jumping across clouds for as long as you can until you fall, while the other is about dodging rocks and other things that fall from the sky. Neither of them are very fun, and they’re both too hard to really play for long, but they’re a nice extra feature.

Dashin’ Desperadoes has the same bright, toony art style that Spinmaster has, although it doesn’t look quite as good on the Genesis’s more muted color pallete. There are quite a few animations for getting hit, like getting burned, squashed, frozen, shocked, or just knocked over, so that’s a nice bit of extra detail. The music is generally pretty good, although there aren’t many tracks that really stand out. There’s also quite a bit of digitized speech, most of it being Jenny’s constant demands for you to bring her things. Bit of a gold digger, that one. 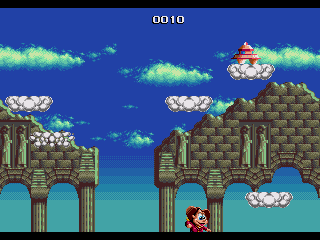 Dashin’ Desperadoes is a game that’s best played with a friend, because that’s where the game shines most of all. If you have a friend to play with, that’s where Dashin’ Desperadoes really shines. The game would end up forgotten, and the ‘on-foot racing’ genre would eventually move on with games like Sonic R and Runnin’ Wild, neither of which really endeared themselves to the gaming public, either. Still, if you’re looking for a good competitive game on the Genesis that isn’t Street Fighter or Mortal Kombat, it’s worth looking into.

The game never got a release outside of the US, although Data East must have seriously been considering it. If you switch an emulator to a Japanese region console and load the prototype of Dashin’ Desperadoes, the game’s name will change to Rumble Kids. Who knows why it didn’t get a release over there. Maybe they figured the game was too Western for Japanese audiences.