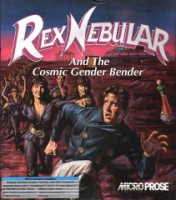 “Rex: LOG ON. Ah, there we go! This is Rex Nebular, making his first official log entry, aboard the fastest, stealthiest ship in the galaxy, The Slippery Pig. Yes siree, this log is a GREAT idea! I’m gonna make an entry every single day! This will become the definitive record of my life! Yes siree, I’m not gonna miss a day! Anyway, not much happened today. Oh, spilled some coffee onto the Theama Wave’s 47-prong bedistor board… must remember to order a replacement. LOG OFF. Okay, where’s my dram bedistor board mailorder data”

“Rex: LOG ON. Oh, nut’s the battery must be – Aha! It still works! Wow! Guess what I just found in the back of my sock drawer! That self-transcribing log I bought last year! What a gas! I’ll have to start keeping my log again! Let me clip it right here on my belt so I won’t forget about it. *snapping noise* There. LOG OFF. Now let’s see… is it a boxer day or a jockey d”

“Rex: LOG ON. Couldn’t figure out why my tri-vee set was on the fritz, so I disassembled it and found this log wedged in the antenna control arm. Drammed if I know how it got there. But I figured I might as well make an entry, as long as I’ve got it out. Things have been pretty quiet lately. Too quiet. Haven’t had a job since that Flatulus thing. I can barely even afford to see any babes, given what lavish tastes they all have. But man, have I ever met a dame worth going into debt for! Wait, what’d I do with her picture? Ah, here it is! Take a look: *Activating scanning Accessory*” 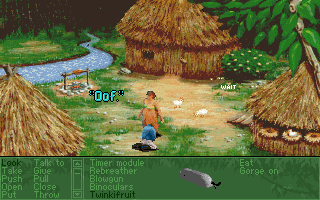 “Rex: Hot stuff, eh? Her name’s Lolita. Sigh. But if I don’t get a nibble soon, there are about five banks and ten bookies who are gonna be out for my hide. No, make that twelve bookies. No, make that…” *loud metallic clanking noise* Hey, there’s my mail capsule! Probably just the usual junk. Let’s see… Yup. Junk. Junk. A bill. Junk. A bill. Hmmm… what’s this. *tearing noise, paper* “Rex Nebular, Single Hypership ASAP-49-Q…” Yeah, yeah… “Rex, you old fraud! I’ve got a job for you! C’mon over and I’ll fill you in! Gorcho.” Oh, no, not that windbag! He hasn’t got a galactar to his name! Wait, what’s this… “P.S. Enclosed is a check for an advance of 10,000 galactars.” Holy Shrag! Yee-hah! All right! Telephone, I want 89-9055-6712. Oops, that log thing is still running, isn’t it? LOG OFF. Hello, my little parsimmon! Get on your fanciest duds! We’re gonna paint the tow”

LOG ON. What you just read were a few excerpts from Rex Nebular’s ‘Voice-Activated Auto-Transcribing Audio Log’, a 22-pages strong booklet of flavor text shipped with the game, written by no one less than Steve Meretzky, of Infocom and Legend Entertainment fame. These entries show best what Rex Nebular is supposed to be: science-fiction comedy with some slight soft erotic touches, that doesn’t even try to hide the fact that its basic concept is “Space Quest meets Leisure Suit Larry“. Too bad there were no adventure game veterans of Meretzky’s caliber working on the actual game (MicroProse was much more well known for their strategy games, although they did do a few other adventures like Return of the Phantom and Dragonsphere), so this booklet essentially remains the funniest part of the whole product. For example, the idea of Rex’s audio log always shutting off a few seconds too late is ingenious, but the game doesn’t take it anywhere. It also doesn’t do anything with the characters introduced other than Rex himself and Stone, his current employer. Of all other characters, only Lolita is barely mentioned a few times. LOG OFF. Damn, she looked pretty hot on the pi 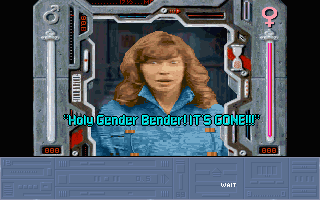 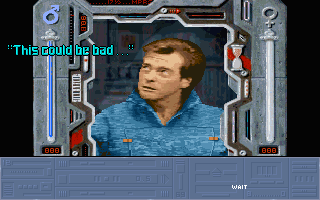 LOG ON. Instead, the Cosmic Gender Bender simply tells the story of the latest contract job Rex takes to save himself from his chronically broke status. A filthy rich guy named Colonel Stone (the guy’s got his own private moon) asks him to retrieve a vase incredibly precious to him. It’s 75,000 galactars precious, so Rex doesn’t hesitate a second, and is on his way to the lost planet Terra Androgena, that’s supposed to hold the vase. But things go wrong as Rex is attacked by a giant space ship entirely manned… er, womanned by hot females. Rex’s attempts to talk himself out of the situation fail, and he has to crash land into a lake on the surface. LOG OFF. Now, where were the pictures from the intro? Ah, yes, here at the end of the arti

LOG ON. Soon after Rex gets out of his crashed vehicle, he learns that the planet is an environment extremely hostile to his kind: it’s populated exclusively by women! As we find out, the male population got wiped out in what is called the Great Gender War a hundred and fifty years ago. Not only that, the biological weapon used to defeat them made the women also incapable of bearing male children, so they have to resort to some tricks to sustain their population. There are. in fact. two factions of women. The “Keepers” have access to high technology (they’re who shot down Rex’s ship in the first place), one of which is the “Cosmic Gender Bender”. They use this to temporarily transform themselves into fake men to fool and impregnate the “Stock”, tribes of women living in the wilderness. Of course, the Keepers hate being men just as much as the Stock hates being abused by transmorphs, so everyone is looking out for “real” men from outer space to have him mass raped, and who could be a more manly man than Rex? LOG OFF. Zapp Brannigan, of course. And m 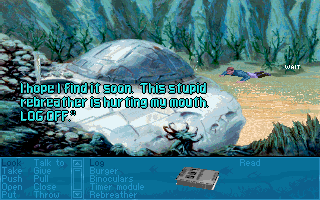 LOG ON. So in his search for the vase, Rex not only has to avoid the industrialization of his testicles, find another working space ship, and generally avoid dying, he is also forced to use the Gender Bender on himself multiple times to proceed. Only as a woman he can safely wander around the Keeper’s base, even more so because of the security systems than just to interact with its inhabitants. And then Machopolis, the former capital of the men, awaits him, as of course only men would keep useless stuff like the vase in an art collection. As you can see, most of the game’s plot revolves around gender stereotypes. Most women are sexy, only the fat ones are cannibals and they used baby powder to fight the war, while all men are (or have been) filthy, lazy good-for-nothings who identify their gender by crotch-scan. LOG OFF. Just like in real life! Man, this is the most realistic 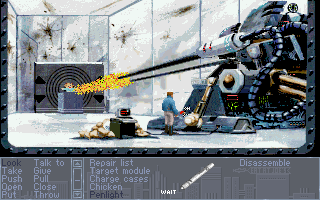 LOG ON. Rex Nebular works a bit differently than most adventure games. It barely holds your hand, and your objectives are always very general. Escape from the base, get to Machopolis, find the vase. The solutions to the puzzles themselves is never as tricky as in the early Sierra or Lucasarts games, but rather quite logical for what one would do with the items and the situation given. For example, you find a blowgun and poisoned arrows in a hut. One screen further, you’re attacked by an ape who steals another important item from you and escapes up a tree. Hmm, what do you do? This style makes especially the first part of the game really easy, and you can just breeze through it, as soon as you find the right hotspots. This is not always as simple as it sounds, since most are quite inconspicuous visually, and by the default setting, the game only displays hotspots when clicking on them. This lends itself to two kinds of player behaviour – either one plays it straight and devotes his life to pixel hunting, or one just keeps the mouse button pressed all the time. Most players would want to change to the “easy” interface, which works just like it should, displaying hotspots as you hover over them. LOG OFF. Jesus, were the two hours of aimless wandering among the first three screens before I found that setting annoyi

LOG ON. There’s one more hurdle to take while getting accustomed to the interface. MicroProse was searching for a compromise between the comfort of a point & click interface and the flexibility of a parser, so next to your standard commands like ‘take’ or ‘push’ (strangely, ‘throw’ is also among them), each item has its own set of uses. Players condition to more recent Lucasarts games tend to overlook that they can “look at” something through their binoculars or “disassemble” them, instead of a simple ‘use’ command. LOG OFF. 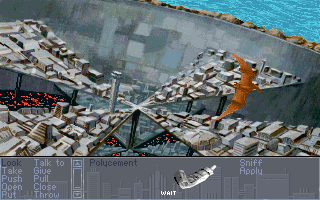 LOG ON. That said, the game really takes off in the second half, where you have access to most of the game’s areas at all time. At this point, you just explore Machopolis while examining and grabbing stuff left and right just because you can, until slowly a plan forms up in your head. This big puzzle is one of the most natural and satisfying experiences in the entire genre. If only it weren’t for the aggravating, non skippable driving-cutscene at each location change. There’s also quite a few ways to die, but it’s not nearly as annoying, as the deaths are just played for laughs, and you’re immediately placed at the screen before your untimely demise, like in some of the later Sierra games. LOG OFF. Now where did I put the death scenes? Ah, there, after the

LOG ON. The grapics are kind of a mixed bag. While most backgrounds are beautiful pieces of pixel art, the somewhat-half-digitized-actor characters are rather ugly, and seem somewhat inconsistent visually. Only the intro is fully voiced, but given the low amount of dialogue in the game, one cannot help but think it wouldn’t have been to much of a burden on the budget to include voice over for the whole game, especially given the amateurish acting and execution. LOG OFF. Come to think of it, there couldn’t have been much of a budget to begin with… 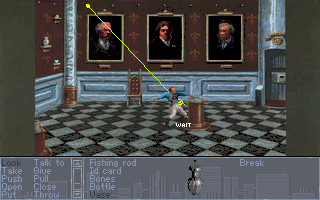 LOG ON. As soon as the game’s weaknesses, most prominently the unconventional interface and the ridiculously low difficulty level in the beginning, Rex Nebular and the Cosmic Gender Bender becomes quite strong in the latter half. The only problem? Soon after that, it’s already over. This game is incredibly short, with only three major areas to explore: the wilderness, the Keepers’ base and Machopolis. There’s also some stretches of loneliness, and relatively few characters to interact with, though it is quite befitting of an abandoned city such as Machopolis. The Cosmic Gender Bender almost feels like a chapter from a much bigger game, and Steve Meretzky’s audio log leaves one hungry for more adventures of Rex Nebular, a structure that seems predestined for an episodic form like it is not uncommon with adventure games today. Too bad we’re probably never going to see any. Rex Nebular didn’t really have much of an impact to begin with, and while the name MicroProse still kinda exists as a trademark somewhere, it hasn’t much to do with the original company anymore, and it is highly doubtful that anyone involved with it at this time even knows about it, anymore. LOG OFF. That’s it, time to call Lolita for some