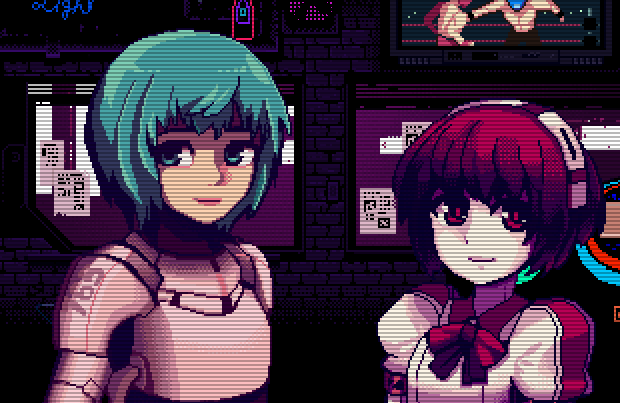 So, some video gamers in Venezuela who really liked anime got together, made a prototype game for a game jam, and figured they could make something more out of it. Their idea was VA-11 Hall-A, referred to lovingly by them as “Waifu Bartending” for a time, a cyberpunk themed visual novel revolving around a corrupt order of private police called the White Knights, human augmentation, artificial intelligence, and corrupt companies. The twist was that, unlike Read Only Memories, you wouldn’t be playing as someone central to the story changing this world, but as a lowly bartender hearing stories from her customers. The game was released around the same time as other narrative heavy indie games, and ones that included equally diverse casts and queer characters. Despite that, the down-to-Earth premise in a very fantastical setting did a lot for the game. 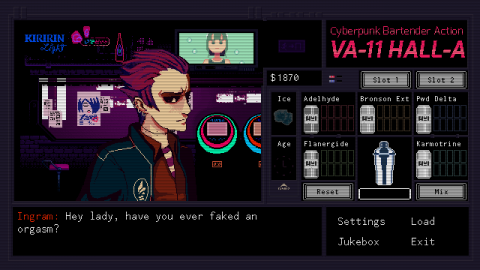 The story proper follows Jill, a young girl working as a bartender in the titular VA-11 Hall-A, also known more commonly as Valhalla. She prepares drinks for whomever wanders into her little hole in the wall, and most everyone she meets is …interesting, to say the least. Talking dogs are normal here. The stories that unfold at the bar and through news posts and forum discussions create the game’s narrative, mainly composed of a mysterious hacker named Alice_Rabbit, a strange girl who may or may not be real that haunts Jill, and a letter at Jill’s house that’s connected to her traumatic past. The most notable regular faces at Valhalla include… 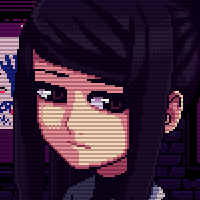 The player character. Jill’s past is marked by a rocky love life that’s left her a bit bitter, but she’s otherwise professional. She also has a massive crush on her boss and a cute cat named Fore. Her customers tend to gravitate to her stoic attitude and simple but wise advice. 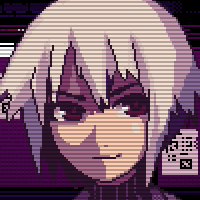 Jill’s boss and the owner of Valhalla. Her past is a series of ridiculous stories involving pro-wrestling, bear fighting, and mass brawls, and more than a few of them are actually true. A carefree goof, but cares deeply for her employees. Just keep her away from helmets and jars. 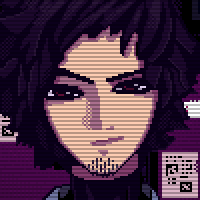 Jill’s co-worker, and an enigma in his own right, with hints of connections to Hong Kong rebels and the KGB. Gillian isn’t even his real name (which is likely taken from Konami’s Snatcher). Most people see him as bland and simply call him John. Alma gives him the nickname “Fuckboy,” which sticks. He mostly does all the dirty work at the bar and watches over clients who need an escort home. 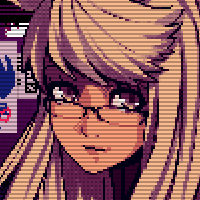 A regular for about six months. She works as a hacker and has cybernetic hands. She also has a very active dating life that quickly goes nowhere, a large family she loves, and a habit of teasing girls she finds cute (mainly Jill). Loves classy drinks, and digging up embarrassing personal info on Jill. 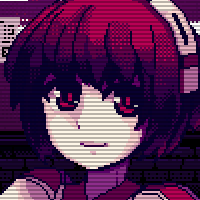 An android girl who works as a prostitute, and has every nasty story you can think of, plus far more. Peppy and upbeat, has a dirty sense of humor, but also has a complicated family life and starts stressing over her existence. Also, terrified of dogs and chinchillas (the latter which are thankfully extinct). All about sweet drinks. 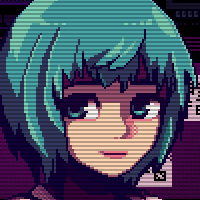 A member of the Valkyrie unit of the White Knights, whom act as rescue workers and paramedics. Insanely tough, but very pleasant, caring and straight forward. Likes cold, non-alcoholic drinks. Hinted to be autistic, and has trouble learning or thinking the same ways others do, but is quite the sharp tack in her own right. 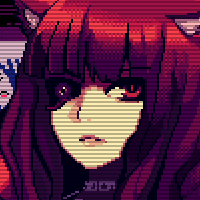 The daughter of a major businessman and Sei’s best friend. She’s a cat boomer, a human born with cat-ear-like growths on her head as a side effect in treating a nanomachine illness. Despite her stoic and judgmental appearance, she’s actually quite energetic, easily embarrassed, and worries constantly over Sei’s well-being. Has a complex over her fake eye. Has varied taste. 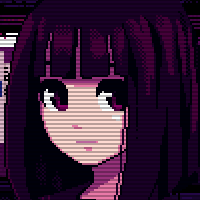 The girl from the game’s prologue demo. Jill served her drinks, but only Jill could see her. She appears in the game mainly through TV static, and eventually starts talking to Jill again in the last week. Her past is connected to another regular… 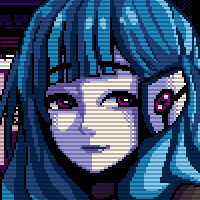 An android idol that wanders into the bar before a show. She’s an accomplished musician and passionate about her work, more than you may initially imagine if you get her to open up. Stella is one of her biggest fans, and getting a cup signed from her makes for a great conversation starter. 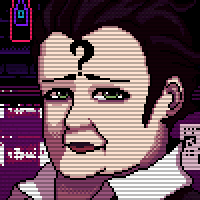 An obnoxious putz that becomes a regular. He loves to order in strange riddles and argues about philosophy in insanely incorrect ways. There’s far more to him that initially appears, and this fool actually has a massive role in one of the subplots. He is also based on game journalist Jim Sterling. Works at the Steampunk museum. 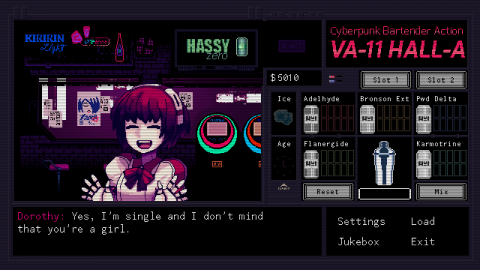 Keep in mind, there are plenty more people to meet, including and not limited to a cyborg hitman, a talking shiba expy of Big Boss (from Metal Gear Solid), a detective who looks a lot like George Costanza, and a few special guests if you figure out a secret drink. And yes, a ton of these people are queer, which shouldn’t be surprising when the game makes not so subtle references to the likes of Christine Love and the aforementioned Read Only Memories.

The entire game’s story is effectively a series of subplots where Jill either plays a crucial role in the lives of people she talks to, or simply sees a bit of their life and makes small talk. This actually works in the game’s favor. The focus of the game is more on the dialog between the characters, which is fantastic, making exposition dumps legitimately interesting by framing them as casual conversations with characters given enough personality quickly enough that you care what they have to say. It’s more a slice of life than a cyberpunk yarn, and the actual main conflict of Jill’s story is something that could easily happen without the sci-fi setting. The game jam prototype prologue, featuring a group of corgis, was originally separate from the game, but a later patch included it, updating its visuals and interface to match the main game. 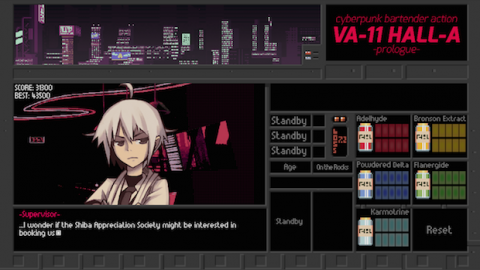 That’s not to say the setting is meaningless. The great thing about cyberpunk is that it’s a genre that’s fantastic at reflecting life in the age of computers and internet. Greedy conglomerates, technology growing at incredible speeds for good and ill, mass and easy connection, surveillance as an expected reality of daily life, political corruption, etc. It’s all stuff directly ripped out of our fears and anxieties of the modern age, and creates a gloomy atmosphere. But VA-11 doesn’t wallow in the darkness. Instead, it shows how life goes on despite all the horrid things going on in the world, not unlike how the real world functions. People deal with all sorts of horrid events out of their control, and they continue to live their lives despite. 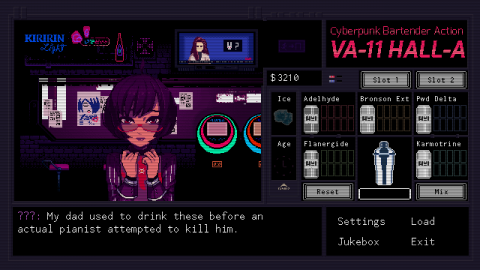 The bar setting is perfect to explore pains and fears, but to also give everyone moments of reflection and fleeting joy. There’s laughs to be had, things to learn, and stories to share. Fernando Damas’ script can’t be applauded enough, it exudes life in all its modes, lacking the sheer power of something like Actual Sunlight, but looking at a wider scope of emotion. It helps the inner turmoil of the characters are all based on the familiar, like family drama or past regrets. By the game’s end, things aren’t solved with an exciting fight or heated argument, but just people being honest with each other and mending something long thought lost. And that’s beautiful. Adding to the authenticity are the developers experiences in bars in their home country. They’re kind of used to living their lives on a crumbling infrastructure, so the script makes great use of those experiences.

Of course, you also get scenes where a grown woman admits to bullying a girl because she thinks her fearful state is cute and talking shibas (one in sunglasses) talking about how boxes are shipped, so there are laughs to be had. Lots. The game can be a riot at moments, particularly any scenes involving Streaming-chan or Dorothy. It’s goofy and exaggerated, and it works wonderfully. Even more impressive are the subtle little bits of characterization that helps build the world and the issues it faces, from off-handed comments about cybernetics to how people react to androids differently. The developers have a better understanding of how actual prejudice looks like than most. 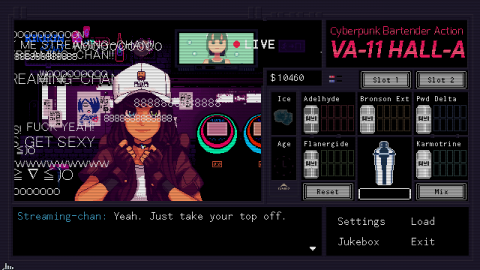 The main mechanics of the game are also very clever in their simplicity. Outside work, you have the options of reading posts on websites for worldbuilding and to get updated on a few characters, along with buying stuff from a nearby store. Every day, Jill will start thinking about something she wants, and if she doesn’t get it, she won’t focus properly. This is important, because if Jill doesn’t focus properly, when you go to make a drink, she’ll be thinking about something else than what sort of drink she should make for her client. Jill has three bills to pay through the game, and it’s best you pay them to do your best at work, and that’s hard to do when you can’t focus.

There are no dialogue choices here, simply making drinks. Clients will request drinks as you play, so you make them to best match their requests. There’s a bit of Papers, Please here (which incidentally gets referenced), as you dig through a catalog of drinks in different categories, get the recipe, then add in the desired amount of each five ingredients, click a box for ice or aging if needed, then either mix for a short period or blend for about five seconds. 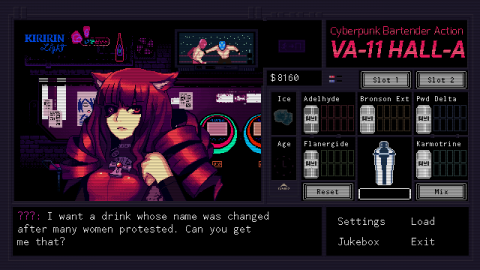 The trick is serving the right drinks. You earn your pay by making drinks properly and without mistake, but you also become closer to many characters via knowing them well and serving accordingly. You can also change dialog by getting characters drunk off their butts. Some drinks have optional Karmotrine, meaning you can have none of it and make them non-alcoholic, or you can load them up and destroy a some brain cells. Sometimes, getting characters drunk IS the right call, and even necessary for one particular ending. Don’t worry, the staff takes care of passed out clients.

Otherwise, the game is all dialog, with a few shake up moments, like intimate dialog with some characters in codec like screens, or the ever amusing sequence where Jill and Dana drink some beers at her apartment, complete with giant “DRINK!” button. The presentation overall is stellar, capturing the look and feel of old PC-88 titles, most notably Snatcher, and using a lot of screens within screens. The artificial look adds to the cyberpunk theme, as does a scanline filter that gives the game is slightly distorted look that really makes the sprite work pop. Micheal Kelly’s score can’t be praised enough either, it’s a perfect storm of great techno and electronica. Lots of great mood pieces, and some just grimy in the best way. 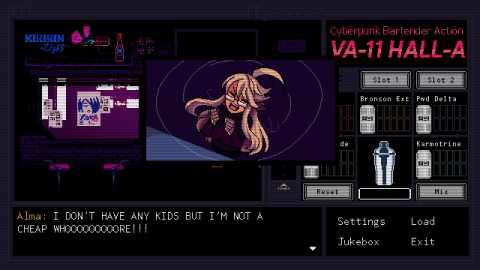 That old feel mixed with fresh ideas makes VA-11 Hall-A truly something special. At the end of the day, it’s a familiar story we don’t hear enough of. It’s about the lives of the people on the street, from every age and race, how they see the world, and how they keep going despite. There’s no dating to be done here, no cheap titillation or explosive climaxes. It’s all just taking in something bitter yet enjoyable, like a good shot of whiskey.

Also there’s a scene where Dorothy sees a sausage in a large box delivered to the bar and starts making jokes about wieners and packages. Good game.