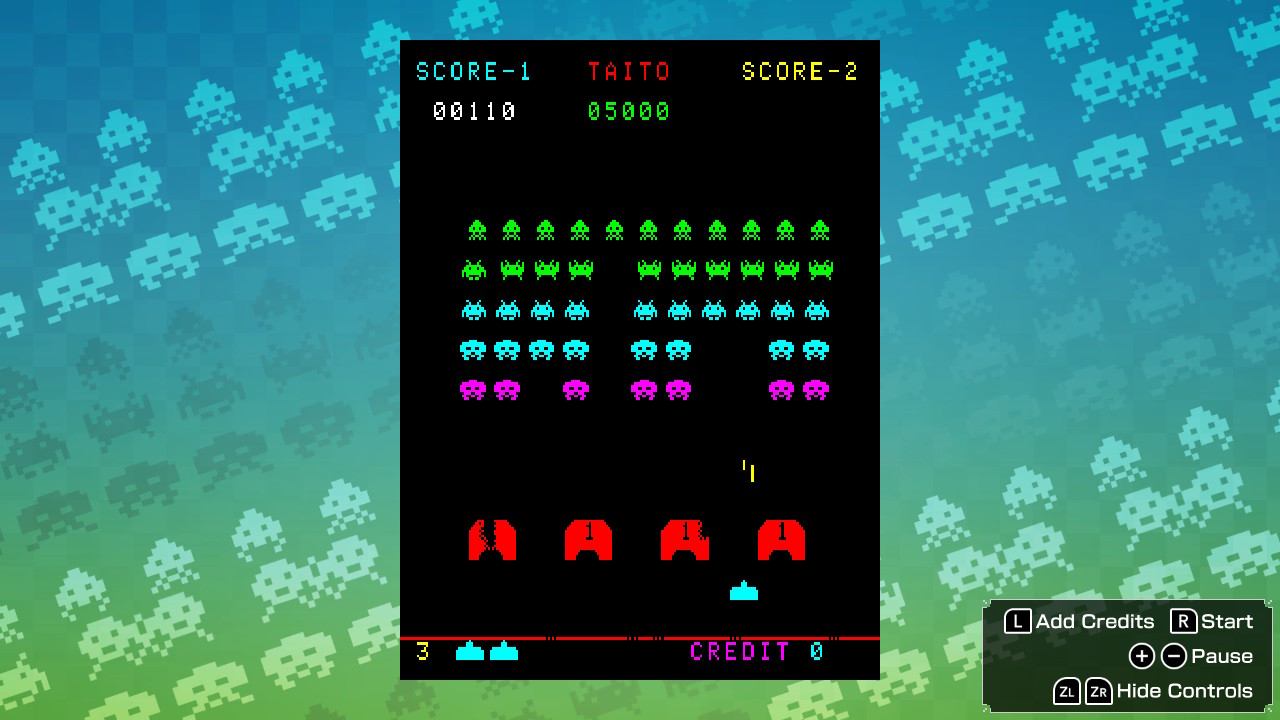 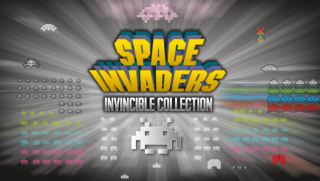 Released in 1978, Tomohiro Nishikado’s Space Invaders is one of the most popular arcade games of all time. There have been several ports and sequels over its 40+ year history, and Taito has sought to collect them in two recent collections: Space Invaders Invincible Collection, and the stripped-down Space Invaders Forever. 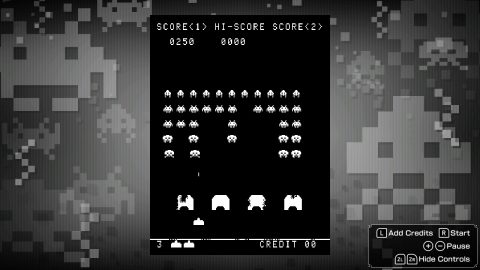 The very first, original version of the game, all in black and white. If playing on the Switch, you can play this and any vertically oriented arcade game by turning your system sideways in portable mode. 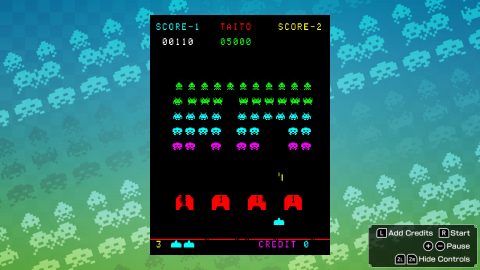 The colorized version of the original Space Invaders, which doesn’t change much else beyond adding the capability for five digits score, over the four of the original version.

Also known as Space Invaders Deluxe, this is a slightly enhanced version of the color upgrade of Space Invaders with a handful of additions, like aliens that split into two, blinking UFOs that are harder to hit, and brief inter-stage cutscenes. It was also the first version of the game to allow name input for the high score screen. 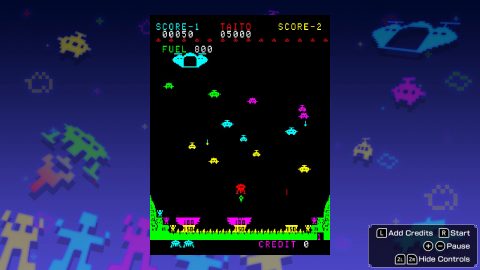 A related title developed using the same arcade board. Controlling a lunar lander, you’re dropped out of the sky by an airplane, and must land on one of three pads to rescue one of the humans trapped on the surface while avoiding debris. Then, you make a return trip back to your flying base, and then begin another round. When descending, the fire button shoots thrusters that slow your descent, while when ascending, it fires a bullet upwards to attack UFOs. Conceptually it might seem like Atari’s Lunar Lander, released earlier in the year, but it’s much simplified and more straightforward – no complicated physics to worry about, just drop down and avoid stuff, then do the same going back up. The Space Invaders aliens make a cameo on the title screen. 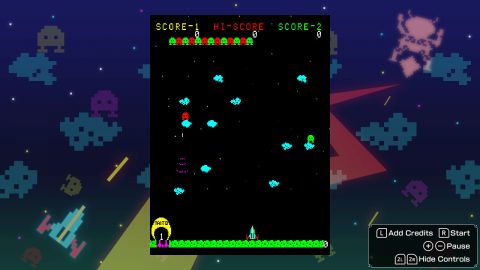 Another related game using the same arcade board. It’s similar to Space Invaders, except instead of the aliens lining up in formation and slowly descending, they’re much fewer in number and ride on meteors. Once you’ve zapped enough of them, you move onto the next level, but if too many land, then they’ll build a flying mecha you must contend with. These are much larger than average aliens, and the action pauses dramatically when you kill one. The UFOs are much fiercer here too, sending enormous lightning bolts and bombs from above. There’s some synthesized speech, as well as cute mid-level scenes where an alien teaches you a constellation. According to the in-game notes, this game was exceedingly rare in Japan, and was never previously ported to any console, whereas Lunar Lander was included in Taito Legends 2. 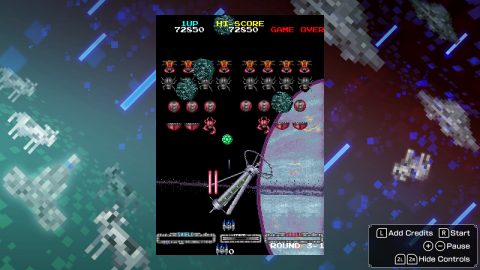 The fourth Space Invaders game (the third is missing) is a substantial upgrade over the versions from a decade prior. Since the series was now competing with more advanced arcade shooters, it’s seen a huge visual enhancement, with numerous backgrounds and different alien types, as well as boss battles. The action moves faster and waves are cleared much more quickly, plus your ship now has a shield and can obtain different power-ups, too. The most amusing bit is the bonus stage, where alien UFOs abduct cows, which you must shoot down to save. After wiping out enough waves in a given stage, you can proceed to the next, where you’re given a chance to proceed down different branches, a la Darius.

Basically just the international version of Majestic Twelve, this version removes the stage selection function in favor of linear levels. 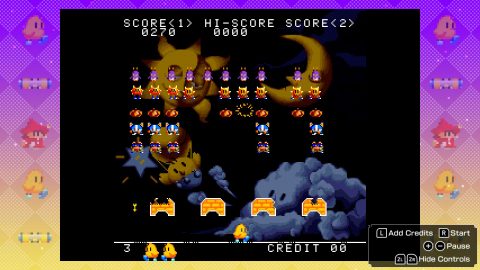 In 1993, Taito ported Space Invaders to the SNES for the series’ fifteenth anniversary. Due to its popularity, it was then ported back to arcades the following year with added content. This includes three modes: Original, Parody, and Versus. Original is much as it sounds, being pretty much as a straight port of the first game, though there are four screen selections, allowing you to pick black and white, color, black and white with colored cellophane on top, or a screen that mimics the background of the arcade cabinet, wit backdrop of a brown planet against a blue space sky. Parody mode is in full color and replaces the sprites with characters from other Taito games like The NewZealand Story, The Fairyland Story, Bubble Bobble, Kiki Kaikai, Arkanoid, and others. The Versus mode has a split screen, with colored aliens that have different effects on either the player’s or their opponents field, including shifting down the alien lines or adding new lines.

Due to the various screen selection options and different modes, this is probably the version you’re going to want to play over any of the originals. It’s not entirely authentic, though, since it was designed for a horizontal monitor rather than the vertical one that the original arcade games uses. 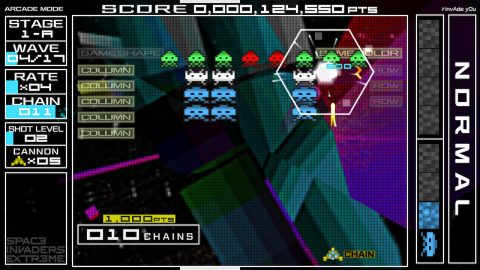 Namco’s 2007 release of Pac-Man Championship Edition reimagined what retro arcade remakes could be, and so Taito followed suit with Space Invaders Extreme. The visuals are a combination of chunky pixels and trippy, dance club-themed visuals, with a soundtrack that mixes up music and sound effects, a la Rez. Each level consists of several waves of foes, most of which are easily disposed of thanks to the regular weapon drops, which include lasers, bombs, and multi-shot cannons. With a combo system that allows for high scoring, and ever changing playing fields, this is easily the best Space Invaders has ever been. Originally released in 2008, this version is based on the slightly tweaked re-release which was published on Steam in 2018, though the DS-exclusive sequel is missing. 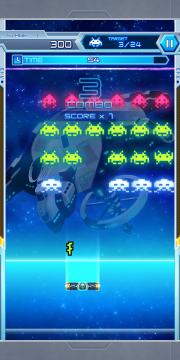 This isn’t included with the game’s main menu, instead appearing separately on the Switch game selection screen. Just as the title says, this is a combination of two of Taito’s arcade franchises, Space Invaders and Arkanoid, originally developed for smartphones, and making their console debut here. Controlling the Vaus spaceship against hordes of aliens, you don’t dodge enemy fire as in Space Invaders, but rather reflect it back in order to them. You also build up energy as you play, which lets you go on the offense to launch a bouncing ball. There are several power-ups featuring characters from classic Taito games, including Reika from Time Gal, Sayo-chan from Kiki Kaikai, the ninjas from The Ninja Warriors, Lufia from Lufia, Patrako from Cleopatra’s Fortune, and many others. For the Switch version, this can only be played in tablet mode with touch controls. For the PlayStation 4, you need to use the touch pad on the controller. Altogether, along with Space Invaders Extreme, is one of the best titles on this collection. 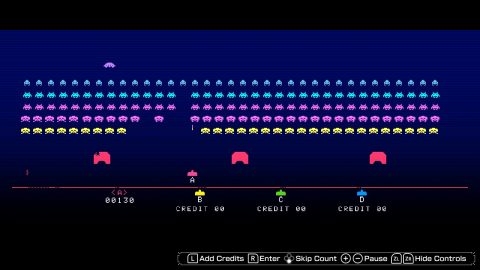 The newest game on this collection, it presents a widescreen playing field and allows four players to play at once. Playing this game with multiple people is pretty much mandatory, considering the huge playing field on the first part of each stage allows for over thirty rows of aliens. Subsequent levels present less stringer formations of aliens, which can grow in size when you hit them, as well as enormous UFOs, where you can join firepower with other players for stronger shots. The visuals are pretty sparse, just the original Space Invaders color graphics with simple striped, colored backgrounds, and occasionally some glowing effects. It’s not even remotely as interesting as Space Invaders Extreme as far as updates go. though the newly added Zuntata music tracks are appropriately trippy.

The collection of titles here is more comprehensive than any previous compilation, but there are some noticeable omissions. Return of the Invaders, the third entry in the series which was designed by UPL, is missing. So is Space Invaders ’95: Attack of the Lunar Loonies, which had taken the Parody mode of Space Invaders DX and expanded it even further, turning the whole game into a cute-em-up. Both of these had previously been released on assorted Taito Legends/Memories packs. Also missing is Space Invaders Get Even, the WiiWare exclusive game where you play as the aliens; Space Invaders Infinity Gene, another re-imagining of the core gameplay, which was previously released on smartphones, the Xbox 360, and PlayStation 3; and Space Invaders Revolution / Space Invaders Evolution, two other revamped versions for the DS and PSP, respectively. Plus, there was a previous Space Invaders Anniversary compilation for the PS2 and Windows that included several additional modes, none of which can be seen here. 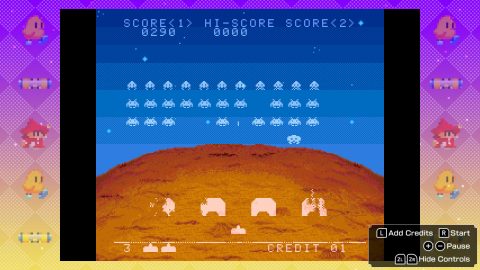 As a historical compilation of one of the most important video games of all time, this comes up remarkably short just due to how much it’s missing. As a commercial product, there’s only a few games here that would be appealing to modern gamers. It’s particularly disappointing since the collection hypes up how many Space Invaders games it contains, but in reality, some of these are just slightly different versions of one another, and one (Gigamax) just isn’t worth playing at all.

The distribution is also extremely confusing. There are actually two separate Space Invaders compilations released in the West. Space Invaders Invincible Collection (only released on Switch) includes all of the above mentioned titles, while Space Invaders Forever (both Switch and PlayStation 4) includes only Space Invaders Extreme, Space Invaders Gigamax 4 SE and Arkanoid vs. Space Invaders. Furthermore, in Japan, the Genesis port of Space Invaders ’91 was included as an Amazon Prime Day exclusive, but it’s not included here at all. In the Japanese version of the collection, Space Cyclone and Lunar Rescue are only included with the extremely pricey limited edition, so at least the international collection is better in that regard.