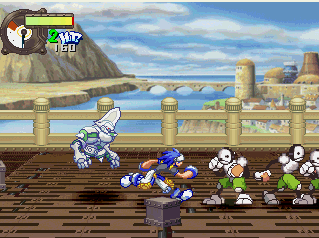 Sega/Treasure’s 1996 beat-em-up/RPG Guardian Heroes was a surprise cult international hit, but it didn’t come of out of nowhere. It was directly inspired by Fill-In Cafe’s Mad Stalker: Full Metal Force, which was only released in Japan for home computers and the PC Engine CD, which was in turn somewhat similar to the Asuka 120% fighting games. After this, one of its main programmers, Masaki Ukyo, went to work for Treasure, continuing the beat-em-up entries with Yu Yu Hakusho: Makyou Touitsusen and Guardian Heroes. Masatoshi Imaizumi, the other programmer on Mad Stalker, continued similar projects of his own at Fill-In-Cafe. His follow-up, the incredibly fun Panzer Bandit, published by Banpresto for the PlayStation in 1997 exclusively in Japan, is a much truer successor to Guardian Heroes than the actual GBA sequel, which wasn’t released until 2004.

The story takes place in a steampunk world called Kanadyne, where magic and science coexist. The land is inhabited by mysterious ruins from a long-dead civilization, whose secrets are found to be held in a vessel called Arc. There are legends being told about a being named Think, which may be either a god or a demon. The Golden Foundation has consolidated its resources to use the power within Arc for their own nefarious purposes, and only a group of bandits can stop them. 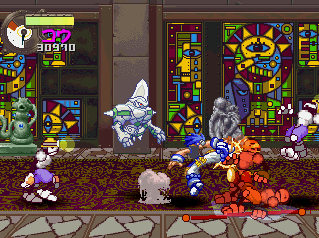 The game is structured like Gunstar Heroes, where you’re given orders by your team leader and can play through any of the first four areas in any order. Your commander is kidnapped at the midway point, so the second half of the game is played linearly.

The basic fighting feels like Guardian Heroes, though a bit simplified. You have two primary attacks (weak and strong), and a variety of simple Street Fighter-esque command motions to perform flying flips, fireballs, and whatever other special moves your character may have (and in case you’re not adept enough, most of the specialty attacks are mapped to the extra buttons on the controller). Even the bulkiest of characters are relatively agile, allowing you to super jump, double jump, dash, and almost fly around the whole screen. Plus, it’s extremely easy to pick up enemies and chuck them into one another (an element inherited from Gunstar Heroes), tearing new holes in everything. Blocking happens automatically when you’re in a neutral pose, plus you can deflect enemy attacks, giving the action an extremely aggressive feel. Hitting the trigger buttons will send your character leaping back and forth between planes, though there are only two compared to Guardian Heroes‘ three. There’s also the usual power meter, which can unleash a super attack when charged up enough. And as is natural for games of this type, you can choose to smash bad guys with a buddy by your side. Though it only offers a two-player simultaneous option in story mode, multiplayer mode offers up to four, providing you have a multi-tap or are playing on a PlayStation 3. It’s all reasonably simple, but a total blast to play.

Like so very many Japanese games, Panzer Bandit features cutesy, adorable character designs to compliment the hectic gameplay. The characters are designed by Yoshitsune Izuna, who also designed the characters for the anime OVA Saber Marionette R, as well as mechanical designs for Diebuster. (He also put out a doujinshi featuring artwork – slightly NSFW.) The aesthetic here is reminiscent of the vistas of Studio Ghibli films like Castle in the Sky, with mechanical designs reminiscent of Osamu Tezuka. 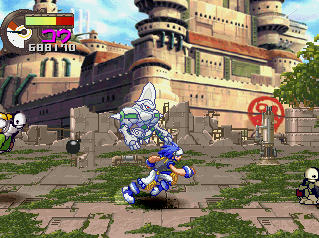 As for the main characters, Kou is the standard blue-haired anime hero who can shoot fireballs, and has a floating robot buddy to assist him as well. Kasumi is a ninja girl who attacks with a robotic girl by her side. These little helper pets travel alongside the player characters, though given that they really only perform super attacks, their full potential is never reached. Miu is an insanely cute little girl who rides on top of a gigantic mecha. She’s skilled at piloting this device even though she seems to have trouble with them. Finally, Ein is a badass robot filled with guns, lasers, and bombs – and he smokes a cigar.

Each level has a unique boss, and many of these are as equally colorful as the main cast, particularly Senka, a vivacious catgirl. In addition to the anime intro, all of the bosses have voiced pre-fight dialogues.  As with all of the other games in the Mad Stalker/Guardian Heroes lineage, these can all become playable in both multiplayer and single player modes, though they either need to be unlocked via multiple playthroughs or by entering a code. What is a little weird is that these secondary characters have their own personalities, but the actual four protagonists don’t speak a word beyond their attack grunts, and don’t really have any storyline dialogue. 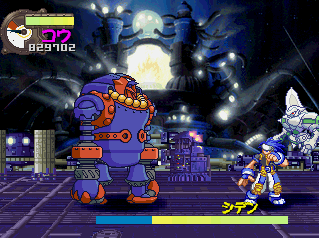 Panzer Bandit throws a lot at you at one time, but never quite reaches the epic chaos that Guardian Heroes immersed you in. While at times the game doesn’t quite feel busy enough, it also doesn’t overwhelm you to the point where you can’t see what you’re doing. While the foreground is polygonal, everything else is comprised of fully detailed, well-animated sprites. Even though the camera is constantly zooming in and out as you jump or switch between planes, the graphics stay fairly clear and never become the pixelated mess usually associated with scaling effects. The music is also similar to Capcom-style pop cheese that would feel right at home in a CPS2-era fighting game.

This being a side-scrolling brawler, Panzer Bandit is somewhat repetitive by nature. The fact that you’re really only fighting the same two or three enemies over and over doesn’t really help alleviate the issue. Almost all of the foes are the same weird monkey/skeleton robots, with only a few variations. By the time you hit the eighth and final level and have to fight all of the old bosses again, the experience begins to wear out its welcome. Further, while the lack of RPG elements like its forebearer isn’t necessarily a bad thing, the absence of multiple routes, or even multiple endings for each player character, leaves the content feeling rather sparse. 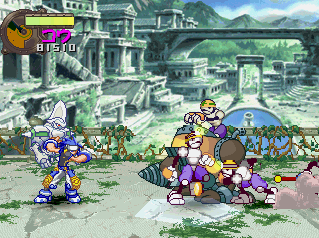 All things considered, however, when taken in spurts, Panzer Bandit can be elegant in all of its bone-smashing simplicity, leading to some of the best button-mashing fun you’re likely to find. It’s one of the more obscure PlayStation imports, and even only has cult status in Japan, where it’s regarded as “PlayStation’s version of Guardian Heroes.”