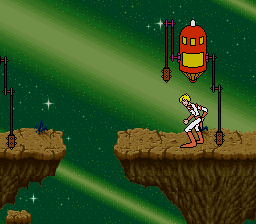 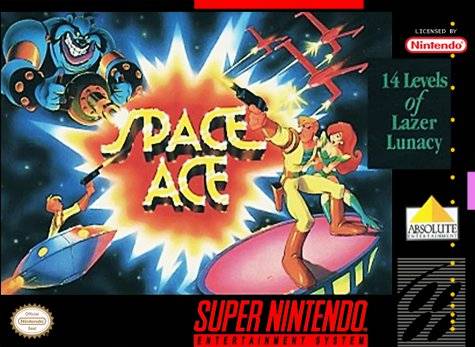 Those among us who take an interest in bad games are more than likely familiar with the NES adaption of Dragon’s Lair. This ill-advised adaption took a groundbreaking, if incredibly frustrating arcade game, and turned it into an exercise in frustration that’s now reviled the internet over. It’s old news by now, to be certain. While Dragon’s Lair got a second chance on the Super Nintendo, leading to a game that was only thoroughly average, another of Mr. Bluth’s creations would also get the 16-bit treatment. Since the top of the page says “Space Ace”, and not “Dragon’s Lair”, you can probably imagine how turned out.

The original Space Ace was an arcade game that put you In the role of Dexter, nerdy pulp-sci fi hero fighting the evil Borf, an alien warlord who looked suspiciously like an evil version of Aladdin’s genie. The game itself was controlled, to put it charitably, by watching the animated footage, and then either pressing one of the directions or the fire button at the exact time. Failure to do so led to seeing of the many, many, well-animated death scenes the game had to offer. Unlike the NES and SNES versions of Dragon’s Lair, which were platformers where the original game served more as backstory than anything else, this game adapts the arcade game as closely as a SNES action game possibly can.

Note that, in this case, this is very much not a good thing.

The issues begin from the very moment the game begins, where Dexter stands on a rocky cliff. About three seconds later, Borf appears, and starts flying around, shooting lasers. If you don’t immediately move out of his way once he appears, he’ll shoot you and instantly kill you. This is how the game begins, most likely killing you before you even realize you can actually start moving. Generally, pretty much all the game’s many platformer sections work out like this. The screen is constantly scrolling automatically, and enemies appear on screen with little to no warning. If you don’t happen to know just where they’ll appear, they’ll probably instantly appear on top of you and kill you.

It’s hardly the enemies you have to worry about, either. Dexter takes up a large amount of the screen, and given the game’s odd perspective, it’s difficult to tell where he’s going to land. Given how much platforming over bottomless pits the game has, this is probably where most of your many deaths are going to come from. It doesn’t help that Dexter’s jump is incredibly terrible, floaty on its way up, before slamming back down, with absolutely no air control in between. Most of the time you spend jumping will be spent trying to figure out exactly where Dexter is going to land, which is especially important since even touching the edge of a platform will kill him. Since everything kills Dexter in one hit, there is absolutely no leeway or room for mistakes. Especially given that there are absolutely no checkpoints to be found throughout the game, meaning that one mistake means you redo the stage.

Every so often, the game will give you the chance to “ENERGIZE”, which lets Dexter turn into Ace, his super studly adult form. The only actual difference between Dexter and Ace, however, is that Ace actually manages to remember he has a gun with him. Shooting things is just as awkward as jumping, since first, you have to target an enemy with either the A or X buttons. Sometimes one button or the other won’t work, so you’ll never be sure which button you actually have to hit. Then you have to wait for the crosshair to move from Ace to the enemy, then press the Y button to shoot, before hitting either A or X, whichever the game decides, to target another enemy. This is often during a point where the screen is scrolling, threatening to shove you off a ledge, or when enemies are shooting out lasers that will instantly hit you the moment they chose to fire, if you’re in their way.

Between levels, you’re sent to the “Space Maze”, a Mode 7 labyrinth where you have to pilot Dexter’s Starfighter, looking to the entrance to the next level. The problem with these stages is that you’re given absolutely no direction on where you’re supposed to be going, and the entire maze looks exactly the same. This means you’re probably going to be spending far longer than you would actually want trying to find where you’re supposed to be going. To add insult to injury, this is the only point in the game where you can take more than one hit, and since you have no way of slowing down or stopping, you’re going to need this for all the crashing into walls you’re going to be doing. Eventually, you’ll reach the “Rocket Skate Maze”, which is similar, with the addition that there are no walls, only instant death pits. You’re expected to do this three times.

The entire problem with the game is that there’s absolutely nothing to do it beyond rote memorization, where you’re expected to get every single little movement right, under penalty of doing it entirely again. In fairness, you could say the exact same about the original arcade version. At least there, though, the buttons did what they were supposed to do, as long as you hit them with the right timing. Here, however, you’re expected to constantly be platforming and shooting enemies with a control setup that is very much not designed for either. Beyond that, you’re left with a very dull game, with the only really interesting thing about it being the grainy animations that play when you die or beat a level that could kind of sort of be described as some manner of FMV. There are so many ways to play the original Space Ace, that trying to play this exercise in tedium is unnecessary in every single way.