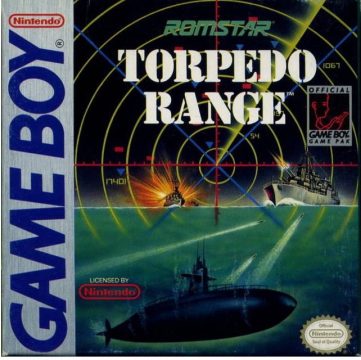 Torpedo Range is one of those forgotten Game Boy games that only seem to have existed for a few seconds in the 90s before vanishing from the public consciousness. The game concerns a super-submarine trying to stand up to terrorists who have conquered the world.  Why your naval battles are able to liberate some of the world’s largest land nations is a question best left unanswered.

You start the game by picking one of the game’s six nations: the USA, USSR, Japan, the UK, Canada, or Australia. This determines your overworld sprite and starting location, as all other countries have already fallen to the baddies!  You must then navigate a fully-rendered map of the world – the game thankfully includes a map button to help you find the naval bases on massive coastlines like Canada and Russia’s, and yes America’s base is in the Pacific.  Once you get near, you’ll discover their fleets.  Torpedo Range is divided into four game modes based on the ship you want to fight, plus a final mode for fighting the enemy’s coastal base, each mode with its own catchy musical theme.  Each craft is marked with a 1-5 star rating to indicate its difficulty, except the base, which will always be the hardest.

Enemy submarines and aircraft carriers are fought in side view.  You can move in all four directions and a momentum system involved, which makes quick movements and sudden stops impossible. Sadly, enemy submarines are a bad foot forward.  Their AI is completely random and they move in unpredictable sweeps. Most sub-to-sub fights end with collisions instead of projectiles, and it rarely comes down to skill.

The aircraft carrier is much better. These scenes are heavily based on Taito’s 1980 arcade game Polaris. It’s your upwards-firing missiles versus the airplane’s depth charges, which bob around in the water as they sink to make their pattern more interesting. There’s a lot to keep in mind: the charges give you a mess to navigate, new projectiles are constantly incoming, and you’re still trying to land your shots on the sweeping aircraft.  On higher star levels, planes launch even more charges.  After launching the last plane, the carrier slides off the screen to fight you in person.

The three remaining modes are done surfaced, and are controlled in over-the-bow perspective. You can move left or right, but your sub is extremely slow and demands precision. In these modes, your shots and the enemy’s take time to reach their targets, so you want to be in and out of range to avoid taking damage.  Nowhere is this more obvious in cruiser mode, which takes its inspiration from one of the oldest physical/electronic arcade hybrids, Periscope from 1965/6. You’re trying to take down three cruisers at different distances, each harder to hit than the last, but less likely to hit you in turn.

Battleships are the hardest of the standard modes: your objective is to take out the ship’s guns, while other, invulnerable threats move on and off screen that vary by enemy country.  Soviet mine ships drop mines at your side, American planes drop fast bombs, Japanese battleships launch slow missile barrages at your position when the launch starts, and British bombers fire devastating spread attacks. Australian and Canadian ships simply get extra guns (one for Australia and two for Canada). Getting hit here temporarily prevents you from firing, which is a huge problem.

Lastly, you come to the enemy bases.  These are basically battleships but at a much further distance, and with no additional threats. The teeny-tiny coastal guns look silly on screen, but are tricky to hit, have a wide spread, and stun you like battleships.  Unfortunately, they never get more complicated, which makes for a dull “boss” as things go along.

After each base, the remaining fleets get statistical upgrades.  To keep up, the game uses an upgrade system. After every fight, you get a payout that you can spend to upgrade your sub, with higher payouts for higher-star enemies and all battleships, but lower payouts for the brainless submarines. The player can buy health and ammo capacity upgrades, as well as “super shots” which are wider and more dangerous than normal shots. Super shots cost a pretty penny at first, and don’t regenerate, which means they simply can’t recoup their costs against a standard enemy.

The ammo capacity upgrade has a larger impact than it sounds, since fights end when you run out of torpedoes. Ammo conversation is an important part of the game, and part of what makes it fun, but it also serves as a frustrating pay-gate: you must upgrade your torpedo capacity to take out higher-level craft, especially bases and late-campaign Australian and Canadian battleships, and those payments are expensive.  This turns Torpedo Range into something of a grindfest, taking away from what could have been a pick-up-and-play experience.  Obnoxiously, you lose all accumulated points if you die or run out of ammo, which is just going to force the player to reset the game over and over. It’s a shame the more complex and engaging challenges are walled off by grinding, but anyone willing to put in the effort will be rewarded. 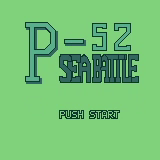 Despite Torpedo Range’s obscurity, it received an inexplicable rip-off for the equally-forgotten Watara Supervision. The Supervision was home to clones aplenty, but most were clones of games you’ve actually heard of, like Mappy or the not-at-all camouflaged Balloon Fight. Still, a handful of contemporary Game Boy titles got cloned too, and Torpedo Range was one of them. Developed by Watara themselves, the clone was dubbed P52 Sea Battle. 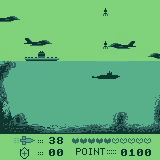 P52 Sea Battle uses a menu screen instead of a world map, with only three enemy countries: the UK, the USA, and the USSR (the USSR had actually fallen in the real world by the time the game was released). There are no enemy bases: your objective is to eliminate the enemy fleet by sinking one of each ship type across four star levels, all without exhausting your supply of three lives. Cruiser (redubbed “Destroyer”) mode is basically identical, as are submarines (“Torpedo”). The submarine AI isn’t as laughably reckless on the Supervision, but they’re still dumb as rocks. The aircraft carrier now fights you alongside its planes, but their depth charges simply travel in a straight line instead of bobbing.

Lastly, battleship (ironically dubbed “Cruiser”) stages no longer scroll left to right, and the guns are much smaller. Once again, battleship defenses vary by country: Soviets get a downward-firing ship instead of a mine ship, the British get the formerly-Japanese missile barrages, while the American bombs are slowed and probably the easiest of the three to dodge.

On the player side, prices in the shop do not increase, making it easy to max your ship, though there are no super-shots, and the purpose of the item that replaces them is unclear. 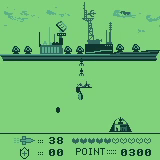 Like all Supervision games, P52 Sea Battle has terrible flicker on emulation, and awful ghosting on the original hardware. Sprite movement is janky, and the audio is grating. Worse, it only has a single musical track, which plays non-stop no matter the game mode.  It’s also one of the only Watara rip-offs that steal sprites wholesale from the original, although most are still new. That said, the presence of a minimalist campaign does set the game apart from a lot of the Supervision’s arcade-style entries. Unfortunately, there’s no ending: the player is simply returned to the level select, with the country buttons greyed out and unusable.