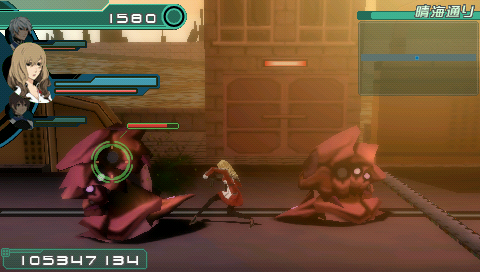 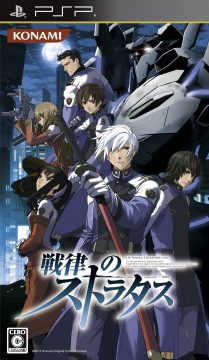 It’s the year 2058, and Earth has been invaded by mysterious creatures called “Memes”. Essentially formless, they absorb and assimilate information, using it to expand and conquer their victims. Kudan Seishiro, an early victim of the attack and subject of several government experiments, is made leader of the Imperial City 6th Division, and it’s up to him and his squad to fight back. The game was directed by Hifumi Konno, who previously worked at Human on the Clock Tower games, while it was developed by Nude Maker, who worked on unique titles like Steel Battalion and Infinite Space.

Senritsu no Stratus (“Terror of the Stratus”) frames each of the game’s nine chapters as an anime episode, opening with an animated introduction and vocal song, and ending with a “next episode preview” teasing upcoming developments. There’s quite a bit of anime FMV too, production the studio Satelight, and using a number of professional voice actors. In each episode, a new giant creature has touched down in the city, causing chaos.

The actual game is divided into two segments. In Defense mode, you control Kudan and various members of his squad as he surveys the destroyed landscape, killing the smaller enemies it’s spawned. These sections are represented as side-scrolling action scenes, relatively open-ended but generally not very large. Destroyed enemies will drop currency that will let you upgrade your weapons, giving it a loose RPG feel. However, the most important part here involves hunting down and questioning the human survivors, because you then have to use this data to create a report, which will determine your plan of attack. Then, in Extermination mode, you climb into the cockpit of the giant Arabaki mecha to actually confront and destroy its foe in an overhead action sequence, exploiting the weakpoints you learned about earlier.

The ideas present in Senritsu no Stratus are not all that innovative – the “game as TV anime” premise has been seen as far back as Sakura Taisen on the Saturn, the premise itself is very reminiscent of other mecha anime like Neon Genesis Evangelion and Gun Parade March, and the action-RPG elements are not only rather typical, but clumsily implemented. It does set an appropriately dark mood, though – several main characters are killed off fairly early on, and there’s a counter of the world’s population displayed at the bottom of the screen, which is constantly running down due to the alien attacks. Individually, each piece is nothing special, but it all works together well enough to create an interesting end product. Plus, while the game isn’t very long, subsequent playthroughs allow certain characters to survive, mixing up things a little bit.