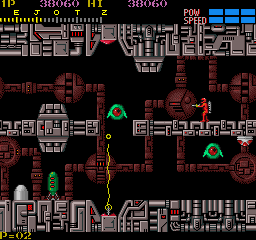 In Capcom’s early days, they developed a handful of vertical shoot-em-ups patterned after Xevious, including 1942, Vulgus, and Exed Eyes. Section Z is their fourth shooter, though this time changing perspectives to a horizontal one.  The game was designed by Takashi Nishiyama, previously of Moon Patrol and Kung Fu Master for Irem, who later created Street Fighter for Capcom, left for SNK, and then founded Dimps in the early 00s. 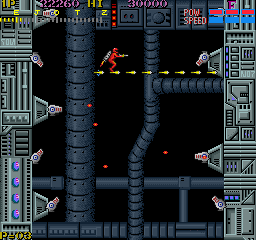 In the far future, the alien Balangool empire has built a space station within an asteroid orbiting close to Earth. As an unnamed soldier, clad in a red spacesuit and wearing a jetpack, you must infiltrate the base and destroy it from within. The game gets its title from the 26 sections within the station, each named after one of the letters of the alphabet. There are five levels total, with each having several of these areas, which act as respawn checkpoints after death. An indicator at the top of the screen helpfully charts your progress from the beginning at section A, to the climactic encounter in section Z.

Section Z is a little unusual in that you can actually collide with the scenery without any damage – indeed, you can actually land and walk on the ground. However, you can get squished if you get caught off the end of the screen. By default, when hitting the fire button, you’ll shoot both your forward firing gun and lob a grenade, which travels at a downward parabola, similar to the missiles from Gradius. There are speed increasing power-ups, as well as weapon enhancements to increase your rate of fire, but otherwise that’s the extent of your arsenal.

In addition to the fire button, you can also turn left and right with the other button, allowing you to shoot in both directions. While not terribly important initially, this becomes much more useful in all of the later levels, since they scroll in different directions – the first and fifth stages move from left-to-right, the second scrolls upwards, the third right-to-left, and the fourth downwards. It gives each stage a very dynamic feel, constantly challenging you by sticking familiar enemies and obstacles in different orientations. 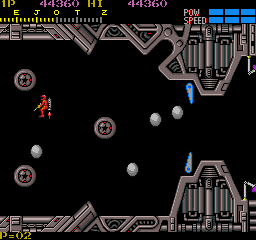 The visuals aren’t anything particularly exciting, but not bad for 1985. The design of the main character is kinda cool, particularly the striking red color, but his default posture makes it look like he’s sitting on a very uncomfortable toilet. The asteroid base starts off in a typical sci-fi setting, but as you make your way through the sections, it becomes overtaken by plant-like organisms, with a biomechanical feel similar to other shoot-em-ups at the time. The oddset section of the game is near the end of the third level, which has a section designed like a pinball table, as silver balls shoot out and ricochet around the screen.

It does seem to take some influence from some similar titles from the era too – the graphic design of the initial stages, plus some of the enemies, is awfully similar to Gradius, plus the basic concept (soldier in spacesuit), as well as the one-eyed alien enemies, seem borrowed from Namco’s Baraduke. Though since these were released earlier in 1985, it’s hard to really say if some of it isn’t coincidental.

In its original arcade incarnation, Section Z is a little simple – there’s not much in the way of weapons, the bosses are a little easy, and outside of a few flashes of inspiration, the level designs are fairly standard. But the multi-scrolling levels ensure some variety, even if visually much of it looks similar until the final stages, and it’s challenging without being too difficult. 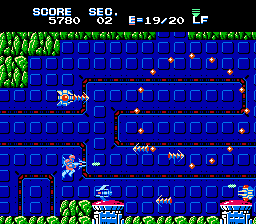 Capcom ported Section Z to the Famicom Disk System (in Japan) and on cartridge for the Nintendo Entertainment System (in North America). However, it’s been drastically reworked for the home audience, only keeping the basic concept of a guy in a spacesuit fighting through an asteroid base.

The developers of this port seemed to have been inspired by Metroid, so instead of just fighting through one long linear path, the asteroid is broken up into 60 discrete sections, which in turn are subdivided into three areas, all woven together like a gigantic labyrinth. Each floor is pretty short, typically less than a minute long (though some scroll faster than others), and at the end, you can choose to go upwards or downwards. At the beginning of each floor, you’re given a section number, which helps indicate your location, since otherwise many of the areas can look identical, at least at the entrance. All levels only scroll left-to-right, removing the multi-directional layouts of the arcade game.

While technically you can bumble around and just try going through different exits at random, there’s a good chance you’ll find yourself in a loop, replaying the same areas over and over. You really need to draw (or reference) a map to figure out where you’re going. There are also hidden warps and rooms in many of the areas, often found either by paying attention or experimenting. Every once in awhile, at the end of a section, you’ll also find a teleporter path with a red laser. These will kill you if you step into it, unless you find the nearby generator and destroy it. The generators effectively act as sub-boss battles, with the big fights taking place at the end of the three major areas. As a bonus, defeating these enemies will grant energy expansions, so you can take more damage. 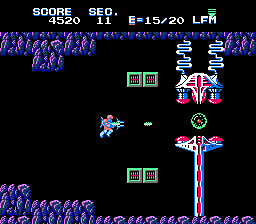 The damage system is actually pretty weird. You start with 20 energy points, with projectiles typically knocking off a point or two, while colliding into enemies will kill you immediately, sending you back to the section entrance and taking away five points. Technically your remaining lives don’t matter all that much, considering you can continue as much as you want. However, if you run out of energy points, you’ll taken all the way back to the area entrance, though at least all of the generators you’ve destroyed stay dead, so you don’t need to replay everything after this happens. Luckily, energy restoratives are commonly dropped by enemies.

The controls have changed so that instead of turning, the B button will shoot left and the A button will shoot right, similar to Side Arms, itself a spiritual successor to the arcade version of Section Z. With this, however, the grenades are gone. Instead, certain areas have pods that can reveal extra weapons, which are stored and can be equipped at any time, though you lose them upon death. There are also three super “STS” weapons, activated by pressing both B and A at the same time – these are powerful, but consume energy points. You only start with the Mega Missile at first, but hidden in the labyrinth are two others, the Flash Bomb and Crush Ball, which damage everything on the screen and provides a shield, respectively. These are all important, because the bullets can sometimes become extremely dense, often causing huge amounts of flicker.

The NES Section Z is one of the few exploratory shooters, a subgenre with only a few games like Tecmo’s Super Star Force and Bothtec’s Topple Zip. There’s a reason why these experiments didn’t last long beyond the 80s, and that’s because having to replay the same areas over and over – not as a punishment for dying but because that’s part of the design – is just kind of tedious. Still, Section Z is one of the better ones, if mostly because the stages are pretty short, and provides a good balance of being challenging without being too difficult. It’s also a pretty good improvement on the arcade game, even though by changing the structure, the whole “alphabetical sections” thing, and therefore the title, totally loses its meaning. 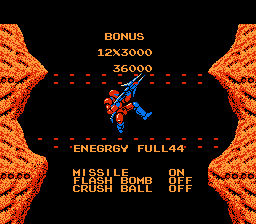 The only real differences between the Japanese FDS and American/European cartridge release is that the former includes the ability to save the game, plus minor differences in the ending cutscene. If you know exactly what you’re doing, you can beat the game in under 45 minutes, but otherwise the ability to save makes venturing through the asteroid much less laborious. The hero is unnamed in the Japanese version, but in the English version, he’s referred to as Captain Commando, the heroic mascot created by Capcom of America to market their NES games, who was later given a makeover by Capcom of Japan and given his own Final Fight clone. 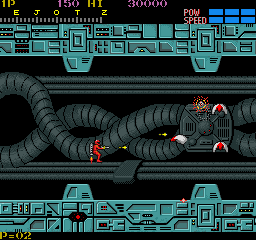 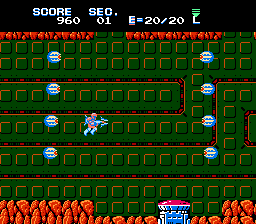