S.C.A.T.: Special Cybernetic Attack Team is one of the better shooters the NES has to offer, featuring excellent graphics and music. It’s very much in the vein of Capcom’s Forgotten Worlds, which had been released in the arcades two years prior. Both games are two player side-scrolling shooters where you control human characters with jetpacks, fighting against alien hordes. Capcom skipped over the NES when porting their game, making Natsume’s S.C.A.T. a suitable alternative.

The story of S.C.A.T. is explicitly cheesy, in an 80s action movie kind of way. The prologue details how an alien attack is underway, commanded by the cartoonish sounding Vile Malmort. It’s up to the members of the S.C.A.T. team, having received orders from the President of the United States himself, to stop the invasion. These guys just so happen to be named Arnold and Sigourney, an obvious nod to the popular action stars from the era.

The game consists of five stages. The scrolling alternates between moving horizontally (left-to-right) and vertically (both upwards and downwards). Although you only have one life, you can take multiple hits. There are also various powerups, denoted by letters – B, L, R, S, W – standing for Bomb, Laser, Recovery, Speed and Wave. The Wave upgrade is arguably the best weapon, given it has the largest blast radius, and once you get it there’s really no reason to use any of the other weapon powerups. There’s also an auto-fire function which really helps reduce the difficulty.

Additionally, two tiny robotic orbs assist you in your battle by rotating around you and firing whenever you fire. They move back and forth on their own, but by pressing A, you can also fix or unfix their position, allowing you to concentrate your fire in a specific direction. This is incredibly important, especially in the vertically scrolling sections, considering your main weapon can still only fire left and right. It serves as a nice contrast to Forgotten Worlds, which used a rotating joystick to aim your fire. That worked in the arcades, but was always clumsy in the home ports, so S.C.A.T.‘s alternative is very welcome. 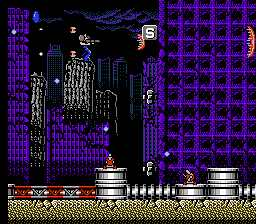 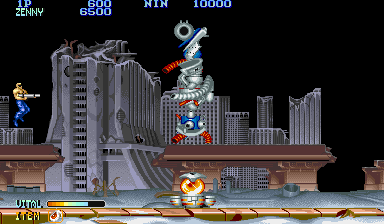 The graphics are fantastic, as the artists did an excellent job creating a sci-fi post apocalyptic landscape using the limited capabilities of the NES. Forgotten Worlds features an invading mystical alien force that’s like something out of ancient Egypt, while S.C.A.T. places more emphasis on mechanical beings. The third stage is reminiscent of R-Type, where you slowly circle the perimeter of a gigantic battleship, slowing taking down its defenses before moving into to attack the core. The fourth stage has some excellent animated effects, with cannons that fire laser beams that bounce off walls that you must navigate around, as well as moving columns that function like pincer claws.

The music was composed by Kiyohiro Sado, who was a regular at Natsume, and also composed many classics Konami games. The sound is very similar to other Natsume NES games, like Shadow of the Ninja and Shatterhand, and is just as excellent.

The Japanese version is quite a bit different from the English versions. Unlike S.C.A.T., Final Mission has a much darker intro, which features a flaming laser decimating a human city, and then shows the overhelming invasion of enemy forces from outer space. This cinema’s depressingly bleak tone was probably the kind of thing Nintendo would’ve deemed unsuitable for children. You can also see more of the Forgotten Worlds influence with the Japanese artwork. The characters are not based on Arnold and Sigourney – there are no close-ups of their faces at all – and their sprites are slightly different. In the English version, the blue player gets a buzzcut, and the red player gets a bandana. In the Japanese version, they look almost identical, just with swapped color schemes. The English version features a map between levels, similar to Castlevania and the Famicom version of Contra. Levels 3 and 4 have also been swapped.

There are also quite a few differences in gameplay. In what is an exception to the norm, the Japanese version of the game is much harder than the American version. The two orbs don’t automatically rotate, but instead change position based on your movement, making them harder to aim. There is no auto-fire function, and you lose power-ups when you’re hit. Furthermore, the orb shots are much weaker, and you also have less health. Altogether, it makes for a much more unforgiving game, to the point where the English version is preferable.

Beyond the introduction, the ending graphics are a little different. The Japanese ending credits also has a section dedicated for the bosses and the credits make use of various nicknames. The Japanese version has a barely decipherable voice clip preceding every stage. To contrast, the English version has a much more understandable (and much more hilarious) digitized voice, saying “You must destroy them. The Earth is counting on you. Good luck!” There is a fan patch which translates all of the text in Final Mission into English.

The European version is called Action in New York. It’s basically the same as the North American version, though Arnold and Sigourney have been renamed Silver Man and Sparks, and their squad has been renamed from S.C.A.T to S.A.T.

The game seemed to have stuck with Natsume as they released another shooter called Omega Five on the Xbox 360 that bares some stylistic similarities as S.C.A.T.. Gone, but not forgotten. 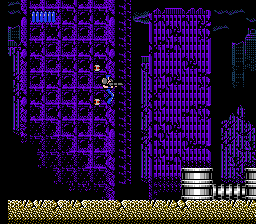 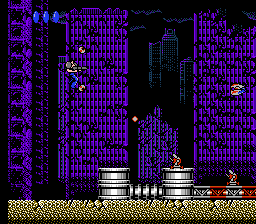