Earthworm Jim 3D failed to excite much of anyone, but Crave dug the series further into the ground with the Game Boy Color game Earthworm Jim: Menace 2 the Galaxy. Somehow, the development team, David A. Palmer Productions – once again, without the involvement of any of the original team – turned Earthworm Jim from a clever action game to a stunningly generic platformer, the type that are usually seen hanging around with Nickelodeon licensed titles. It was meant to tie in with the cartoon series – the cover artwork is done in the same style – but was released a good few years after it had finished airing. 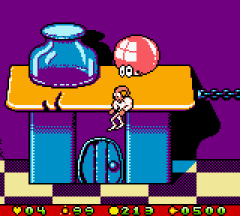 Absolutely none of the cartoonish charm has transferred to this game. One can’t expect all of the animation quality to transfer to a Game Boy Color title, but Jim barely even looks like Jim. A handful of familiar faces show up as bosses, like Evil the Cat, Bob the Goldfish, and Queen Slug for a Butt, along with Evil Jim from the TV show. But those are the only reminders that this is, in fact, an Earthworm Jim game. Forget the interesting levels of the console games – here, you’ll go through enthralling levels like “Graveyard”, “Desolation”, and “Sci-Fi”. The “wackier” ones like “Bedroom” and “Sweetshop” don’t show much more inspiration either.

Now, the Game Boy port of the original Earthworm Jim wasn’t great, but at least it kinda sorta played like the console games. This one isn’t even close. Menace 2 the Galaxy, like Earthworm Jim 3D, has been turned into a collectathon, where you need to explore each level to find a certain number of red coins – usually at least a hundred of them – before you can proceed. The levels are huge and tough to navigate, with platforms always frustratingly out of your reach, an experience further confounded by strange jumping physics. Occasionally you’ll find your rocket, which lets you fly through stage, but it has a limited amount of fuel. You can’t head whip anymore, with your only weapon being your gun and a handful of weapon pickups, which are all pretty clumsy. The graphics are garish – typical for a Game Boy Color game – and the music is all hideous. In short, there’s nothing good to say about Menace 2 the Galaxy. It’s an awful cash-in, and it’s sad that the series ended on such a low note.