Released in 1991, IGS/Alfa Systems’ Sinistron quickly got lost in the crowd both in Japan and in the US, due to the former country already having a several flashier CD-ROM games available and the latter’s game playing populace being fixated on the SNES and Genesis. Known in Japan as Violent Soldier (though unrelated to Hudson’s Star Soldier series), it’s still worth a look for its solid level design and some original ideas. 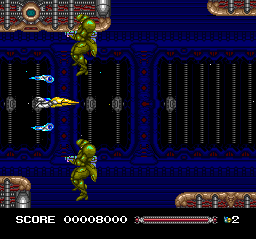 The most original thing about Sinistron is the huge metal beak that covers the front half of the player’s ship. More than just a decoration, it completely changes how the game plays. With it, instead of just shooting at aliens, ramming into and hovering very close to incoming enemies to destroy them is a great way to play through the game. Shoot-em-up veterans may see this as a more limited take on the iconic Force pod from R-Type, but it’s actually different enough to stand out as its own unique addition to the equipment and techniques that are now common to the genre. Power-ups include small drones that can hover above and below the player’s ship to absorb damage, speed improvements, and of course three different weapons.

Picking up those extra weapons is where that metallic beak becomes even more ingenious, it’s actually a metallic jaw. When fully upgraded, it can be opened and closed to different widths at will. Opening the jaws exposes the Cyber Fighter’s primary cockpit, but also  increases the volume of the firepower blasting out of it for each of the game’s three extra weapons. 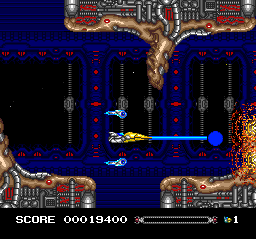 To balance this, the damage each weapon does is even distributed across each projectile being fired. It’s a great idea since the Cyber Fighter is a relatively huge target, meaning it can often be safer to stay still and increase one’s attack range rather than trying to evade incoming enemies or vice versa. The Cyber Fighter can also unleash a small blast of energy around it, this is charged up by holding down the fire button for a few seconds. It can be fun to play around with (try beating the first level without firing a shot) but does too little damage to be of use in the game’s much more challenging final areas.

The game also makes great use of the Cyber Fighter’s capabilities. The mass of asteroids in level four is particularly clever. As it starts, the rocks hurtling towards the player can easily be destroyed. As the level goes on, however, asteroids made of different types of materials come into play. Some have small turrets on them that fire at the player continuously. Others hurtle towards the player at high speed if they’re shot at at all. Some explode into many smaller pieces that have to also be destroyed or dodged, and some cannot be destroyed at all. 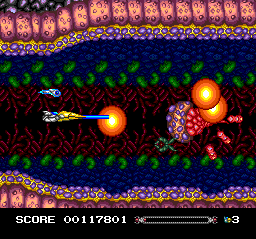 Halfway through the level the game throws every single type at the player at once, it’s extremely intense and satisfying to master. The third level has some strong visuals also, with a large number of plant and insect themed enemies that will require some tight maneuvering and good use of those deadly jaws to get through.

This stage also has the coolest boss in the game. At the level’s end the heads of two giant dragons are seen bound to the stage’s floor and ceiling, and the realization hits that you were flying in between these two ancient and gigantic animals for the entire level that have been dormant so long an entire ecosystem grew around them. They attack by spitting out smaller fiery dragons that can quickly overwhelm as they also spit fire at the player. Once the heads are destroyed, instead of hearing the triumphant stage clear music, what might possibly be their offspring suddenly flies onto the screen, continuously trying to ram into the player’s ship. 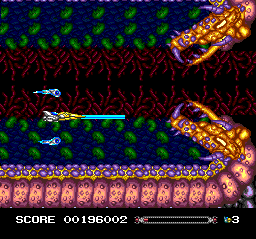 Sinistron‘s graphics are the work of Shimizu Taku and Jun Mikawa.  Taku is also responsible for the cyberpunk aesthetic seen in Download, while Mikawa would go on to do concept and visual design work for Psychic Storm. Sinistron‘s music is actually much better than how it’s described in contemporary reviews, though the tracks are unfortunately very short. It’s difficult to know who even composed it, as in the game’s credits they are listed only as “Terra.” This is probably Toshiaki Takimoto, who was doing sound work for Alfa System around this time, and there’s some similarity between Sinistron‘s soundtrack and Takimoto’s work on the humorously subtitled 1994 SuperGrafx shoot-em-up Aldynes: The Mission Code for Rage Crisis.

A few changes were made for the American release. The biggest is that story is dramatically simplified. In Violent Soldier, scientists observe a massive amount of debris and biological matter heading towards Earth soon after a supernova. When the debris actually reaches our solar system however, the large amount of biological matter in it convinces them that it’s not an act of nature, but an alien invasion. The titular “Violent Soldier” fighter craft are dispatched in their deep space fighters to investigate the source. What they find is the husk of a long dead civilization still being running on auto-pilot via a malfunctioning cybernetic intelligence that blindly uses whatever is left of it to wage war against whatever it perceives. It’s somewhat similar to the plot of Star Trek: The Motion Picture. 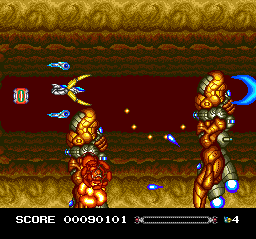 Sinistron has a more typical premise. A large cybernetic monster named Sinistron (the game is now named after its ultimate villain rather than its hero) swoops into our solar system and devours Pluto, a squadron of ships are dispatched to destroy it but are handily wiped out. The player takes on the role of the one surviving pilot from that mission.

The cover is also quite different. Violent Soldier features a, not surprisingly, violent depiction of the player’s ship escaping from the first level’s boss as its intestines are exploding out of its mouth. It’s understandable that this wouldn’t get a pass in the US, but rather than commissioning new artwork, the American publisher decided that less is more with just the game’s title and a space monster on a black background. At least there was better artwork when the game featured on the cover of TurboPlay magazine.

These changes of course do nothing to hurt the game’s look, and Sinistron still features the same level progression. Players will fly through the still populated ruins of this old world for three levels. The fourth level takes place in space against an asteroid field, and the final two levels consist of a grueling journey through the insides of the massive Sinistron (the cybernetic AI is given no name in Violent Soldier) itself. 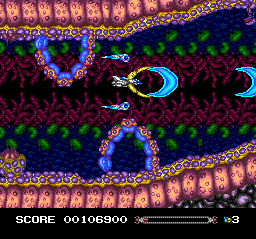 There are three alterations to the game itself, but have a noticeable effect on its difficulty level, making it unclear why Alfa System and IGS even bothered. The first is that the game’s checkpoints are slightly earlier in each level, but only by a few seconds. The second is that some mid boss movement patterns are simplified, but since these larger enemies are already so slow and limited in their attacks it has little effect.

The third is the most questionable, when starting Violent Soldier, players can hit select to bring up a sound test and also switch the game’s difficulty from normal to easy. This is removed from Sinistron meaning US players can only play on the normal. It doesn’t make a huge difference, as the only thing it changes is how many hits it takes to defeat each enemy. Enemies in this game aren’t very durable to begin with, but it still seems like a pointless thing to take the extra time to remove.