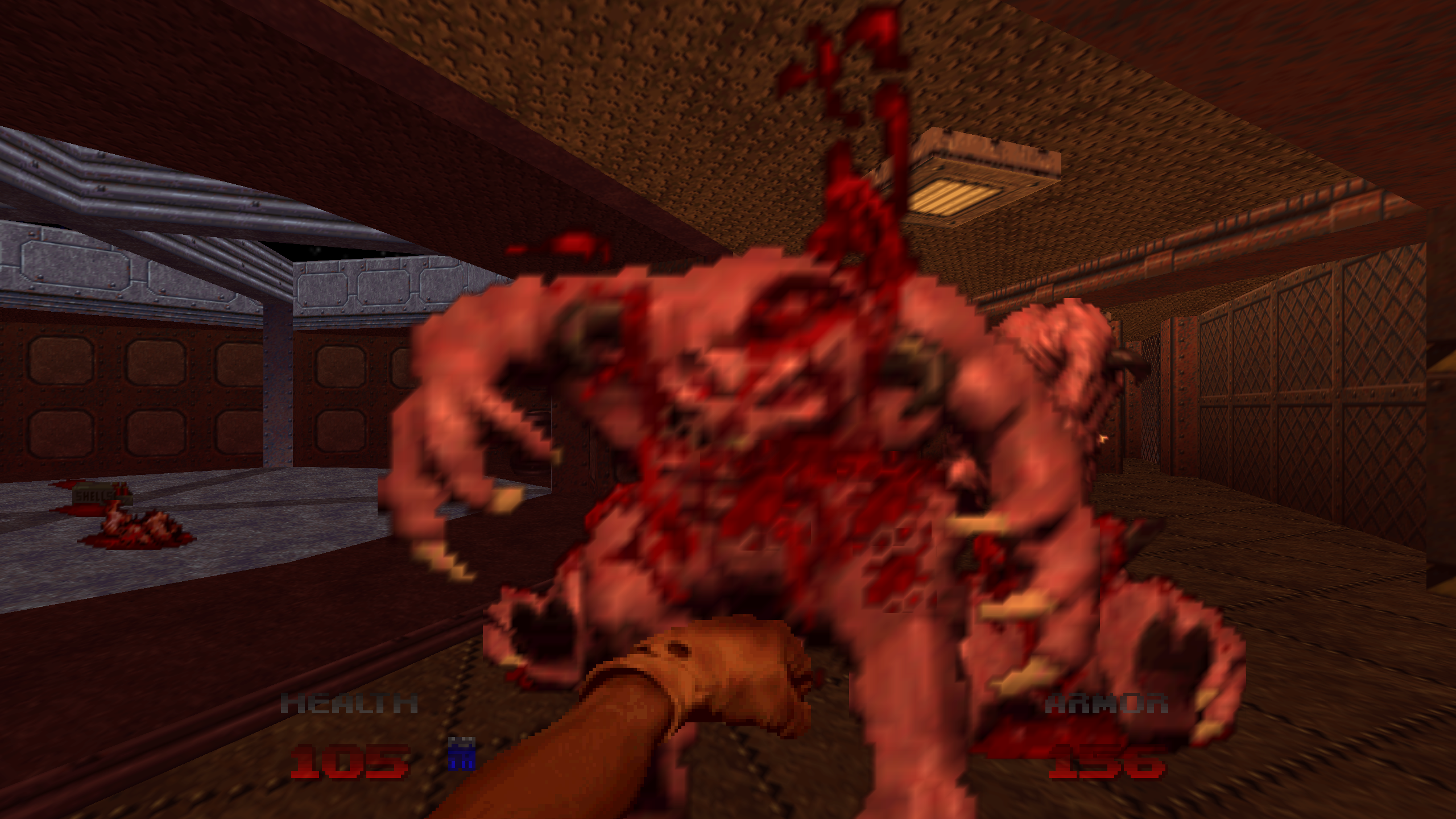 Williams Entertainment, the company behind the Doom PS1 ports, were apart of a larger company called WMS Industries, which also owned Midway, a gaming company you may have heard of. Towards the end of 1996, Williams Entertainment was renamed to be apart of the Midway branding, which is why the same team as those PS1 ports made an original Doom game under a completely different studio credit. 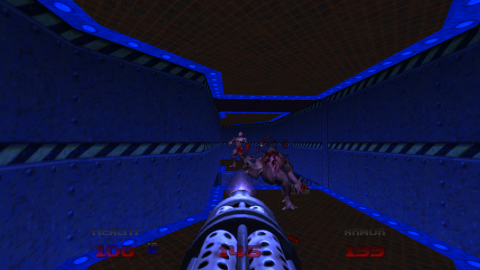 It’s still the same guys, mind you, and they had been working on this particular game since 1994 with guidance and final say from Id Software, if you can believe it. It was under the working title of The Absolution, which is a fantastic title that for one reason or another got the much worse title of Doom 64. This caused confusion as a lot of people, for a very long time, had no idea this once N64 exclusive was a completely original Doom game, a direct sequel no less. It was assumed to be a port just pointing out that it was the N64 version, but it is much more than that. Doom 64 is a unique creature in the Doom franchise, with a mood all its own and with some fun new elements that had never been seen in the franchise until now. Some would even argue this to be the real Doom 3, and yeah, the fact it’s a direct sequel and not a reboot would make it a proper Doom 3.

Doom 64 is set some time after Doom II, the Doomguy having severe PTSD from all the demon murder and murders committed by demonic entities and having to back into the thick of it due to a powerful demon bringing back the demonic dead. Called the mother demon, it is mutating demon flesh into new forms, and the Doomguy is sent in to deal with it since he, you know, kind of stopped a demonic invasion all by himself so he’s probably the right guy for the job even with the Hell struck PTSD. The bits of writing in here are much edgier then before, and that somehow makes them goofier, the primal muck that would become the modern Doomslayer clearly present here. 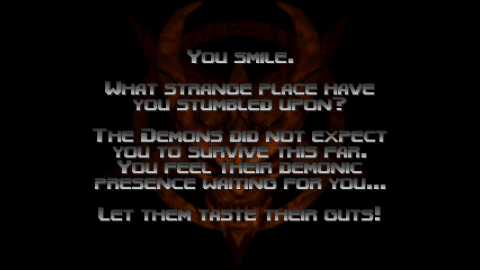 You’ll notice very quickly that this is very unique among the classic series. This is Id Tech 1, but heavily modified to allow for more complicated traps and scripted events. Doom 64 lacks a lot of the spectacle of Doom II, due to the limited space on the N64 carts limiting the size of mobs for most levels (there’s still a few with big numbers), but the new tech allows for more memorable levels in terms of surprises it has to share. The first secret level, Hectic, is a great example, with its big ending trap where the entire room reshapes to be a tense walkway above a death pit, along with old tricks like the two closets filled with hell knights. The level will also teach you that the rocket launcher also has recoil now, as you’ll most likely unfortunately learn by falling in the death pit.

Besides Hectic, Doom 64 is generally fair, outside the odd obnoxious pit trap, as the game doesn’t give you ways out often. The difficulty levels are also a bit weird, with the equivalent to Ultra Violence being the hardest difficulty called Watch Me Die. That title was probably more fitting in the original release because Doom 64 didn’t have saves during levels, only after, and it was also way too dark on first release. 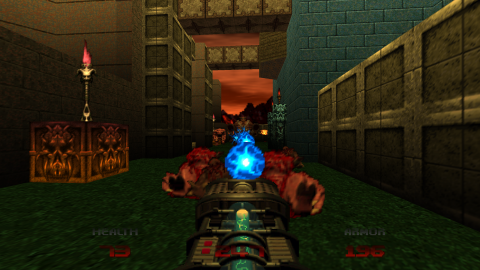 Monsters from Doom and Doom II are included, with exception to the chaingunner, spider mastermind, arch-viles, or revenants, though the last’s still has their homing missiles left over for a trap on one level. Some monsters have also been tweaked, including letting hell knights and barons in-fight, and the game has a unique final boss and the fast fireball shooting nightmare imps. All the weapons return, however, with more limited animations, but this has the side effect of making the super shotgun lead faster and making it the new workhorse weapon for the whole campaign. The BFG gets nerfed a bit due to how the game handles its damage spread, but that’s okay because the new addition more than makes up for it.

Doom 64‘s unmaker is a ridiculous weapon. It starts as an energy weapon that shoots lasers that works great at a distance, but isn’t too impressive. Thing is, three of the four secret levels have items called demon keys hidden in them, and earning demon keys boosts the damage output of the unmaker to the point it eats pain elementals and barons for breakfast, and can cut through a cyberdemon’s health fairly quick. It is easily the highlight of the classic arsenal alongside the original BFG, even making a return as the final weapon in Doom Eternal, though with a modified projectile to better fit a fully 3D game. 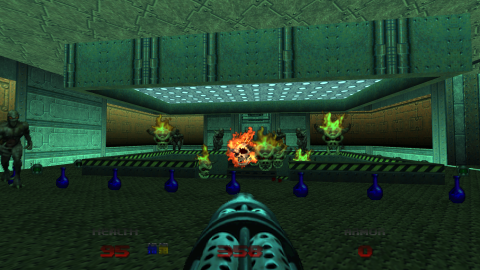 You may have also noticed that Doom 64 is much darker and more colorful than the original games. It has a richer color palette and colored lighting tech that still looks fantastic to this day, which it is well aware of with an early level showing off a black hall with red textures mixed in leading to a beautiful neon blue hall after. The monsters were rendered as pre-renders instead of hard models, like Rareware’s Donkey Kong Country series and Killer Instinct, that results in them looking less goofy and often more threatening, except the cacodemon and is dumb new face and skinny arms. The pain elemental makes up for it by looking like a nightmare with its two horrible mouths. A lot of sound effects are new, so awkward animal sounds are switched out for stuff that actually sounds demonic. It also gives the weapons more of a kick, especially the supped up chaingun.

At the core of this new atmosphere is the returning Aubrey Hodges, who strayed far away from the rock and metal for focusing on ambient noise, resulting in some extremely effective pieces for making a mood. “Breakdown” is probably the stand out just for the bits where the music literally sounds like it’s having a mental breakdown. It’s an interesting take on the series sound that he had been building with the PS1 ports, and finally cements it here. You can also thank him for the rest of the sound work, the whole team in sync on their unique take on this famous franchise. 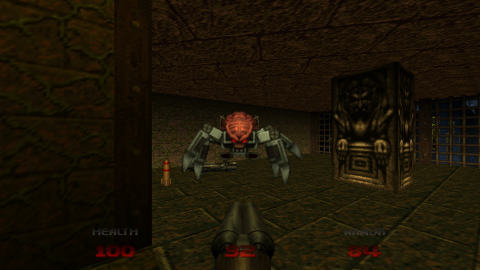 This even extends to the design of the levels. Along with having more switches and puzzles that take advantage of the new modifications, there’s a greater focus on making places that actually resemble something that could possibly exist, especially in the first third on the UAC bases. The hell levels, making up the majority of the game, even stick out as unique with a heavy focus on castles and old world architecture, with a few surprises like the last secret level having simulated 3D depth via bar hallways that show the empty sky around you. All the tweaks and changes mixed with this team’s particular taste in maps allowed for a unique Doom experience that still hasn’t been replicated in the official release line.

This is still Doom, of course. You strafe, the Y-axis is a theoretical shrug, demons appear and you shoot them in the face with Gun, find the card keys, get to the exit. It’s just a different flavor of it, has the base there but adds a certain flavor that really sticks with you. It’s an interesting way to handle a sequel, and it’s nice to see that the current handlers of the franchise seem to have a great deal of respect for it. The current director and writer for the series, Hugo Martin, has a soft spot for this one in particular, thus Eternal doing so much to work it into the new continuity. Said game also had the remaster by Nightdive Studios as a pre-order bonus, now available for purchase all on its own, bringing it officially to the PC for the first time, among other platforms. 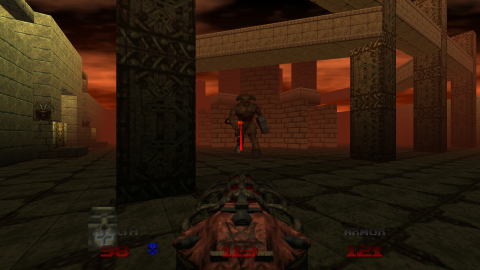 Nightdive Studios has a near spotless record in their remasters, and Doom 64 is no exception. Lots of quality of life improvements, including quick saves, widescreen support, and some buffed up brightness that actually adds to the game’s style rather than detracting, letting you see all the cool touches the team put in every level while remaining moody with the colored lighting system. You can thank the work of Samuel Villarreal, aka Kaiser, who made this version off of his Doom 64 EX unofficial port. Worth noting that like most all Nightdive projects, this version was made in their KEX engine, an extremely versatile engine made for the sake of re-creating old games with some modern flourishes and touches while making sure they behave as they once did before. 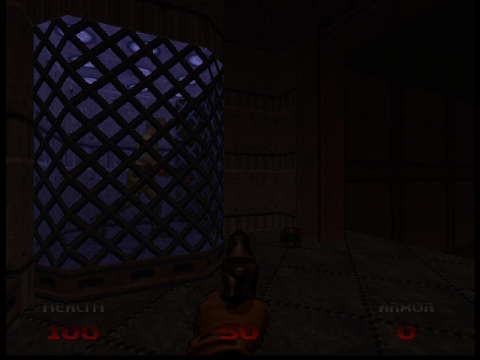 It’s almost surreal seeing the love Midway’s take gets these days, considering the reception when it first came out. Doom 64 was seen mainly as another Doom game. A good Doom game, a very good one, but a Doom game nonetheless. Doom was absolutely everywhere by 1997, and both Quake and Duke Nukem 3D came out the year before. Doom, as a franchise, was stretched thin by 1997, having four main games in five years and a flurry of ports of varying degrees of quality and uniqueness. The future was here, either in full polygonal 3D or environmental interaction and quips stolen from 80s action movies. Heck, even on the N64, Doom 64 was being shown up by the Turok games, and it would only be a few months before Goldeneye 007 stole the entire world’s attention. It was a great game, but it was also another Doom game, and general audiences were getting tired of Doom games.

That’s Doom 64‘s awkward legacy. It is arguably the best Doom game of the classic era, with the best tech and with inventive ways to use it, not to mention its harsh, dangerous tone. It just came out at the worst possible time, where the future was rapidly coming, and everyone was fighting to be it, including Id Software. Doom had become a relic in just half a decade, several studios building on it and often surpassing it in tech or design. Doom 64, however, showed that despite the limitations, Doom could still be something amazing. Just harder to stick out when your own parent company is playing with a new toy and the competition was offering something nobody had ever seen before. 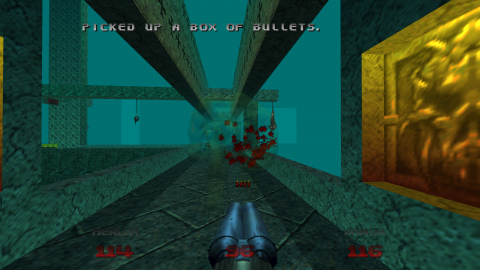 This would be the last Doom game until 2004, the now completely in power John Carmack focusing on Quake for the meanwhile, letting other developers (mainly Raven) play around with their toys – except for Doom. It was in the past, like the old Id Software, and when it returned, it would be a very different experience.