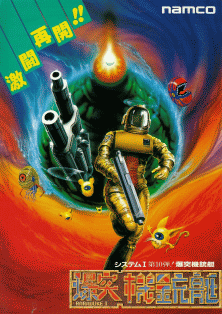 The Japanese part of the title of the Baraduke sequel, meaning “Big Assault Machine Gun Vessel”, refers to the contraption piloted by Takky and Hommy (there is no Kissy, which may mean that Kishimoto didn’t work on this game) in this new adventure to save the Paccet planet. This time the similarities with Metroid are negligible, while the ones with Section Z became stronger, and there’s a bit of Gradius in the mix as well. 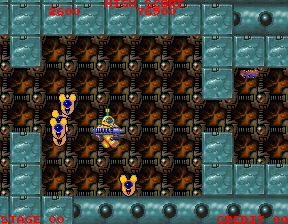 It’s no longer needed to find the Octy and open the gates, now to get to the exit you just have to go right and survive. The random elements have been reduced as well, since there’s no more shield roulette and the capsules left behind by the Octy are color-coded about their contents. This time the Paccets have also become more proactive and have lost the urge to kill themselves. When you save them, they will follow you around, since the new hardware can handle them, and shoot the enemies like the Options from Gradius, provided that you found the appropriate power-up. If you shoot them, they will blow up and leave behind their eyeball, which can be picked up for a single point, whose purpose is to mess up the score (scoring points was kind of a big deal back then) and also show everybody that you murdered poor defenseless creatures.

It seems that everything has become easier, right? But no, they still managed to make this even more frustrating. The levels are obviously shorter and much more linear, but they are still filled with the same ridiculous amount of stuff (including the floating Paccets and their bullets), to the point that they feel cramped, and in some moments it’s hard to figure out what’s going on. There’s a new mini-game this time, appearing before the boss levels and whenever you lose a life: since there are no more shields, it instead offers gun and speed power-ups/downs, the Machine Gun Vessel, another Paccet, or the ability to give your Paccets vessels of their own. The downside of this is that the gun’s default power is very low and sometimes it’s easier to avoid enemies instead of shooting them, turning the levels into obstacle courses and kind of defeating the point of a shoot-em-up. 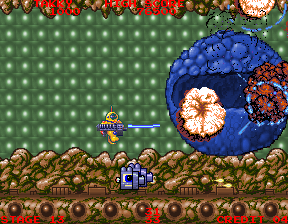 The ultimate “screw you” to the players, however, is that not only shields have been removed, but also you start with only one life: this means that one hit and your game is over, unless you picked up the Vessel and/or scored enough points to get an extra life. Inserting another coin also makes you restart from the beginning of the level, unlike the previous game where losing a life resurrected you on the spot. Basically, the game suffers not only for these ridiculous limitations, but also for forcing the original’s playing style on a more standard shooter structure, making a hybrid that’s both slow-paced and chaotic at the same time.

The graphics have more muted colors but are overall less dark and the general tone is more cartoonish. All the sprites have been redrawn and are rounder and more detailed, and the new additions to the cast are things like two new kinds of evil Pac-Men or brains encased in bouncing spheres (prescient of Futurama‘s Brain Balls). Added to the jetpacks is an improbable head propeller a la Doraemon, and when hit they don’t explode but have their faces comically covered in soot, a gag from old-style catoons. There are BGMs and new sound effects now, but they don’t leave any impression, unlike the original’s unsettling minimalist “score”. 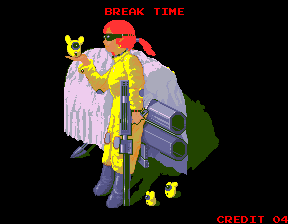 It seems that the designers wanted the Paccets to become the new franchise mascots like Goombas or Slimes, since there’s an abundance of them: beside the regular yellow kind, there are also the invincible white ones, the evil black ones, a huge ugly individual as a late boss, and even the mustached “old sage” Paccet that leaves comments between levels and hosts the roulette mini-game. Also, the “I am your friend” vocal sample gets spammed at the beginning of every level, making it annoying. Paccets are even part of the transition animation between levels! However, since this game bombed, they were relegated to a few sparse cameos in later Namco productions. Indeed, like the original title, Baraduke II was never ported until the Wii Virtual Console release in 2009.

Kissy did not fare much better: Namco abandoned her too until 1999, when the first Mr. Driller game came out. She was rechristened “Toby Masuyo” (from the Japanese phrase “Tobi de arimasu yo”, meaning “I can fly”) and revealed as the mother of Susumu Hori, that game’s protagonist. The father was none other than Taizo Hori, AKA the guy from the ancient Dig Dug series. She made appearances in the Mr. Driller series and also in Namco x Capcom, but never received a reboot, remake or re-imagining of her own series. To top it off, it’s said in those games that she and Taizo went through a bad divorce and she’s still bitter about it (maybe that’s why she didn’t appear in Baraduke II…). The only one who cared at all was some guy who made a Baraduke Revolution fan-game for the series’ 29th anniversary. 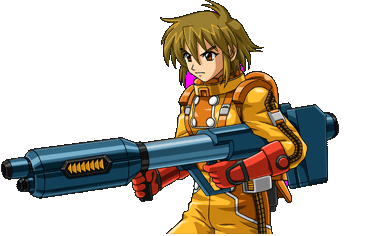 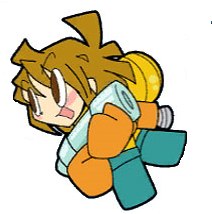