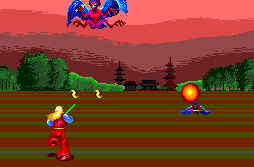 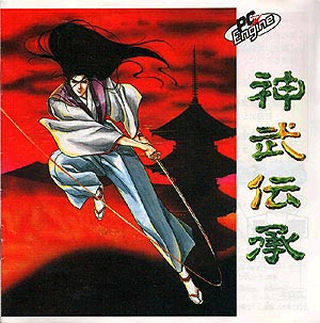 Space Harrier‘s release in 1985 was followed by many imitators. Their quality is as varied as their settings, running the gamut from excellent, successful games like Panzer Dragoon to ones that are only remembered for their mediocrity like 3-D WorldRunner. Somewhere between those extremes is Jinmu Denshou. It’s not a great game, but a very forward thinking one for its time and especially for the hardware it was designed to run on. 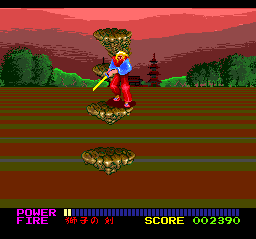 Jinmu Denshō‘s structure and pacing is wildly ambitious: An intense 3D platform action game made for the PC Engine in 1989. While it looks like a simple Space Harrier clone on the surface, it has more in common with modern stylish action games. The scrolling even stays smooth throughout the game, which is more than be said for most console releases of Space Harrier. The only problem with the game is that the PC Engine can’t quite handle it. The scrolling is impressively smooth and fast, but enemy movement becomes choppy any time more than a few of them are on the screen at once. This can make it extremely difficult to keep up with, as the game’s enemies and the environment itself is merciless. 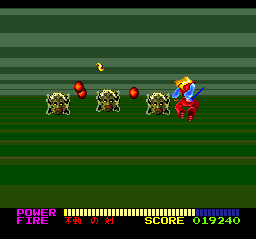 The setup is simple, monsters inspired by Japanese mythology have taken over and wrecked the land, and it’s up to one exceedingly blond samurai to run across the entire realm destroying demons. Players who complete the game will learn more about a kidnapped and possessed friend and also receive brief profiles of not only the bosses but every regular enemy in the game. None of this information can be seen until the very end of the game. Still, the enemies are a pretty typical array of ninja with magical powers and hovering undead horrors. The bosses on the other hand are great. They lack extensive animations, but the designs are effective. The way the boss fights play out is also very unique compared to other rail shooters. 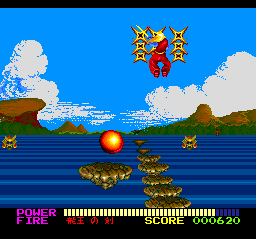 While the game may at first seem to force its hero to run forward endlessly, by tapping down he can be brought to a full stop at any time. He can also be made to run towards the screen and backtrack a bit, which is essential for grabbing any upgrades players have missed along the way or to realign themselves for a perfect attack. This allows for some ruthless platforming opportunities compared to other rail shooters, but also makes the boss fights much more interesting because it’s possible with the right timing to actually run circles around the bosses instead of waiting for them to close in on the game’s hero. Because the character can jump to different heights depending on how long players hold down the jump button, this can even be used to jump in and around waves of projectiles from the bosses. The boss of the fourth level is particularly well done. It’s a fiery floating face that fights by flinging fireballs, but to find it one has to fall into one of the holes scattered throughout the level. Here the screen goes dark and many large flaming arms reach out of the ground which must be avoided along with other pitfalls until the boss is discovered in this underground part of the level. 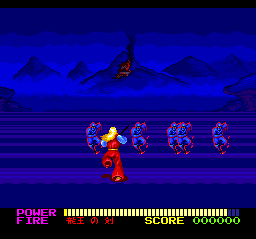 The final technique of the game’s hero is that by holding down the attack button, players can build up energy in his sword to unleash a more powerful attack. This will seem useless at first, but as the player picks up more items various projectiles effects are added to their regular attack. These attacks do significantly more damage to enemies when the sword is charged up and are vital if one wants to efficiently defeat the game’s bosses. There are other items scattered throughout the levels as well. These will have a variety of effects, and can heal or hurt the character, upgraded or remove his weapons, and even send him back to an earlier part of the level. Unfortunately all of these items are represented by the same package. Their locations are not randomized, but this can make it risky to grab every single one indiscriminately, meaning players have to constantly make the call as to whether they have enough power to make it to the end or not. 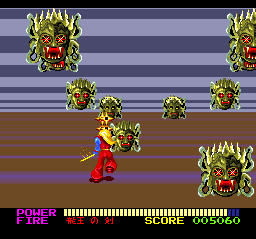 Jinmu Denshou‘s directors, Saitoh and Takane Okubo, waste no time before putting the player under extreme pressure. The game has eight levels, but by level two there are already a number of lethal obstacles scattered around the area that can be deftly run around or jumped over, but must also be carefully navigated through if the player wishes to find those precious upgrades to their sword. Then the third level comes, almost all of it is set over water, which causes constant damage. So instead of running along the ground, the entire level is played by jumping from platform to platform in the air. In level five players cannot stop running and are faced with a massive waves of both enemies and obstacles, however portals are scattered throughout the level which, if walked through, will turn any upcoming obstacles into weak enemies (GOOD) or any upcoming enemies into obstacles that can still move around (BAD). This is where the game’s extra movement options compared to other rail shooters really comes into play to set it apart from the rest and also why it warrants comparisons to some more recent action games like Otogi: Myth of Demons. Like in that game, players can even destroy enemy projectiles with a well timed swing of the sword, and each area of Jinmu Denshou has a unique twist to it. 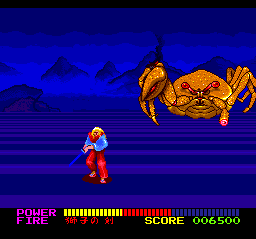 All of this sounds like it would make for a fantastic game, but Jinmu Denshou is unfortunately less than the sum of its parts. One glaring flaw is that the player is severely ineffective until they get one of those extra projectile weapons scattered around the battlefield. This means the best way to play the game is to carefully avoid enemies completely until one of them is found. It is possible to to fight enemies without one, but due to the amount of firepower the game’s infernal population will be throwing back, it’s very easy to get overwhelmed without any long range attacks for oneself. Some might find the game a bit too challenging in general, as each stage must be completed in one life. Fortunately Manjyudo was kind enough to have the game give a password each time a level is completed so that players can restart at whatever point they previously gave up on. 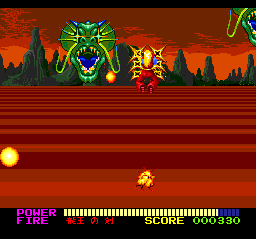 The most frustrating thing about Jinmu Denshou, however, is that there isn’t a separate gauge to show how charged up the hero’s attacks are. Instead, how powerful his attacks can be is tied directly to his energy, meaning the more damage he takes, the weaker his projectile attacks get. This is a huge mistake, immediately penalizing players for taking any damage in an already very challenging game. New players will have difficulty even defeating the first level’s boss without the projectiles and increased range that come with reaching the end of the level without taking any damage. The game’s sound design, on the other hand, is very effective. The music has a great urgent and at times tragic sound to it that complements the game’s structure and graphics well. Takane Okubo is again responsible for the game’s songs, but she’s also accompanied here by Masaaki Uno and the mysterious Goblin Sound. Telenet fans will probably recognize Uno’s name, as he was a major driving force behind both the music and production of Telenet series like Arcus Odyssey , Final Zone, and El Viento. In the mid 90s he began working with Camelot as a sound director for various installments of the Shining Force, Mario Golf and Golden Sun series. 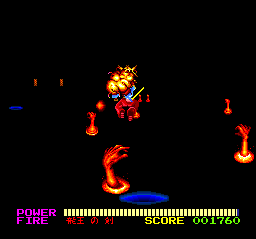 Manjyudo itself, however, was not so fortunate. Their next game, the abominable shoot-em-up Rock-On, is a lifeless imitation of far better examples of its genre. It and Jinmu Denshou are actually the only games that were published under the Big Club name. Manjyudo would develop one final game before ceasing to exist, a very good PC Engine port of the Nichibutsu shooter Formation Armed F. Jinmu Denshou can easily be dismissed as a terrible game due to its unbalanced challenge, but it’s an imaginative and interesting game at the same time. It’s a shame that Manjyudo didn’t put a similar amount of passion and effort into Rock-On, which failed to achieve the success of the games it imitates and caused Manjyudo to quickly fade into obscurity. Most of the individuals who made these three games under the Manjyudo name have done great work before and after, but the “TO BE CONTINUED” Jinmu Denshou ends with remains unresolved no matter how many times the game is beaten. For some help, putting in the password AG2EA-ICXBCK will put players at the start of a second loop through the game, but with their energy and weaponry full powered up, good luck!) 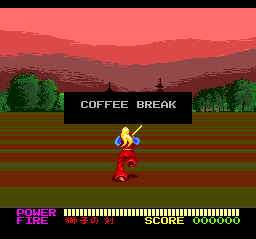